Three new food joints to check out this year 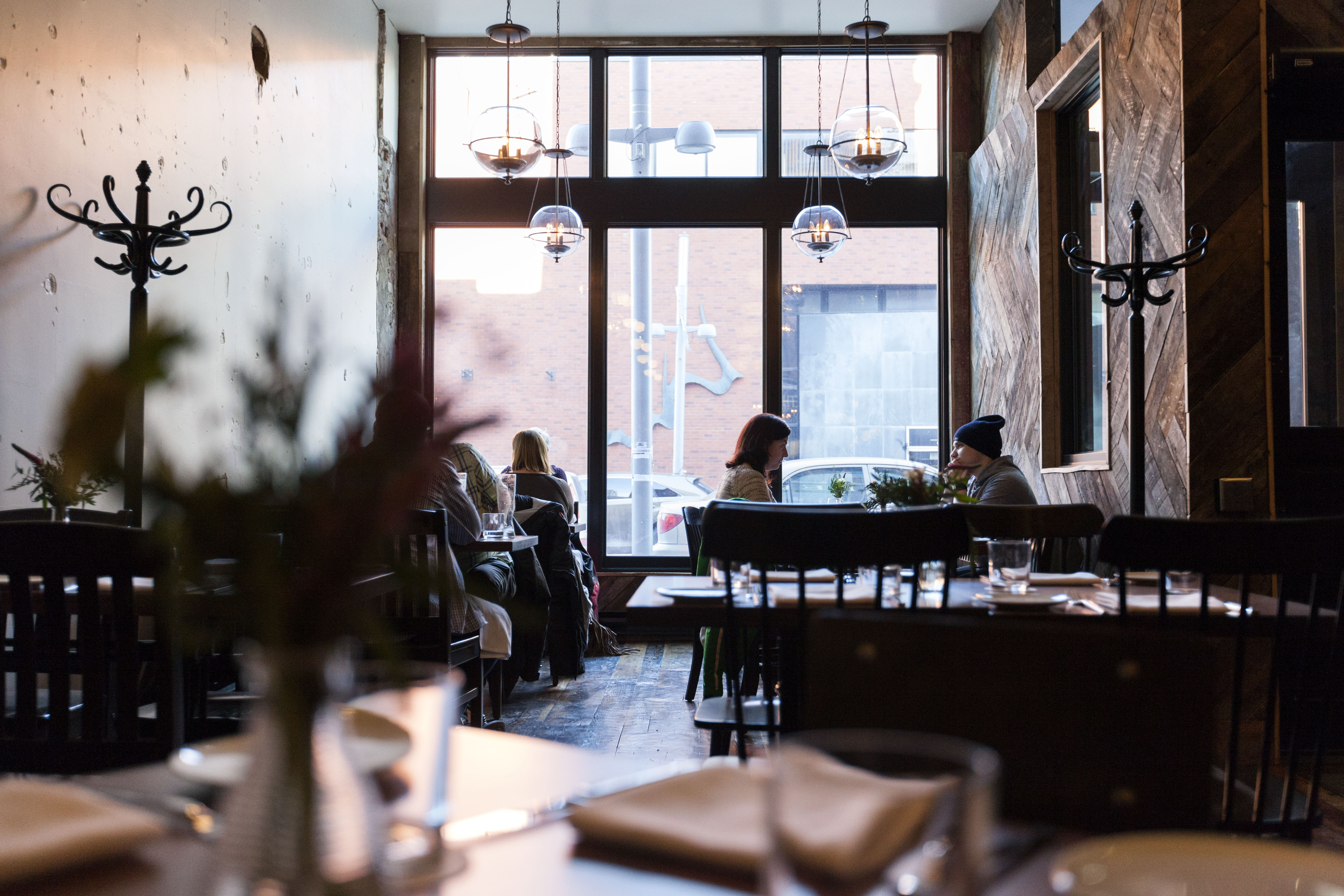 The Berlin in Kitchener | Photo by Andreas Patsiaouros

KITCHENER — The culinary exploits of Jonathan Gushue have not gone unnoticed in the tri-city area. As the former executive chef of the luxurious Langdon Hall, Gushue is known to be one of Canada’s most celebrated chefs.

His recent project The Berlin, located in downtown Kitchener, is no exception to the excellence in gourmet he so consistently creates. Gushue’s dedication to local produce is exemplified in the menu at The Berlin, which is updated every few days with modern perspectives on classic European cuisine.

As my date and I sat down, we were greeted by a friendly wait staff and a basket of freshly baked sourdough bread, served with the restaurant’s own chive butter. For appetizers, I opted for the pear salad with fennel, carrots and poppy seeds, which was dressed with buttermilk. This dish stood out to me as an example of how seasonal and local crops are featured on The Berlin’s menu. The use of winter vegetables and cool flavours made this dish very refreshing and its vibrant colours were contrasted with a heavy sprinkling of poppy seeds.

The standout main dish was the charred beef brisket served with leeks and parsnips. The beef almost melted in my mouth as I sampled my date’s meal and the rich smoky flavours were well complemented by the crunchiness of the grilled parsnips. The presentation was very simple, and there was little garnish to detract from the strong flavours of the brisket. For dessert, we shared the dark chocolate terrine with lavender ice cream, which was as delicious as it sounds. The floral notes in the ice cream complemented the richness of the terrine, which was further accented with a touch of salt.

The food was consistently delicious and demonstrated the length of thought put into every dish. The menu at The Berlin gives the impression that every detail of flavour is very deliberately selected to charm the palette of its customers. The restaurant’s decor rivals the quality of the food, as the building’s industrial foundations have been transformed with modern fixtures, ambient lighting and a dark wood floor, creating an intimate ambience perfect for romantic dinners.

The Berlin provides an upscale gourmet experience from the ground up, within a reasonable price range. This restaurant is a fantastic place to bring that special someone for an unforgettable night. 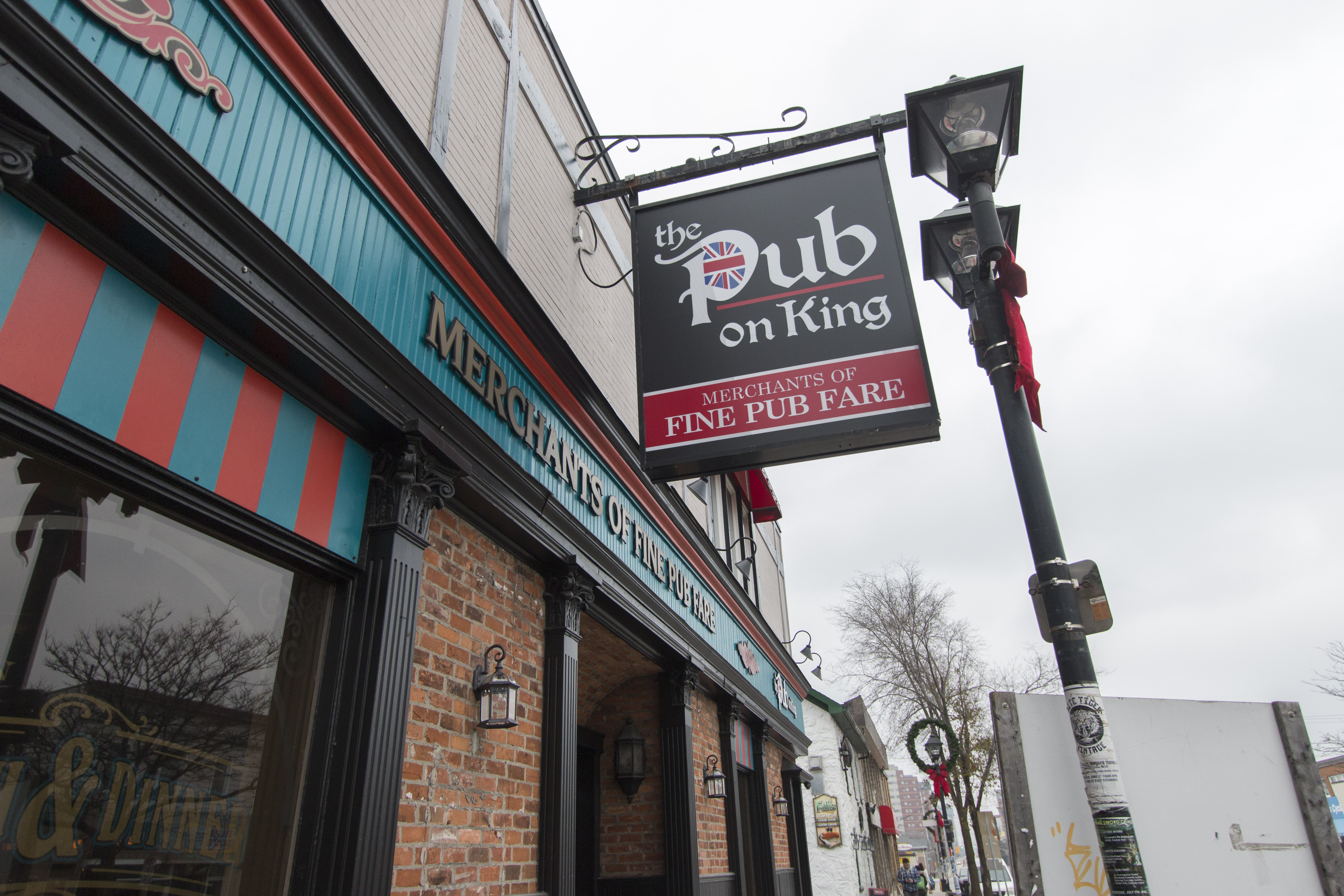 The Pub on King in Uptown Waterloo | Photo by Jessica Dik

The Pub On King

WATERLOO — I didn’t expect much going into The Pub On King, but walking away with a full belly and some money in my pocket, I can’t say I was disappointed.

Once known as Fox & Fiddle, The Pub On King offers up a wallet-friendly menu and a reasonable beer list. Similar to El Furniture Warehouse in Toronto, The Pub On King has a fixed-price menu where every single item is only $5.95, with add-ons ranging from $1 to $2.

The menu consists mostly of standard pub items such as fish and chips, burgers, wings and nachos, along with more unique dishes like the Sheppard’s pie bites. My date and I stuck to the classics. For under $20, we shared a burger and fries, fish and chips and a plate of nachos. Now, the portion sizes aren’t huge, but you really can’t go wrong with that price.

The burger recalled the classic McDonald’s quarter-pounder, with a bland, meaty savour that only frozen beef can achieve. Tossed alongside a modest serving of fries and you’ve got a sizeable meal without the sizeable cheque. A would-be forgettable burger experience will ingrain itself in the memories of poor students across Waterloo.

The fish and chips fared comparably to the burger. The batter was bronzed and crisp, while the ambiguous white fish flaked nicely. Sure, it wasn’t the best fish and chips I’ve ever had — hell it wouldn’t crack my top 20 — but I can hardly complain at that price point.

The sheepish serving of nachos remained the sole disappointment of the meal. I mean they tasted fine and all, but the portion-size paled in satisfaction to other dishes. Skip these if you’re aiming to get the most value for your money.

The atmosphere at The Pub On King was surprisingly balanced and inviting. Upon hearing of the infamous “Foxy Tuesdays,” I anticipated blaring EDM and a tantamount of slurred proclamations for shots.

The main falter of the restaurant is the price for a pitcher of domestic beer. A pitcher of Canadian or Budweiser can be around $18.25, an outrageous price for a common brew. But considering the cheap prices for food, it was expected something needed to make up for it.

The Pub has plenty of comfortable seating areas, and TVs strewn generously around the venue, making this the go-to spot for grabbing pints and watching the game in 2016. 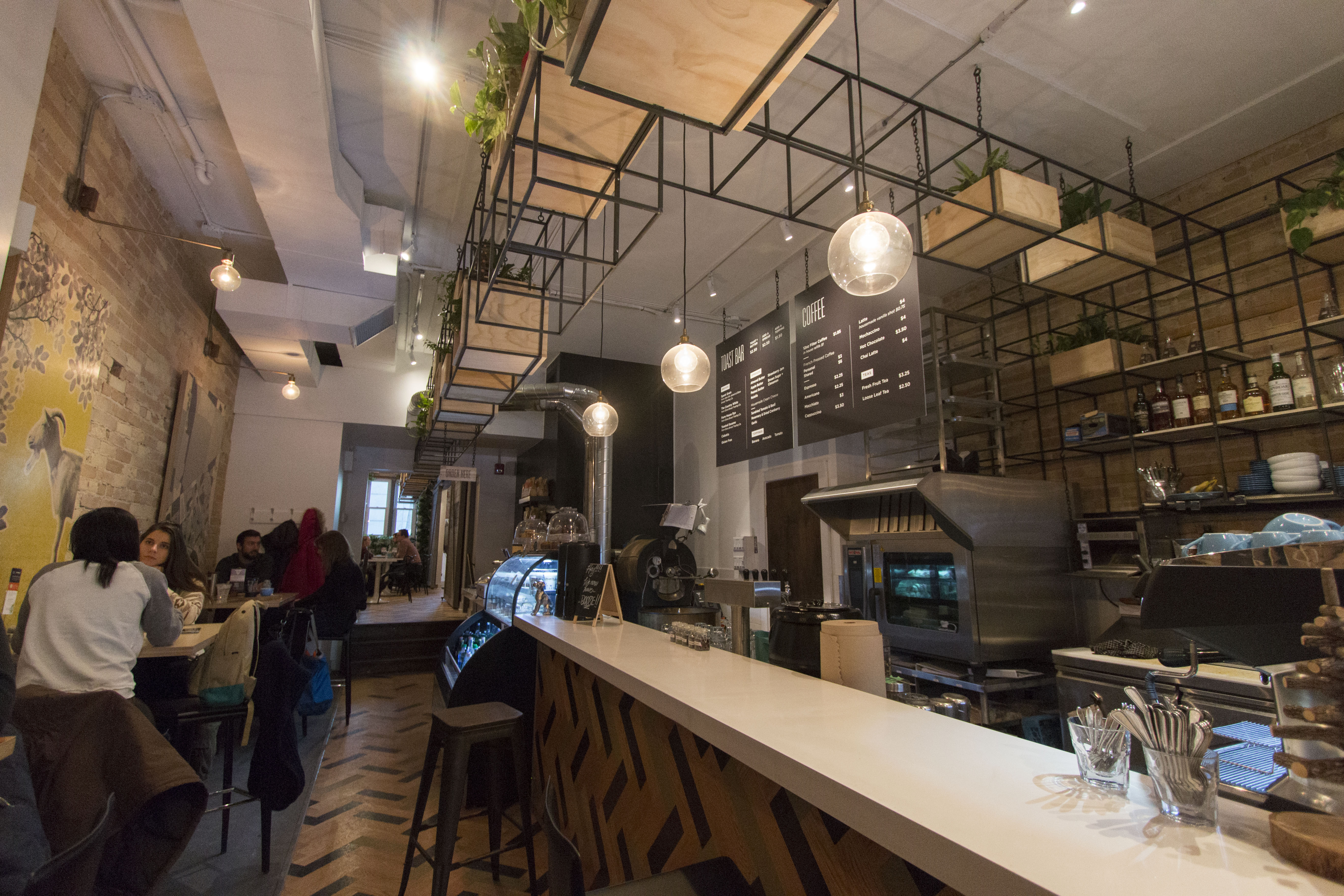 WATERLOO ­— The setting of your next Instagram post just opened in uptown Waterloo and it’s more than just a pretty face.

Settlement Co. rides on the coattails of its third-wave café counterparts with bright, acidic espresso and warm — not scalding hot — milk-based beverages. An antithesis to the bitter, robust standard set by the national heavyweights: Starbucks and Tim Horton’s.

Walking into Settlement Co., you are met with a dainty, eco-chic aesthetic. Fake greenery hangs above in naked grain containers, the barista stares intently as the crema flows from the porta filter, polishes his aerated milk, adjusts his beanie and meticulously ribbons an elegant latte design. A growing line of the acid-wash clad and Gregory Peck impersonators waits patiently, weaving between the high tables and set against a wall of modern abstractions.

The clean and minimal menu hangs high from industrial chain. And it all feels very deliberate. Settlement’s mantra isn’t coffee — it’s aesthetic, and they do a hell of a good job.

The menu features the greatest hits — coffee, lattes, cappuccinos — but where Settlement Co. stands in clear contrast to the other third-wavers is with its “Toast Bar.” Customers have a wide selection of locally baked breads and can outfit their toast with spreads, in-house made cream cheese or with fresh veggies. It’s a refreshing response to the unnecessarily niche and obscure food choices polluting many cafés.

The coffee at Settlement Co. is good, but it’s not for everyone. Some will say the coffee is too light or the milk isn’t hot enough, but this is all in line with third-wave trends. The generic, young coffee aficionado will tell you most coffee is over-roasted and thus the tasting notes of the bean are lost in the burnt rubble. Settlement Co.’s technique is certainly not mainstream, but they will continue to line patrons out the door for their beautiful yet flawed store design.

Beyond the smoke and mirrors of polyethylene leaves and wood grain is a dreadfully cramped and awkward seating area in the back half of the store. Look right and you’ll see a spacious seating area outfitted with square tables for two. But immediately to the left lies a two-level bench concept that attempts to fit the communal narrative of modern cafés, but in practice fares comparably to awkward high school bleachers. The benches feature small, square desks that are meant for your beverage or meal, but given the desks are situated below the knee, every sip or bite calls for hyperextension.

In case of injury, Settlement Co. ought to have an osteopath or attorney on site at all times.