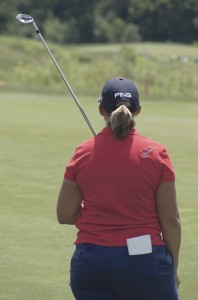 The eyes of the golfing world were on Waterloo this past weekend; and by all accounts the city did not disappoint.

RIM Park’s Grey Silo Golf Course played host to the inaugural Manulife Financial Classic, the first LPGA tournament in Waterloo’s history. And despite a few hiccups with the weather, namely heavy rains on Friday afternoon and some ominous clouds and brief showers on Sunday, the tournament seemed to go off without a hitch.

“It’s been awesome. It’s probably been one of my favourite tournaments so far,” said Swedish golfer Anna Nordqvist, who finished at 10-under, good enough for third place.

“You know, the crowds are amazing and the spectators know your name and cheer for you. It means a lot, this week, and I couldn’t have done it without them.

Nordqvist wasn’t the only one who appreciated the crowds. Several of the 144-golfer fields that took part in the tournament — which featured some of the LPGA’s biggest names like Michelle Wie, Paula Creamer and Stacy Lewis — were appreciative of the savvy, yet supportive Waterloo crowd.

“The crowds are unbelievable,” said Lewis, who ranks second in the tour’s rankings. “We were talking about that walking up 18. They were lining the fairways there and we always get good crowds when we come to Canada. So I love coming to play here. The fans are awesome.”

Even the course itself drew high praise from the players. Coming into the tournament, a large portion of the field was excited to play on at Grey Silo, which gained the reputation as a “bomber” course.

And if the 16-under score that four players had by the end of Sunday was any indication, the course certainly lived up to that pre-tournament billing.

“It was a fun golf course to play, very scorable, a lot of birdies, eagles. It was extremely fun to play,” tournament champion Brittany Lang told reporters. Lang, a Texas native, took home the title after winning a three-hole sudden-death playoff over Chella Choi, Inbee Park and Hee Kyung Seo.

On top of taking home the championship and the $195,000-prize, Lang spoke glowingly about her time in Waterloo.

“[The course] was in good condition. The fans were fantastic, as usual in Canada they’re fantastic, and the weather was nice, the towns are nice. It was a well-run tournament.”

The only other Canadian stop on the LPGA tour will come August 20-26 in Coquitlam, B.C.

The players weren’t the only ones to enjoy their time at the Manulife Classic. Over 66,000 fans converged on Grey Silo over the course of the weekend to enjoy the thrilling finish to the tournament and great four days of golf. Not even the rains on Friday seemed to deter Waterloo’s golf enthusiasts.

“We had a great time and I was impressed with how the golfers interacted with the crowd,” said Elisha Kehoe of Strathroy, Ont., who took in the final day of the tournament with her eight-year-old daughter, Taylor.

“I thought that was fantastic. [Waterloo] did a great job. I thought it was well organized, I thought everything ran very smoothly.”

“It was good and fun to watch,” added Taylor.

For some, however, the weekend wasn’t just about watching golf. Over 1,300 people volunteered at the tournament, doing jobs that varied from driving shuttles to keeping quiet on the course.

But the fact that they were technically working didn’t seem to dampen most of the volunteers’ spirits.

“I volunteered for the RBC Canadian Open two years ago, heard that the LPGA was coming to Waterloo and e-mailed them right away and said when will you have registrations open for volunteers?

Steele added, that in the long run, the tournament could prove to be a huge positive for Waterloo.

“Waterloo has been amazing and this course is beautiful,” she said.

“I think this is going to be a long lasting one if Manulife sticks around, it’s gonna be a long one. It really is.”
–With files from Shelby Blackely