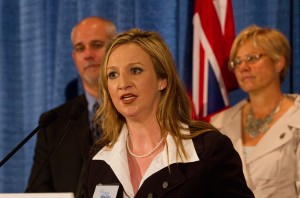 Now that the Liberal Ontario budget has passed, the threat of a provincial-wide election has now been averted and the spotlight has been realigned to the Kitchener-Waterloo riding and its upcoming byelection.

Ontario Premier Dalton McGuinty has not mentioned when he plans on holding the election, but he has until Oct. 27 to call the election. So far, the only major provincial party to announce a candidate has been the Progressive Conservatives (PC).

Elizabeth Witmer, the PC MPP for the past 22 years, recently took on the position of the chair of the Workplace Safety and Insurance Board. If the Liberals win this riding, then McGuinty has the opportunity to take a slim majority.

On Wednesday night, Tracey Weiler, a part-time MBA instructor and former employee at Research in Motion and PricewaterhouseCoopers, was nominated to be the PC candidate. Tim Hudak, the PC leader, joined Weiler on Saturday at her office opening in Uptown Waterloo.

“My job started the moment we won the nomination; figuring out what I need to do, putting a plan together, getting out and about in the community, on the ground, door knocking, understanding what the needs of community are and telling them a little bit about who I am,” explained Weiler at the opening of her office.

Hudak was there to welcome Weiler to the PC community in K-W. “And I think most folks in Kitchener-Waterloo, they want to see somebody to fight for them and who understands the challenges around the kitchen table, who has been involved in the community,” he said.

“To try something new and try something bold and different that will focus like a laser on jobs and the economy,” Hudak added about Weiler’s skills.

When asked how they hope to engage the students at Wilfrid Laurier University, especially if the election ends up being in September or October, Weiler responded by saying, “From being a business instructor at Laurier, one of the things that I hear from students is; one, they are concerned about the inability to get a job when they graduate.”

Karen Scian, the Waterloo city councilor for ward two, has also announced she is running for the Liberal nomination.

“Well I feel the time is right, I’ve worked very hard for the citizens of Kitchener-Waterloo as a city councilor, as a Waterloo city councilor,” explained Scian.

“Everything that I’ve learned about this community, you know the wonderful possibilities that lie ahead of us, those all combined to make a really great reason to grasp the seat.”

Scian noted that, because of her six-year long run as a city councilor and her involvements in the community, she has a strong advantage if she was chosen as the candidate.

“Obviously the citizens of Kitchener-Waterloo know who I am, and that I’ve been very busy working hard for them already for six years,” she asserted.

“The other advantage that this position gives me is that I already have a really intense knowledge of all the things going on in this community and what the vision of the future is, and I think that is a major advantage.”

In addition, Scian believes she can effectively engage the student body in K-W. “Students obviously play a huge role in our city as part of the Kitchener-Waterloo riding, they are a major part of what goes on in K-W, and I think it’ll be a very key part of the Liberal party’s platform to encourage students to participate in the vote,” she said.

Eric Davis, a Laurier graduate, local lawyer and former Liberal candidate in the 2011 provincial election, has announced that he will be running again.

The Ontario NDP party has not announced if anyone is seeking the nomination, but they have stated they will be holding that meeting in late July.