The Carnivore’s Conundrum: The Laughing Buddha 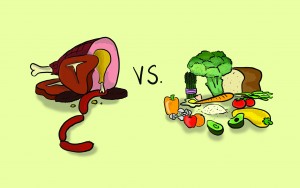 The beginning, at least according to Julie Andrews, is a very good place to start. So I decided to start one step before the beginning, by cleansing.

But what exactly is a “cleanse diet”? Essentially, it is a diet that aids in the purging of the toxins that our body accumulates over time. Bits of food, bacteria or fat get lodged in the stomach, small and large intestines and the colon; this diet helps to clean and clear those places out. Does that sound gross to you? You’re right, it is.

I took most of my information and recipes from a book called Super Cleanse by Adina Niemerow. It’s a fairly handy book that provides a number of different cleanses that you can do to your body.

For my own personal preference I started with, “The Laughing Buddha”, a call back to the Buddhist Deity, and one of the more gentle cleanses. It got its name due to the various use of Chinese teachings regarding diet.

Those being, vegetarianism, scarcity and the idea of a wholeness with our food. “The Laughing Buddha” is the title of the diet in the book, but I can tell you- this Buddha-bodied-boy was not laughing at all.

The goal of The Laughing Buddha is to not only cleanse but also to introduce me to a world of healthy eating while making me feel spiritually lifted. Naturally there were some good things, and a few unpleasant things during my cleanse week. Here are the pros and cons of “The Laughing Buddha”.

2. I discovered some foods that I normally would never have eaten. Ie. Millet? It’s what people feed chickens, but put it with some almond milk and coconut and it’s pretty good.

3. I snack, a lot. By restricting what I ate every day I could pinpoint a major flaw of my eating habits, and that is snacking too much.

4. I lost six pounds! If that’s not progress I don’t know what is.

1. For the first few days I felt like absolute garbage. Apparently this is normal because it’s a sign that the toxins “leaving my body.” That’s a pretty lame excuse for how crappy I felt. Also, a lot of the food was bland and gross.

2. It’s expensive. Health food is pricey, especially if you want to get organic or specialty foods. This is not a diet that can be sustained for a long period of time, as it gets very pricey, very quickly.

3. It’s a lot of work, and you have to clean a food processor just about every day.

4. It’s the dumps. It’s crappy. There are only a few ways toxins can get out of your body. One of the ways is through your skin; the other way, we’ll just say is pretty shitty.

5. What’s a Jicama? No body knows. Exotic foods are expensive and hard to find and are required for a ton of the recipes.

I would recommend doing this cleanse if you really are feeling sluggish and gross, but to just to do for fun, well it isn’t that fun. The meatball sub on cheat-day certainly was worth it though. I also found that, as I am not a 90-pound child, the amount of calories per day wasn’t enough to actually keep me going. Stay tuned next week for another episode of How I Met Your Blubber.

Spencer Dunn has transformed himself into a human guinea pig as he embarks on a quest to lose weight by trying different dieting techniques. Be sure to tune in and read his ongoing series of “The Carnivore’s Conundrum”. He also blogs about it here www.thecarnivoreconundrum.blogspot.com