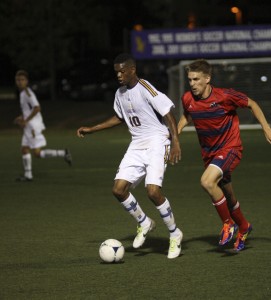 Coming off their third win of the season, the Wilfrid Laurier Golden Hawks men’s soccer team demonstrated positive results despite ugly conditions over the weekend.

The boys in the purple and gold battled cross-town rivals the University of Waterloo Warriors this past Sunday and managed a 2-1 win.

Laurier head coach, Mario Halapir, took the victory as it is — a victory, but a signal that his team still has some improving to do.

“We’ve got a lot of work to do as a group,” Halapir said. “Not quite the execution we would expect, but we’ll always take the three points.”

Sunday’s game saw a lot of intensity from both sides of the field. Shots were low, but referee calls were relatively high.

Laurier’s Robert Kardaras of Markham, Ontario scored the first goal of the game in the 12th minute of play.

This would remain the score for a majority of the match until Laurier veteran Matthew Maughn would put away one more off of a pass from teammate, Giorgio Delgado.

“Today was critical and we achieved that part,” Halapir explained.

“We made sure the boys knew that. There were some good plays, but just not enough consistency for my liking.”

A relatively young team, the Hawks are looking to revamp their skill level and make room for more consistent performances.

“I think we have a lot of learning to do,” Halapir said. “It’s just going to be a matter of how quickly we can get to that point where we can learn and  develop the mentality that is going to allow us to compete consistently.

“And I think that for right now that’s what we’re going to work on.”

With the win, the Hawks have now won three straight since their season-opening loss to the division leaders from York.

After defeating the Brock Badgers 2-0 on Wednesday, the Hawks find themselves with a record of 3-1 on the early season.

This places them second in the Ontario University Athletics (OUA) west division, which is an early improvement from last season, as Laurier went 4-8-4 and missed the playoffs after being eliminated from contention by the McMaster Marauders in late October.

The Hawks now look toward their next game on the road against the Western Mustangs this weekend.