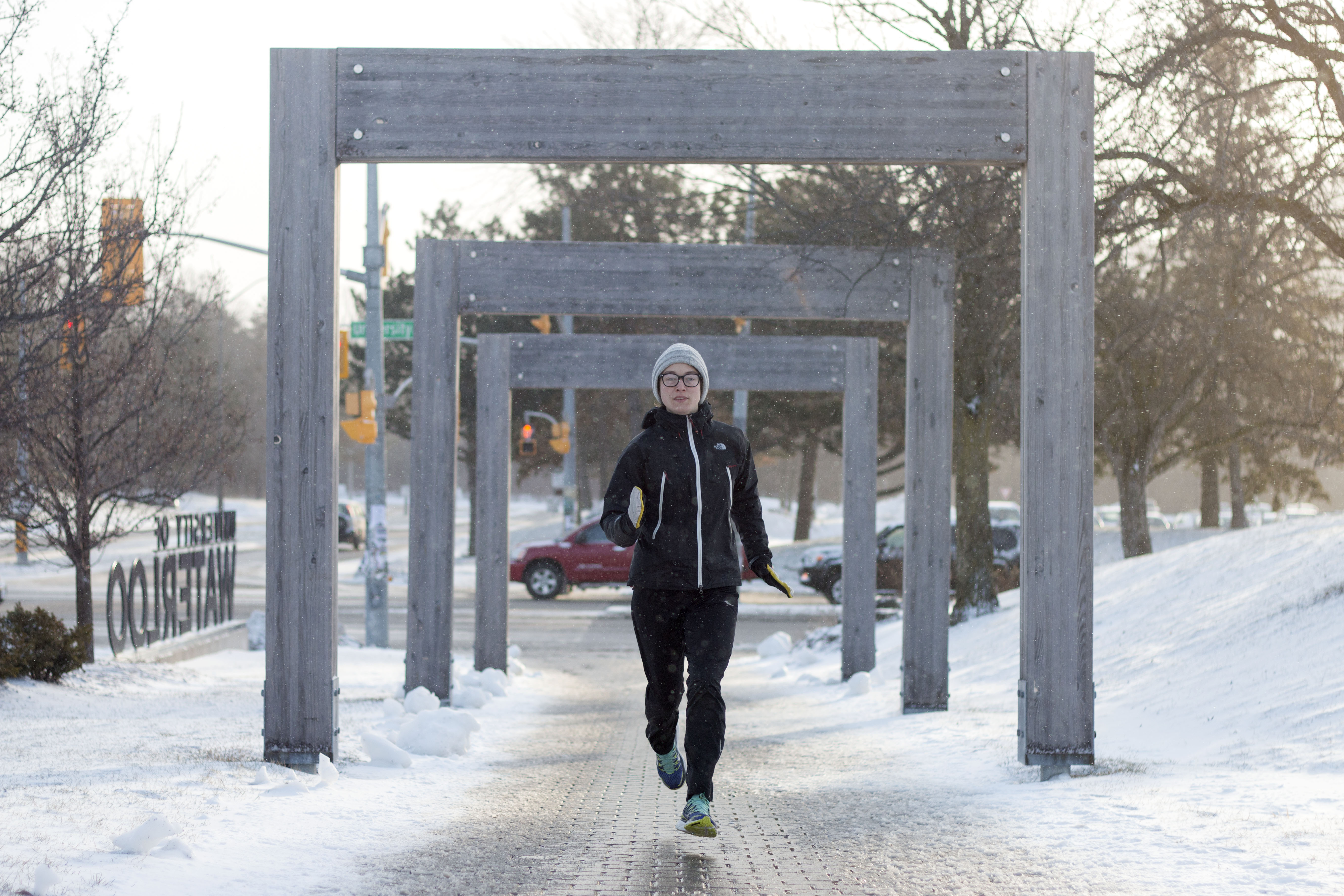 There are currently upwards of 300,000 barrels of oil per day flowing from Sarnia to Montreal through a 40-year-old pipeline called Line 9. Rachel Thevenard, 22-year old student at the University of Waterloo, just finished running this route to protest Enbridge’s failure to consult First Nations for developments affecting their land.

Enbridge, an energy delivery company based in Calgary, will reverse its flow and was approved to transport crude oil and bitumen.

Hearing about the pipeline five years ago, Thevenard thought the project was “ridiculous” as the pipeline was responsible for 35 oil spills in 99 villages that went unreported for years. Thevenard said the inspiration behind the run centred on the idea of what is deemed “natural.”

Thevenard began her run on December 4 in Sarnia, stopped on December 13 in Toronto and finished in Montreal on January 6.

With almost no experience in running marathons, Thevenard trained by running five kilometres then would train up to 15 kilometres and eventually was able to complete 25 to 50 kilometres a day.

Thevenard experienced some physical challenges while on the run such as blisters and sore muscles. These called for also warranted mental strength, but she concluded that the experience was rewarding.

Chippewas, First Nations of Sarnia, supported Thevenard during her run and offered a support vehicle and places to stay on the route. The run was in part also a fundraiser.

Other First Nations also offered support and were welcoming as she entered their territories with permission.

“I would really like to see that more in the future, occupiers actually asking permission to be here,” she said.

While this pipeline has had a notorious impact on the environment, the greater issue at hand, according to Thevenard, is the development of the pipeline without consent from nearby Aboriginal Peoples.

Other issues and extraction projects are also in the process, which she calls “environmental racism” as hazardous projects have the potential to harm groups of people to access rare natural resources.

“It’s just environmental racism. It’s horrible to see, and awful to witness. It’s very scary to see that there could be a spill or an explosion at any time and Enbridge may not tell anybody to evacuate.”

While the environmental damages caused by the pipeline have been exposed, Thevenard believes there aren’t appropriate safety measures in place that work well with municipalities.

Enbridge promises to be diligent and responsible, but Thevenard believes the company to be “untrustworthy” based on past experiences. For example, she cited the 2010 oil spill in Kalamazoo, in which the company reportedly took 18 hours to close the valve.

These incidences can be avoided if the company detects a spill, said Thevenard, and if they are able to shut off a valve in a timely manner.

In response to the run, Enbridge released a statement stating they respect individuals who express their views peacefully, but feel that collaboration is necessary to push meaningful change. Thevenard said meaningful discussion was not held if First Nations did not give any consent for development.

“Why hasn’t Enbridge meaningfully discussed with First Nations? There is no consent from First Nations,” she said.

She adds that the ultimate goal is to raise enough awareness to stop Line 9.

“This is not Europeans’ land. This is stolen land. But we have to give it back.”

Knowledge about the treaties is necessary in order to fully understand the issue at hand. Thevenard said treaties are still valid and must be respected.

Map courtesy of National Energy Board and CTV News