Reflecting on the meaning of Pride 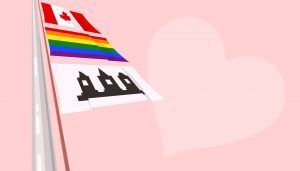 For many of us, it’s the most wonderful time of the year. Warm weather, the sun, at least some free time and the rainbow flag is flying overhead.

June is Pride Month and festivals are picking up to celebrate LGBTQ+ folks in our communities. Queer history is being explored and showcased in many ways for those who are eager to learn.

Tri-Pride, the Pride festival in Kitchener, Waterloo and Cambridge, came to a close on June 4, but the festivities in Toronto and other major cities are still ramping up and will reach climax at the end of the month. Even some smaller cities won’t have their celebrations until late July, while others will start their marches in August.

It’s not too late if you want to be in on Pride but missed it in the Waterloo Region, and it’s never too late to be proud of who you are and who you love.

In the last few years, one thread I’ve seen through the discussion of the festivals concerns why we still have them.

Pride parades, historically, were marches for representation and rights. Black, trans women led the first march – composed of protestors commemorating the Stonewall riots – to demand LGBTQ+ rights in the United States. The event also served as the spark for international gay liberation.

Now, Pride is a corporate event, where the Justin Trudeau-types wave to the crowd and banks hand out business cards.

Compared to the 1970’s, we’re a lot more tame, but at the same time, we also have a lot more explicit rights.

However, equality and equity don’t end with marriage rights. Until every person is free and comfortable loving who they love – and comfortable being exactly who their brain tells them they are – Pride will always be important.

Even if we’re no longer marching against police raids or a justice system that doesn’t serve the community, we’re still marching to end discrimination and to demand proper representation.

That being said, human rights groups such as Black Lives Matter still use Pride as a platform for their voices.

No matter if we agree with the politics of this or not, it’s undeniable that their message has been heard, as the police are no longer marching in some cities, and the group has shown the systematic inequality that they face with their own voices.

And that’s exactly what Pride is about. The more visible we are, the more likely we are to be heard and, in turn, accepted.

There should be no stigma about loving whoever we want to love and being who we are, and Pride is about engaging with that goal – loudly, proudly and for all to hear and see.

We may be able to get married now in Canada, but there are people who still view being gay as a disease that can be cured with the right amount of persuasion.

Couples still get harassed on the streets and “coming out of the closet” is still one of the scariest things that many young people must endure.

Celebrating Pride gives a community its own voice. Even if we’re no longer yelling and picketing, we’re still shouting our support and our existence.

Pride is a safe place for LGBTQ+ people to exist and be proud of who they are, despite the systematic inequality faced every day – passing privilege or not.

Modern Pride is about visibility and the lack of change in how people are viewed.

In the same way that we can’t change our sexualities or genders, we won’t change the tradition of the fight for our existence in society and the acceptance of our love.