My Roommates are driving me crazy 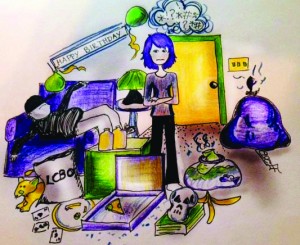 I lucked out with my roommates.

I had the opportunity to live with four fabulous individuals who were not only my best friends, but my family. We cared for each other, spent the most time with each other and had a strong bond. However with all relationships there’s one thing that is bound to come up: conflict. It happens.

My roommates had a habit of making me frustrated and irritated despite them being my best friends. Oh yeah, their antics pissed me off and I’m sure mine were just as annoying, but at the end of the day, when the stupidity of the issue got resolved, we were all smiles, until the next thing came up.

Living with your pals is a ton of fun but much different from living at home. Your privacy and space is invaded, people have a different tolerance of rules and regulations. Here are the hilarious cons of living with others.

Just when you thought it was okay to walk around in your towel, you see that random dude chilling on your couch. Nothing to me was more uncomfortable than waking up in the morning, in my P.J.s and discovering three different pairs of male shoes near my doorway. Hey, if they wanted to bring someone home, they could. As long as the guest is respectful, you will just have to deal with it.

2) Their view of cleanliness are completely different than yours.

They could have mould on their dishes and stack them up for weeks in the sink before they thought it was an issue. They let garbage bags overflow, and wonder why there are bugs in the house. Hair and scum all over the bathroom? Who cares? They don’t! If the cleaning system is a free for all, it is guaranteed that the ones who are neater will pick up more of the slack. It is almost impossible to evenly assign cleaning chores to your roommates. Chances are, they won’t think it’s such an issue if the kitchen is a disaster but they will think you’re crazy for getting mad at them.

Animals in a student house, especially an apartment, are cute for a couple of hours. That’s it. But when your roommate wants to treat the living area like a zoo and bring an animal into the house, things could get tricky.

Not only must you deal with the smell, noise and potential hair (not to mention allergies), but at the same time, if your roommate has class all day and Fluffy needs to go take a poop outside, guess who’s responsible for this creature? Pets are fun until you have to actually take care of them when you never agreed to own one in the first place.

Your noise level will clash with someone else’s noise level. We all have our different schedules. When you want to party and dance in your living room, your roommate will have the most important essay of their life due that week. When you’re stressing out over that 40 per cent exam, your roommates will be competing in beer pong tournaments. Even watching TV at night. Conan killed me during the weeknights. Of course when you ask politely to keep the noise level down, you always appear to be the one being “unreasonable.”

Whether you like it or not, whenever there is an issue within the house and all the roommates know, people are going to pick sides. Expect to be the outcast in a few of them, and enjoy the ones where you have everyone supporting you. Enjoy it as long as you can! It’s a 50/50 chance, react wisely!

“Salmon nights” were my least favourite nights. Plug your nose and invest in a fan.

Is there a ghost on my couch? Why has the TV been on for the past hour and no one is watching it. Some students are lucky and don’t have to worry about money, others are dealing with OSAP and balancing an extra job.

Conserving energy is always a smart idea so give the roommate some slack when he/she gets annoyed that you leave all the lights and the TV on and plug in every electronic device when you’re not using them. They will have the pay for it.

‘Tis the Season to Consume

Some benefits of journaling