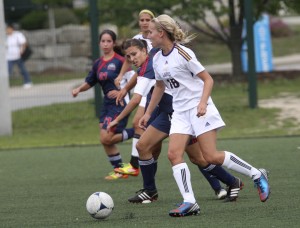 Winning their third consecutive game, the Wilfrid Laurier Golden Hawks women’s soccer team appears to be picking up where they left off.

Sunday’s match against the University of Waterloo Warriors resulted in a 2-0 victory, bringing the team to a record of 3-0-1.

Right now, the purple and gold stand first in their Ontario University Athletics (OUA) west division and are ranked seventh in the country.

However, opinions about Sunday’s game did not correlate to the seemingly optimistic ending.

“I don’t think we played very well,” reflected Laurier head coach Barry McLean. “We’ve got to get some consistency and we’ve gotta get less rattled when things aren’t going our way.”

Although Laurier appeared to be the more talented of the two teams, the squad seemed inconsistent and had difficulty with their execution.

A game that could have easily been a blowout just didn’t seem to happen. The Hawks put 13 shots up against Waterloo netminder Lesia Bandura, while Laurier keeper Margaret Charmichael stopped the lone shot she faced.

“We knew that they were going to put up a strong fight, and they always come out pushing hard.

After an intense first half, Jacqueline Lence scored the first goal in the forty-third minute, giving the Hawks a 1-0 lead.

Laurier outshot the Warriors 6-1 before the half.

It was then Julie Maheu who would later bring the Hawks to their final 2-0 score.

“I really think we pulled through in the second half,” said Brown. “We got the two goals we needed and I think we solidified our standing in the league.”

Maheu, who had had a total of shots in the game, was also named the Laurier Bookstore’s female athlete of the week.

Another win keeps the purple and gold’s momentum high as they continue on in their season after defeated they Brock Badgers 7-0 Wednesday night on Alumni Field.

The win against Brock is the largest margin the women have won by in recent history, where five different Hawks found the back of the net, including rookies Shelby Fallis and Abbey Zamec

Next, Laurier will travel to London to play the Western Mustangs this Saturday and attempt to keep their streak going.