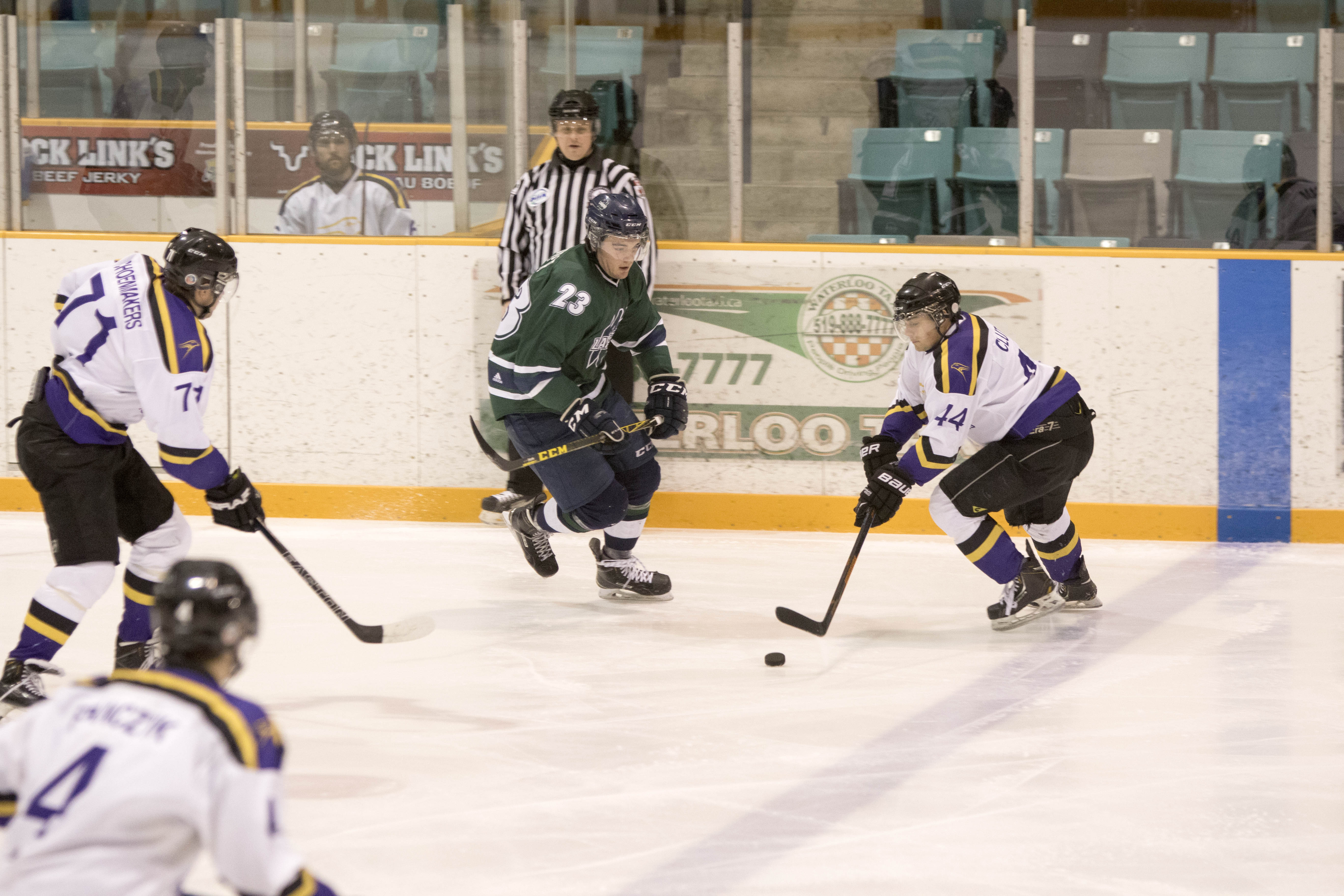 The Wilfrid Laurier Golden Hawks men’s hockey team capped off a double header weekend with a 1-1 record after a 3-4 loss to the Laurentian Voyageurs and a 3-1 win over the Nipissing Lakers. Both games were competitive and came down to essential pushes —Laurier learned from January 16’s previous shortcomings against Laurentian to manufacture a win the next night. This brought the team’s overall regular season record to 9-11.

A 10 minute four-goal bombardment by Laurentian resulted in a goaltenders switch. Colin Furlong allowed an uncharacteristic four goals and was replaced by Vinny Merante, who made 17 saves in Furlong’s relief. Merante started against Nipissing on January 17 and made 36 saves.

Regardless of Furlong’s performance, the game got out of hand and something needed to be changed for any hope of resurgence. After the game against Nipissing, head coach Greg Puhalski said he had planned on the netminders splitting the time over the weekend, but felt that change was needed by bringing in Merante.

“[We] felt we needed a little bit of a spark. We were a little flat. It’s not that [Furlong] played poor. Just the type of game it was,” Puhalski explained.

“Vinny came in and I thought he played well yesterday and he had a good game today.”

Puhalski said Merante has had his chances to be the Hawks’ starter but yielded mixed results — if Merante plays well all the time, it will give him a chance to play more. Hawk captain Greg Cerilli made his presence felt throughout both games, scoring two goals against the Voyageurs and adding another against the Lakers.  Cerilli stressed the importance of resilience late in the game.

“Yesterday [against Laurentian] was a tough loss for us, but we knew we had to battle 60 minutes,” he said. ”It was the second period that killed us.”

“I thought today we played [the] better part of 60 minutes and we got the result we were looking for.”

Cerilli was happy Laurier players were blocking shots, an aspect that was incorporated into the matchup against Nipissing. Cerilli said the Hawks’ defensive zone was a little better and they capitalized on a couple of chances.

A blocked shot even turned into the game-winning goal.

“We had more blocked shots from our forwards. Our D is usually pretty good at blocking shots but [Mitch] Wright blocked a shot that led to a break away, [we] had it in their zone and we took a 2-1 lead off which started from a blocked shot.”

The Hawks go on the road against the Windsor Lancers on January 20. Cerilli refocused himself for the task at hand as the Hawks chase Windsor in the standings.

Currently, the Lancers are fifth in the Ontario University Athletics West conference while Laurier sits in seventh.

“Windsor’s a tough place to play. We beat them in preseason, but Windsor’s a team that’s ahead of us, and were chasing them down,” he said.