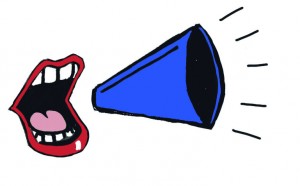 …clichés.
Honestly, we’ve become so lazy when we put words together that nearly everything we say is some type of phrase that has been overused to its deathbed.
Daily, I hear hockey players make generic comments about how they’re putting “110 per cent” into their game or professors use lame phrases to make it through already boring lectures.
If you’re trying to keep my attention, don’t continue to use the same quote or phrase that every other damn person has made a million times before you. Especially athletes.
This is why I love the Elizabethan era so much. Their language was authentic and genuine and not filled with stupid lines like falling head over heels, the calm before the storm and in the nick of time.
I’m all for figurative expressions, but fuck, get original. I’m not saying go back to saying incredibly profound lines but, you know, make more of an effort than leaning on someone else’s words.
It’s not hard to go back to the routes of language and find something genuine to say about someone or something that isn’t taken over by a stupid, overused, empty line.
No wonder people suck. At the end of the day, go fuck yourself.