Welcome to Greek Life at Laurier

Let’s walk away from the beer-guzzling mayhem of Animal House and the jarring sexual nervousness of American Pie. Don’t get me wrong. Those classics are as lovable as they are laughable, inspiring following generations long after their release dates, enlightening paths of raging alcoholism and explicit nudity amongst a catapult of unforgettable stories. But what’s Greek Life really about? Switch off your douche-bag-detectors and gather around, Golden Hawks — I’m about to expose one of the best decisions I’ve made in my university career.

When entering first-year, I had no intention of joining a frat. I didn’t know much about them and was mostly unaware of their existence in Canada. Also, getting hammered and meeting friends seemed like an inevitability that didn’t need to be paid for in advance.

Well, it wasn’t long until I received my ‘bid’ — an invitation into a fraternity recruitment program. Pledging was a foreign concept and sounded awfully similar to some ceremonial cult ritual to praise the Devil. I’ve seen Old School — if these guys were planning on bringing a rope and brick anywhere near me, I’d take a hard pass and run far, far away.

But I was in for a pleasant surprise.

Pledging and later becoming a brother busted open countless doors to enriching experiences, motivating me to be a better student, inspiring community leadership and forging some incredible bonds throughout the student body—no bricks and rope required.

Grab some tissues folks. I’m about to get emotional.

The best problem a man could encounter is having too many ‘best men’ to choose from. In my fraternity, I met guys that will stay with me for the rest of my life, guys I know will be roasting my ass with a wine glass in hand as I sit next to my newly-wed-wife and lower my head in exasperating embarrassment. These are the guys that’ll be there for the lows and highs, who I’ll travel with, talk about our kids with and eventually sit around arguing about retirement plans when we’re wrinkled old farts with a lifetime of stories up our sleeves. They’ll be my brothers long after undergrad.

But what separates fraternity brothers and sorority sisters from any other group of friends you’ll bond with? What difference does Greek Life make at Wilfrid Laurier University and beyond? Here’s what many other representatives have to say about it.

“My icebreaker was actually in a frat and he encouraged me to check out all the other fraternities,” said Pi Kappa Alpha’s chapter president, Xavier Prosper, going into his fourth-year at Laurier. 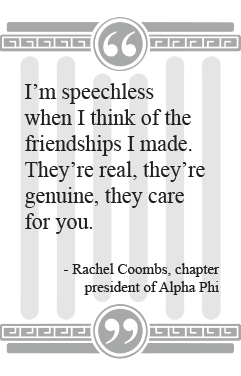 “They started talking to me about the more professional side of things. How they give back to the community and help in terms of personal development.”

Now Prosper is currently an icebreaker himself, hoping to inspire the same impactful perspective within younger students.

“Part of your academic success will be based on being properly integrated in different social groups. I want to show where they can participate in the school. I want to help them find somewhere they can belong and allow them to give back to the community.”

Beyond the networking, philanthropy and community involvement, building bonds is the most important aspect of joining a Greek Life organization.

“I met my best friend in my pledge class. We’ve been very close since,” Prosper said. “A lot of people always assume that we came from high school together, but we met through the frat and bonded right away.”

Similarly, I met one of my own best friends through pledging my fraternity. Thanks to a memorable assortment of fraternal shenanigans, we’ve become inseparable. People always assume we’ve known each other for years prior—I guess that’s just part of the brotherly charm.

Prosper later mentioned that he and his fraternity brothers actively volunteer with the National Service Dogs of Canada — just one of many ways they give back to the community.

“I always thought that it was the typical American film where all the girls had to look perfect all the time and there was hazing and girls were catty,” said Rachel Coombs, chapter president of Alpha Phi, going into her fourth-year at Laurier.

“Once I did come to Laurier I found out that Greek Life is very different from that. Everyone in Greek Life is very passionate about community service and philanthropy. It was just a group of girls that wanted to do good and have fun together.”

Coombs went on to further explain how her sisterhood also guided her towards campus involvement and accepting new experiences with open arms.

“I’m speechless when I think of the friendships I made. They’re real, they’re genuine, they care for you. A couple of these best friends I know I’ll live with in the future, they’ll be my future bridesmaids.”

Now, I’m not trying to bombard you with a high-voltage blast of Greek propaganda that promises you’ll find your bridesmaids and best men. I’m just saying, a lot of us feel similar about the relationships we’ve built.

I asked her what she’d say to an incoming first-year, on the fence about going Greek.

“Try it out. It doesn’t hurt to go to recruitment events and see what that organization is truly about. Maybe one of their values will click with you. Or you’ll meet someone you want to get to know more. I’d say just go for it.”

“Within Greek Life, obviously we have philanthropy work and getting involved in charities around the community and beyond, but we also let each other know about opportunities,” said Sarah Tyler, chapter president of Alpha Omega.

Tyler later explained to me that Alpha Omega’s main philanthropy initiative is Anselma House, a women and children’s shelter in Kitchener, supporting survivors of domestic violence and abuse. One of the events they hold to raise funds is their Guilty Pleasures All-You-Can-Eat Bake Sale each semester.

“If Greek Life didn’t exist, and if people in Greek Life weren’t as passionate as they are, the community would suffer,” said Micahel Pinchin, chapter president of Zeta Psi.

“There could be other clubs that try and accomplish the same goals, but no one could do it as good as Greek Life. That’s because of the depth behind our intentions. There’s certain ideals that we’re sworn to.”

He mentioned that all of us are so much more than school clubs. We’re brothers and sisters sworn to matching ideals of leadership, with some organizations carrying international histories going back over a hundred years.

This massive network, with numerous chapters expanding throughout the globe, also leads to countless connections in professional fields.

Despite mainstream misconceptions of opposing frats and sororities being innately sworn to hateful rivalry, the massive collaboration between our four fraternities and two sororities recognized on campus allows the ultimate impact to be made. Collectively we make the biggest difference.

“You just want to see everyone succeed and do well, and we want to help our brothers,” said chapter president of Sigma Chi and fourth-year business student, Louis Pfeifer.

“Through that you get these incredible bonds. A lot of normal campus clubs don’t really have that closeness and strive to help each other succeed. Not even just success, but being happy. If you’re depressed, we’re there for you.”

“We really encourage guys to be leaders, not just in the fraternity but on campus and in the community. That’s something that we try to foster.” 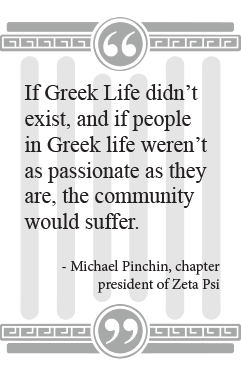 One of Sigma Chi’s yearly initiatives is a Cancer walk to raise money towards the Hudson Cancer Foundation.

Each member of each organization pays ‘dues’ — a pool of money going towards events and experiences. Much like a bunch of buddies pooling money together for a big road trip, a fraternity is no different. Without the change for gas, the tires just can’t hit the road.

My brothers and I at Alpha Epsilon Pi hold a yearly “Man Service Auction” to raise money for Grand River Hospital. Services entail carrying your books, washing your car, cooking you a meal or taking you out on a date . Yes, some of us are single.

These boys are my intramural team, my workout buddies, my study partners, my housemates and my hooligan friends hoping to get the best out of our undergrad experience.

I’m not denying that the stereotypes of degenerate fraternity boys and snobby sorority girls aren’t real in some parts of North America — I follow Total Frat Move in bewildered amazement. But I know they’re not here at Laurier.

And you don’t need to rid your wardrobe of anything that isn’t polo shirts and tacky pants, either.

The diversity of each organization is open to students from all walks of life. No matter where you come from, where you stand financially, your ethnicity or sexual orientation, Greek Life will gladly open our arms in acceptance. Regardless of our letters, being fellow Golden Hawks is the fuel to our unity.

Do we party? Absolutely. But in contrast to organizations outside of Waterloo that have been penalized for excessive alcoholism or hazing, it’s important to realize that times have changed. A group of students coming together to make a difference will always be more powerful than racking in keg-stand scores and being victorious in a rampant battle of flip cup. But I do hold some records in that regard, too.

When young minds, thirsty for change, come together through diversity, community involvement and everlasting friendships, the results are undeniably beneficial.

Whether or not Greek Life is right for you, getting involved on campus while meeting people who will unconditionally stay by your side will make your time at Laurier an experience to remember.

The hidden struggles of women with ADHD: how overlooked symptoms can lead to problems later in life

What’s on the menu? Local restaurant deals in Kitchener-Waterloo

Supporting independent cinemas during the pandemic: there’s nothing like the in-person, movie-viewing experience