The impact of extreme student activism

With protests at several schools in the United States, is extreme activism a concern at Laurier?

“At the table rather than banging at the door.”

With extreme student activism now a spotlight in the media, such as the protests happening at the University of Missouri and Yale University, it is difficult to not find debates about hot topic issues happening on college and university campuses across the United States and Canada.

Protests from students and staff at the University of Missouri called for their president, Timothy Wolfe, to resign after a lack of concern for racial discriminations happening on campus.

At Yale, students campaigned to have professor Erika Christakis and her husband removed from campus after Christakis wrote an email about Halloween costumes.

A lot of people are angry over the statue project, but it just means students aren’t afraid to stand up for what they believe in.

Laurier students are not unfamiliar with the idea of student activism on campus. Since the summer, students, staff and faculty have been arguing over the state of the prime minister statue project.

An activist group called ‘Students Against the Statue Project’ is committed to abolishing the project for “not accurately reflecting the diversity of the Laurier community.”

“Personally, I don’t believe students are too extreme here,” said Lindsay Griffiths, a fourth-year biology student. “A lot of people are angry over the statues project, but it just means students aren’t afraid to speak up for what they believe in.”

Although the statue project is not considered as extreme as the protests happening in Missouri or Yale, Matthews believes the problem stems from when students do not know where to address their issues or concerns.

“The problem [arises] when students don’t know who to go to and then it’s built and built and built to a point where they feel they need to advocate so heavily that it becomes whether it’s a protest or something of that sort,” said Matthews.

Not knowing where to turn is one issue. Another can be when students forget to take advantage of opportunities to talk to a representative of Laurier’s administration team or the Students’ Union.

Phil Champagne, Students’ Union executive director and COO, said the biggest complaint is almost always rooted in communication from both sides of administration and students.

“If there is any frustration from the administration side, and we all know that there’s definitely frustration on the students side, it’s usually around not necessarily the lack of communication but poor networking of that communication,” Champagne explained.

In March, Laurier announced the cut of 22 staff positions. Students and faculty alike were enraged. Students performed a “sit in” at the Students’ Union office later that day. Champagne and then president-elect Matthews were in attendance when members of the Students’ Union tried to compromise with students in a fair way to communicate their concerns.

From his experience then, Champagne believes students get caught up in the bureaucracy of the university. The Students’ Union tries to answer issues students may have about the university, particularly concerning the statue project.

“[The Students’ Union] tries to mitigate those communication risks, and I think that with [statues project] in particular, the frustrations mount and mount and mount because of the nature of how it got pushed through.” 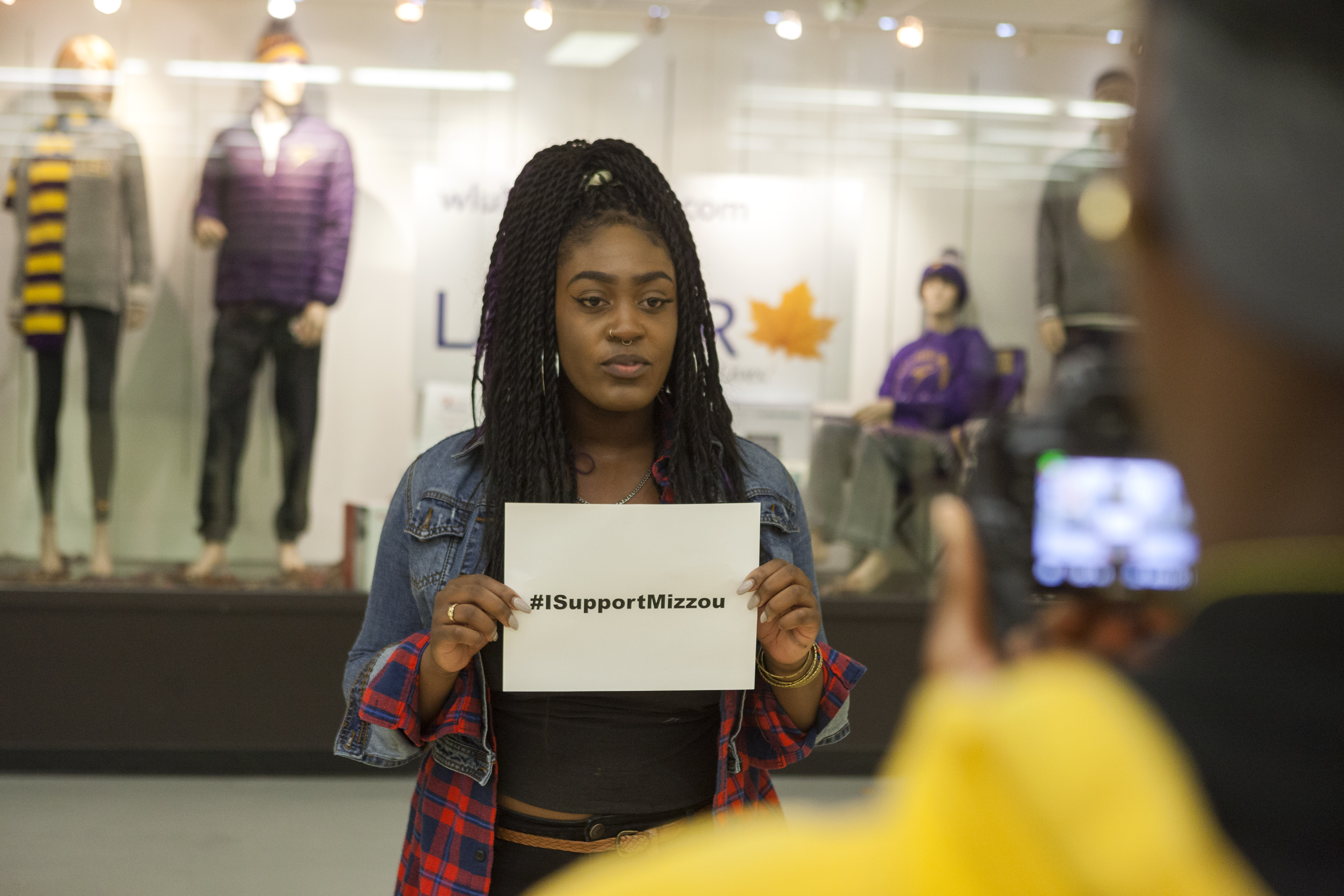 In both the United States and Canada, student activists have protested over issues on their school campuses. | Photo by Jessica Dik

As a student activist, Matthews holds the belief that with activism comes the misinformation that follows. Students don’t know who to talk to, what is going on and what they’re fighting for, which can be “extremely frustrating” on their end.

“That same misinformation can also lead you into head space of not necessarily knowing what to actually believe,” echoed Champagne.

Along with the problem of misinformation, Champagne agreed it’s hard for individuals to view an issue from a different perspective or to acknowledge it’s there.

This “extreme” activism that includes large demonstrations, public outreach and protests also have the benefit of being noticed by a large group of people.

Frustration is usually around not necessarily the lack of communication but poor networking of that communication.

“That activism looks better because it’s loud and it’s attractive and it may gardener more attention, but I think you get a lot more done when you’re actually in a conversation with someone,” Matthews said.

“[The group] initiated the Walk for Mental Health and other events like scrawl on the wall that we’ve seen in the last two years that have made for a much more robust discourse about mental health that wouldn’t have existed without their involvement,” she explained.

Along with the Students’ Union, the student affairs office often recommends students to broaden their horizons when dealing with an issue or conflict. McMurray said students are often asked to think about “widening the walls and expanding their horizons” and “opening their minds to different views.”

“Many do in that process and begin to really shape what they really believe in,” said McMurray.

Although some students may feel like they have nothing to contribute on topics overrun with student activists, McMurray believes universities are built for the freedom of expression.

“Universities in society I think are built for that opportunity hopefully students will be encouraged to advocate for things that they really feel passionate about.”

Although extreme student activism may occur, whether that’s in the United States or on Laurier’s own campus, McMurray and Holland Brown believe students have a role in shaping the outcome of Laurier’s future.

“There’s a sincere interest in inviting students, faculty and staff to be part of the conversation. I really believe that there’s an interest in co-creating what our community looks like and so we all can have a role to play in that,” said Holland Brown.