Superheroes, comics and your childhood self 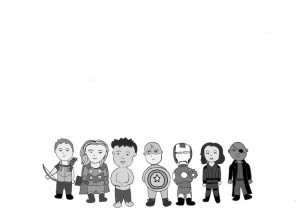 Earlier this month, Rick Groen’s review of The Avengers for The Globe and Mail gave the film two separate ratings: three stars from his “Inner Kid”, and one star from his “Outer Crank”.

Apart from bristling at this unnecessarily harsh verdict on what was virtually universally declared the best superhero film, and one of the most intelligent summer blockbusters in years, I found myself deliberating the distinction between evaluating a film critically and enjoying it with the unabashed emotional response of an “inner child”.

It’s a term generally used with a blend of endearment and condescension — it’s okay to be in touch with your inner child, but not to let him or her run rampant. This attitude feeds into the general presence of superhero films.

Superhero films have always been recognized as tapping into nostalgia, as reading comic books or watching cartoons were activities generally affiliated with childhood — things that people inevitably grow out of.

As such, early superhero films were rare, and, apart from certain exceptions, generally quite terrible (check out the laughable 1990 Captain America film starring J.D. Salinger’s son for comparison). This suggested the industry was allowing a tiny bit of “inner child” to bleed through, but with a dismissive attitude reflecting the culture’s scorn.

But, as Watchmen vocalized (circa Bob Dylan), the times, they were a-changin’. Over the course of the last decade, comic book superhero films have become abundantly more popular amidst mainstream Hollywood releases. Case in point: this summer.

The headlining Hollywood releases this summer, other than Ridley Scott’s Prometheus, are all comic book films: The Avengers, The Amazing Spider-Man, and the much anticipated conclusion of Christopher Nolan’s Batman trilogy, The Dark Knight Rises.

A genre that was formerly dismissed as cheap pulp for a niche audience of super-nerds is now taking over an industry designed for mass audiences, and making a killing doing it.

So what’s the deal? Why did superhero films become all the rage?

I previously mentioned people being conditioned to think of an “inner child” as a fleeting departure from their ‘real’, adult self. I don’t think this is the case at all, and I think the ever-growing popularity and sophistication of superhero films is a testament to this.

Superhero films do tap into emotional reactions that, for many, recall childhood, but such enjoyment is by no means restricted to it.

It’s worth noting that ancillary interests, like comic book or figurine collecting, have also experienced a huge upswing in popularity as such practices have become deemed increasingly more “acceptable”.

This year, on May 5 “Free Comic Book Day”(an annual promotion and sale), the owners of both Waterloo’s Carry On Comics and Kitchener’s Lookin’ For Heroes each remarked that neither could recall their stores ever being so busy as that day.

The rising popularity of graphic fiction equally speaks to the fact that comic books can have an appeal beyond cheap, disposable entertainment and actually have some real substance and artistry to them — something that the general public appears to be tapping into and wanting more.

Many think that the recent popularity of comics is because of the increased presence of superheroes in Hollywood. I’d argue that it all taps into an overall larger issue: it is becoming increasingly more societally acceptable to allow the co-existence of people with their “the inner child”.

Because of this, love of comics or superheroes is no longer something to be ashamed of, or indulged in secret, as many comics fans experienced growing up, for fear of mockery or derision — I speak, of course, not at all from experience. Ahem.

This paradigm shift has been explained by reasons as varied as the internet allowing for more fan solidarity, more nostalgic (or even ironic) cultural trends encouraging unconventional consumption, or that, in a disillusioned post-9/11 age, the hero myth is more appealing than ever.
Perhaps people are now just more okay with having some fun.

Or, as recent scholarship claims, superheroes are a form of a modern mythology: shared, larger-than-life texts of fantastic individuals doing things that most people would never be able to do, but would unanimously aspire to.

Pretty fitting that one of the Avengers, Thor, is actually a God, isn’t it?

And these unbelievable individuals are using these incredible powers for the sake of protecting normal people!

What could be more simultaneously cathartic and feel-good than that?

So, let the massive popularity of The Avengers signal the death of the “inner child” being a regimented, scornful thing.

Let there be no more furtive reading comics under bed covers at night, for fear of jeering siblings. The general public appears to be finally allowing themselves to accept “childish things” as legitimate, whether as simply fun or as yielding greater complexity and artistry. And this can only be a good thing.
Excelsior.