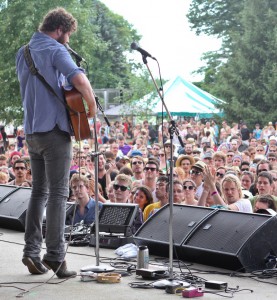 Music and film lovers should not pass up this opportunity to attend NXNE which wil be happening in downtown Toronto. Scattered all over Toronto at numerous venues, 650 bands and 40 films are scheduled to be showcased during the week. The biggest headliner of the week is The Flaming Lips who will perform on Saturday June 16 at Yonge and Dundas Square. But don’t let the unfamiliar band names shy you away from attending. If you are around town, open to new music and need to update your iPod playlist, NXNE may just be your answer. Check out their website for a full schedule and details on how to gain entry to specific venues. Follow @DDmytraszko (Staff writer Danielle Dmytraszko and @carly_basch on Twitter as they will be covering some (definitely not all) bands that will be performing.

Another opportunity to listen to some of Canada’s hardest rockers, Toronto rock radio station 102.1 The Edge puts together this festival to bring on the spirit of rock and roll. Located at Downsview Park on Saturday July 14th, audience members have access to two different stages where numerous bands will perform. Performers we are most excited about: DFA 1979, Silversun Pickups, Young the Giant, Said the Whale and The Darcys. Tickets available to purchase via Ticketmaster ($40-$60).

A three-day music festival featuring local and world artists as well as various craft vendors and local food options. It is located at the Guelph Lake conservation area, minutes outside the city of Guelph. While weekend passes are already sold out, tickets for Friday, Saturday and Sunday are still available. There is plenty of parking and camping options at the site as well as a shuttle running every twenty minutes from downtown Guelph. Great food, great music and great people make this festival one of Canada’s best-kept secrets. Be sure to check out performances by Arkells, Kathleen Edwards, Great Lake Swimmers, Joel Plaskett Emergency, Walk Off The Earth, and Zeus. (Matthew Grant)

Osheaga makes a comeback with a headline that is sure to be the most anticipated music festivals of the summer. During the first weekend of August, Osheaga will take place at Jean Drapeau Park (just a ferry ride away from Old Montreal) and will feature some of the hottest music artists of the year: Florence and the Machine, The Black Keys, Feist, The Shins, MGMT, Bloc Party and The Weeknd. However if that is not enough, music fans will also anticipate performances by The Walkmen, The Black Lips, Zola Jesus and The Dum Dum Girls. Two-day weekend passes and single day tickets are still available. Follow @carly_basch on Twitter as she will be providing reviews and updates of the festival throughout the weekend.

The Best of the Rest: