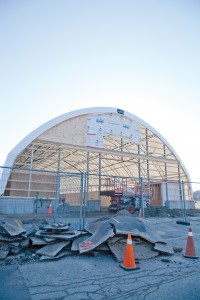 St. Jacobs Farmers’ Market, once the victim of a devastating fire, is on its way toward recovery.

The market is currently undergoing the installation of a temporary structure that will accommodate up to 60 of its vendors who were displaced due to a fire in September. The building now consists of a steel frame with a fabric roof, pulled taught over the structure.

Cliff Janssens of Bruce Schmidt Construction, the company hired to install the temporary structure, was pleased with the progress of the building.

“It actually went really well,” Janssens said. “It really went smoothly. To install the covers it takes good, calm weather so it’s been a little bit challenging that way but the covers are over now and installed.”

The completed construction of the building is expected for the beginning of December.
Market manager, Liz Thomas explained that the new building will house nearly all of the vendors who were displaced by the fire.

“I do believe they are all coming back,” she said. “With the exception of the fast food people that needed hoods, you can’t put exhaust hoods in a building with a cloth roof, so we’ll accommodate them elsewhere.”

Jenny Shantz, media spokesperson for St. Jacob’s Farmers’ Market explained that the building can be used as more than simply a temporary structure.
“It has potential to last a really long time,” Shantz said. “It could last as long as twenty years, so it’s more than just a tent. We’re going to probably continue to use it for some purpose even after we build the permanent building.”

Thomas noted that the plans for the permanent structure are still in the design stage. According to Mercedes Corporation, the owners of the market have not yet decided on a construction company to work on the permanent structure.
“The goal is to get that temporary structure open for the first week in December, but anything can go wrong, like delays with various aspects of construction,” Thomas said.

The Kitchener and Waterloo Community Foundation have established a fund for the vendors who suffered financial losses as a result of the fire in September.

Rosemary Smith, chief executive officer of the Kitchener and Waterloo Community Foundation (KWCF), explained that the fund aims to relieve the financial burden of uninsured vendors in three areas of loss.

“What we have learned so far,” Smith said, “is that one type of loss is equipment and inventory, a second one would be employee salaries and the third area would be the whole area of business interruption.”

The KWCF has approached the Township of Woolwich to partner with them to receive grants dispersed from the fund. Smith explained that Woolwich would work with the foundation to ensure that the donors affected would receive financial aid and that it would be spent in the manner intended.

“So we’re hoping to raise funds between now and the end of the year and at that point in time we will be distributing to those vendors, according to their applications. Vendors will receive money to cover losses in each of the aforementioned areas,” Smith added.

Thomas also added that the cause of the fire is under an ongoing investigation with the Fire Marshall and could not give any updates regarding the progress of the investigation.