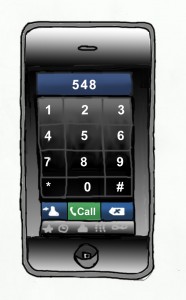 A new area code, 548, will be introduced into southwestern Ontario come June 2015. Waterloo Region will be amongst those included in the new numbering block.

“We have a protected life for area codes of around eight to ten years,” said Guillaume Castonguay a media relations personnel of the Canadian Radio-television Telecommunications Commission (CRTC).

“It’s definitely because of the population [growth] and also because of increasing demands on numbers, because now people often have two or three phone numbers, one at home and one or two mobiles; and there is also machines now that communicate between each other using phone numbers,” said Castonguay.

What remains ambiguous though are if either of these factors had a disproportionate effect on the need for the new area code.

“We look at the rate at which the numbers deplete and once we identify an area that will soon be depleted we introduce a new one. We don’t necessarily look at all of the reasons why these numbers are depleting,” stated Castonguay.

Another important fact is that there is also increasing competition between the phone companies all around Canada.

Since the announcement of the new 548 area code, some concerns havearisen about whether changes will affect those already subscribed to 519 or 226 phone numbers.

Castonguay, however, assures that the new area code will not be affected these individuals.

“This region is already using ten digit dialing because there are already two overlapping area codes with 226 and 519” he said. “Every subscriber will remain in the same number, it will only be new numbers after June 4th 2015 that can be assigned numbers in the 548 area code.”

The new area code then indicates a number of factors: population growth, proliferation of mobile devices and increased corporate competition.

All three arguably point towards a growing and thriving economy.