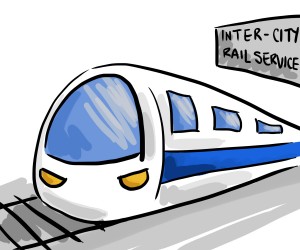 Improved inter-city rail transit to the Region of Waterloo was recently discussed by regional council, who are advocating new solutions to an alleged traffic problem that impedes transit efficiency.

Because of the high density of traffic flow to and from the area, a need has been expressed for faster and more frequent travelling systems.

Regional council approved at its Oct. 30 meeting its intention to push VIA Rail to restore trips that have been eliminated and to create a trip schedule that complements the GO rail service, as well as to encourage the province to create comprehensive inter-city passenger rail service strategy for Southern Ontario.

“The extension and improvement of rapid transit from Waterloo to Toronto would open up countless job opportunities for me personally,” said Cody Greer, a fourth-year student at Wilfrid Laurier University.

“If we had a better system of rapid transit and I was able to avoid commuting by car, I would actually consider applying for jobs in Mississauga and Toronto and it would open up my employment options.”

According to a study conducted by Statistics Canada, approximately 29 per cent of individuals sit in traffic in the Greater Toronto Area on highway 401 each day.

Currently, the only GO service that operates to the Toronto area from Waterloo at frequent and regular times daily is the GO bus which stops at both universities and carries on to Square One in Mississauga.

Recent Laurier grad, Sara Lawrence, believes that the improvement of our rapid transit system would be an asset to the region.

“For me personally, if I had stayed in Waterloo, that would have opened more opportunity for me in terms of working in Toronto,” she said. “I think it could be beneficial for people looking to move their work outside of the city.”

Veronica Naas, rapid assistant for the Region of Waterloo, explained that a proposed “Transit Hub Project” is currently in the works.

“This ‘hub’ would link together VIA Rail GO Transit, GRT, the proposed  Light Rapid Transit,” she said.

“It would serve as a central stop where commuters would be able to catch all forms of transportation in one place.”

The hub is set to be located at King St. West and Victoria St. North and will be called the “King/Victoria Transit Hub.”

“However, this hub would allow the systems to be connected so that people can hop on a bus, catch the LRT, catch the GO train, etc.”

The Region is also calling  Metrolinx for an extension of two-way GO train service between Union Station and Mount Pleasant on the Kitchener line. The Region would like to see this include a stop in downtown Kitchener.

GO Transit and Metrolinx also have major expansion plans in the works for southwestern Ontario, which they are calling their “Big Move” project.

This project will entail the complete renovation and improvement of Union Station downtown Toronto, as well as the extension of various train lines and the construction of new lines in the GTA and Hamilton area.