Nuit Blanche: A search for the fake people

Having never been to Nuit Blanche, Toronto’s annual all-night festival in which artists transform the streets into a massive public gallery, I decided to plan my night in a different way. Covering such a large expanse of the downtown core, it is near impossible to see everything Nuit Blanche has to offer. So it was decided. I must find the fake people and kidnap one of their kind.  This was my mission.

The “fake people,” as I termed them, are life-sized, human-shaped sculptures made from boxing tape.  The actual title of this interactive installation piece is Outsiders 2012. But I thought “fake people” made my mission sound sinister enough to be cool.

Exiting St. Andrew station, amongst floating, green, illuminated space invaders, I made my way towards The Eaton Centre, the fake people’s main headquarters. To my surprise they were well guarded by elastic fencing and old ladies in red uniforms.

How cruel, I thought; to be named by your makers in such a satirical way. To be trapped inside a mall and held hostage by these red-suited hoary old women with no mercy.

Although they were quite friendly toward real people, they wouldn’t set even one of the fake people free. I became even more determined to kidnap one: for it’s own good.

Seeing a propped open emergency exit right next to the fake person detention centre, I thought perhaps there could be a main storage area where I could stealthily snatch one away. There wasn’t. And I ended up getting lost in the creepy back-passageways of the Eaton Centre.

It was a terrible, claustrophobic maze full of garbage and dripping pipes. With every door I opened, I expected to see Yonge St. and a cavalcade of people with dilated pupils and glow sticks. But only more cement passageway.

Finally, I saw a garbage man, but before I could ask how to get the hell out my photographer started running away, apparently paranoid that we were going to get arrested for trespassing.

We ran for so long that my lungs felt like they were going explode out of my mouth when we finally found an exit door… that was being guarded on the other side by a zombie.  Ridiculous. It stared at us stupidly and didn’t say anything. I began to laugh uncontrollably as we walked away, glad to have ended our search for freedom with a nonviolent monster.

I looked up to find myself at Yonge and Dundas Square, and there it was. A crowd of people, on top of which was a fake person body surfing!  I ran for it, made my way to the middle of the crowd and yelled at everyone that I wanted a “nice” photo with the fake person.

Everyone was kind enough to move aside while I placed the fake person’s arm around my shoulders and posed for a photo. I had it. This was it. This was my fake person. And just as I was ready to run for it, it was gone.

Being in the middle of an open space, I imagine it would be quite difficult to steal a life-sized human-shaped sculpture from a crowd of people unnoticed. I was astonished. The fake person was stolen from my arms with hundreds of witnesses and was now nowhere to be seen. I stood on a bench to get a better view of the square. Nowhere.

The purpose of Outsiders2012 is to highlight the way we treat strangers. From what I saw during Nuit Blanche, the majority of people keep strangers locked behind elastic fencing, and throw them into crowds of people without a thought about their well being. Oh, and try to kidnap them.

Reading the statement about Outsider2012 on Nuit Blanche’s web site, I was surprised that this was the only motivation mentioned about this installation.

Encountering plastic life-sized human-shaped “strangers” isn’t going to incite the same reaction as encountering an actual human stranger. A plastic sculpture available to the public is a commodity, it’s something to take and to have and to do with what you will. I don’t think people see strangers as commodities.

What I took from the installation was more so a commentary and comparison on the physical similarities between human strangers and these “fake people.” When you see a stranger on the bus or in the street, you recognize that they have a similar physical shape to yourself, but you understand the mystery behind what is the inside of that stranger: their thoughts and their opinions that you don’t know.

I thought the fake people represented this common encounter that humans have on a regular basis, more than they show how humans actually treat strangers. At the very least, I know I would never kidnap a real human. 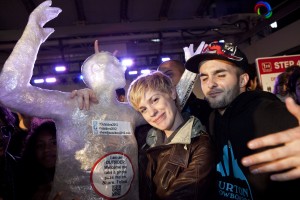 Adapting a masterpiece: The Last of Us

A review of “Her Loss” by Drake and 21 Savage