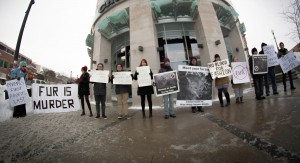 Canada Goose jackets have become wildly popular in terms of winter apparel — but not everyone thinks they are morally correct.

The Kitchener Ontario Animal Liberation Alliance (KOALA) rallied in front of Channer’s Men’s Apparel in uptown Waterloo on Saturday to raise awareness about animal abuse and to protest the sale of Canada Goose jackets. KOALA speaks openly about the alleged abuse of Canadian wildlife in the manufacturing of the popular winter apparel.

Canada Goose, a Canadian outdoor clothing company, uses real coyote fur as trim on the hoods of their popular parkas.

“We’ve done protests against fur farms in the area here and we’ve protested at Channer’s a few times,” shared Malcolm Klimowicz from KOALA. “We had a lot of good responses from the public.”

According to Klimowicz, Canada Goose uses leg-hold traps to capture coyotes — a practice that is only permitted by licensed trappers.

“The animals get stuck there and they could be out there for weeks sometimes,” Klimowicz said. “They will chew off their own legs, they will freeze or starve to death; they could be eaten by other animals. They also don’t only catch coyotes; they catch companion animals, like cats and dogs.”

“When they do catch them they are often beaten to death so that they don’t ruin the pelt,” Klimowicz explained.
Bill Townsend of Channer’s Apparel spoke with The Cord in an interview and said that the store did not experience any problems with KOALA’s protest. “They stand outside and chant about not buying fur … most of our customers don’t put much weight into what they are saying,” Townsend shared.

Townsend also believes that Canada Goose obtains their fur in a humane fashion.

“The fur trim on the coats is an integral part of what they do and it is acquired in a humane fashion if you can call it that,” said Townsend. “This is done through a managed process and the fur is just a result of that process. Canada Goose utilizes the fur and makes the product.”

Despite the efforts of the protesters, Townsend also did not foresee any change in Channer’s sale of Canada Goose products.

“Canada Goose is a huge part of our business,” Townsend added. “There is a commerce attached to the fur trade and there is a trickle down. This fur trade is providing jobs for people and it is creating commerce.”

Jack Kinch, executive director at the Kitchener-Waterloo Humane Society, explained that the commercial use of animal by-products, including the use of fur, is not considered to be animal abuse under the rules and legislation of Canada, the province of Ontario and the Waterloo Region.

“We’re against using animals for testing and that sort of thing, but we also recognize that there are industries that rely on animals for their products,” Kinch said.

KOALA recognizes the legislation that allows for the commercial use of animal by-products.

However, they advocate for the liberation of all animals and do not agree with any ethical argument regarding the use of fur for the clothing industry.

“The majority of people who wear these things live in southern Ontario where it’s really not that cold,” Klimowicz said. “I think the point is that having fur trim is really not necessary on a jacket.”