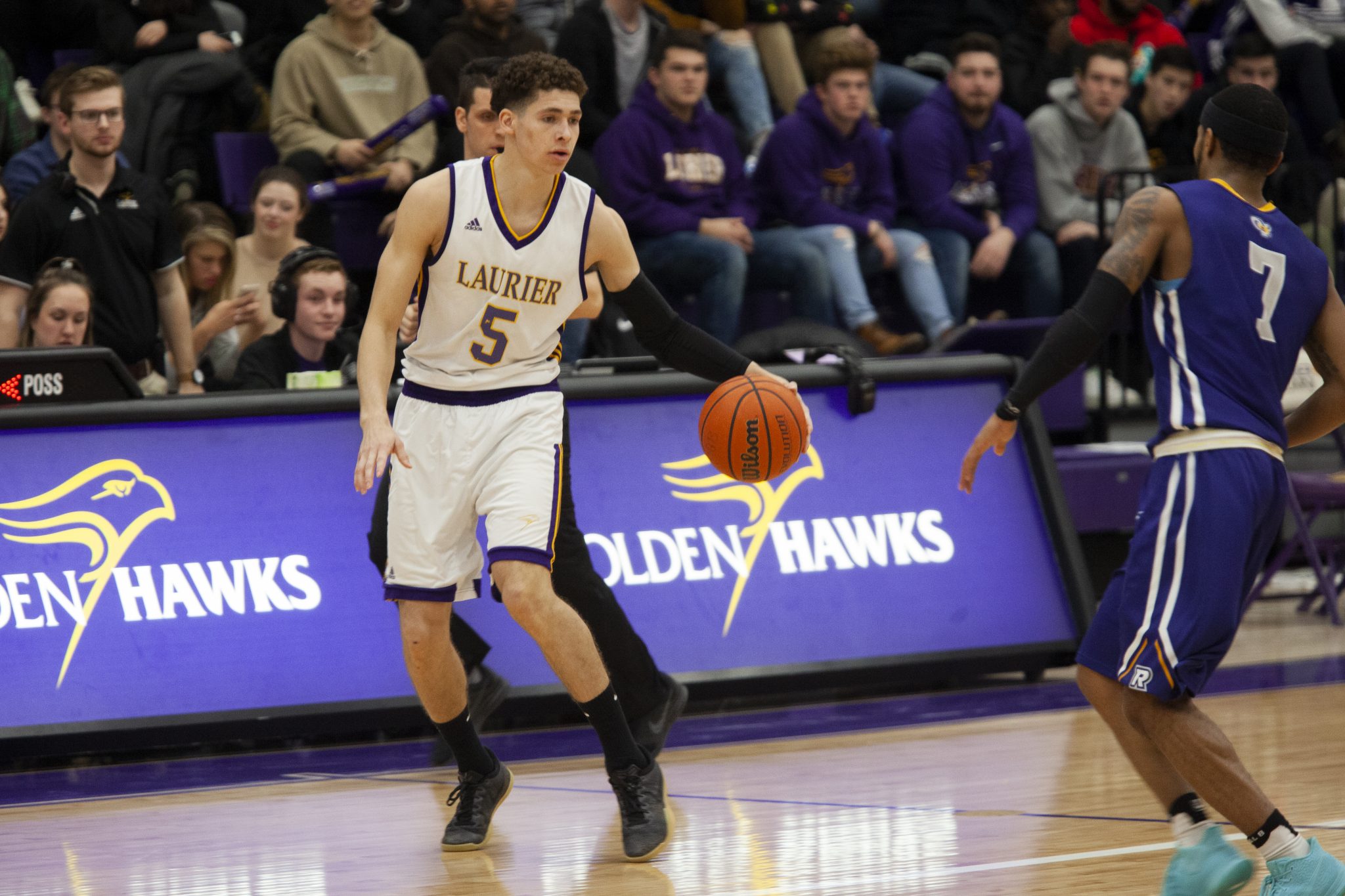 For the first time since 1976, the Laurier Golden Hawks men’s basketball squad hosted an OUA semi-final and in front of a full house at the Athletic Complex, the #8 ranked Golden Hawks did not disappoint in giving an exciting one against the #3 Ryerson Rams, falling 99-84 in a valiant effort.

To the surprise of some, Laurier seemed to be the team ready and unbothered by the moment.

On the other hand, Ryerson and their veteran-laden squad seemed rattled to start committing five turnovers in the first 4:07 of the game, three of them by star big man Tanor Ngom.

“I thought it was great. We didn’t come out nervous. Everybody was playing with confidence and we executed keeping them on the outside, challenged as much as possible and really trying to get the rebounds. They got rattled and they went away from what typically worked for them and they had to go to option B, sometimes option C and that’s what we wanted. To really push them to things that they maybe didn’t really wanna do at first and I was happy with that,” coach Serresse stated.

The issue for Laurier not being able to take advantage of such a moment was foul trouble as Ryerson went 11-11 from the free throw line in the first quarter alone, carrying them to a 21-17 lead at the end of the first quarter.

The second quarter was a nightmare of a quarter for the Golden Hawks. Ryerson opened up with a 5-0 run in 22 seconds (8:21 to 7:59) to push the lead to nine. From there, Jayden Frederick took over for the Rams as he had 13 points in the quarter and was red hot from three. Laurier also struggled to stop the bleeding as Ryerson outscored the Hawks 33-18 to go up 54-35 going into halftime.

“Funny enough, we got nervous in the second quarter. Some foul trouble, some lineups that I wasn’t really a fan of, we didn’t really have a choice, we tried to go to certain matchups but it didn’t really work out the way we wanted and we just put our head down a little bit too. It’s tough in the first half when you only have two timeouts. I burned one early and then burned another one, they kept making runs, so realistically, it was all about trying to show a vibe that that’s a bad quarter, knowing we were gonna make a run at one point,” coach Serresse said.

“In terms of getting respect, overall, obviously as we get better, we earn the respect and that’s something we use to get ourselves motivated and to work harder. Again, it showed tonight that we’re capable to compete but now a lot of teams can do that.”

The third quarter started out as an extension of what Ryerson was able to do in the second. Another 5-0 run to start with a JV Mukama dunk and Frederick three ball pushed the lead to 24. Laurier after this point showed the fight they really had in them. Slowly but surely, the Hawks cut into the lead.

This was aided by a Ben Stevens poster of Tanor Ngom which had the Athletic Complex on another level of noise and energy. There was a feeling of hope. The big dunk was part of an 8-0 run, which was later followed by a Kemel Archer and-one that cut the lead to 12. It was a game now and everyone knew it.

A Ryerson 8-0 run pushed them back but Laurier answered with another 8-0 run topped off by a Chuder Teny three-pointer that cut the lead to eight points. In the fourth, it was a continuous back and forth as Laurier at one point cut the lead to five points with the score being 85-80.

Ryerson took over from there as Keevon Small and Jayden Frederick hit three three-pointers to push the lead to 94-80.

The Hawks could not recover as Ryerson helped themselves to another OUA title game, eliminating the Hawks.

“We knew we were gonna have a chance to win if we were in the 80s and that’s what we did. The problem was our defense. We had too many ups and downs, they made some tough shots, kudos to them, they did a great job. Just too many mental mistakes within the game plan that gave them open shots on top of them making the tough ones and that’s why we gave up 99 points and it’s going to be tough win a playoff game if we do that.”

“In terms of getting respect, overall, obviously as we get better, we earn the respect and that’s something we use to get ourselves motivated and to work harder. Again, it showed tonight that we’re capable to compete but now a lot of teams can do that. It’s about consistency and we were consistently competing this year, way more than prior years. But I think we can still do a better job,” coach Serresse concluded.