Exploring the NIGHT\SHIFT art exhibits throughout the K-W Region 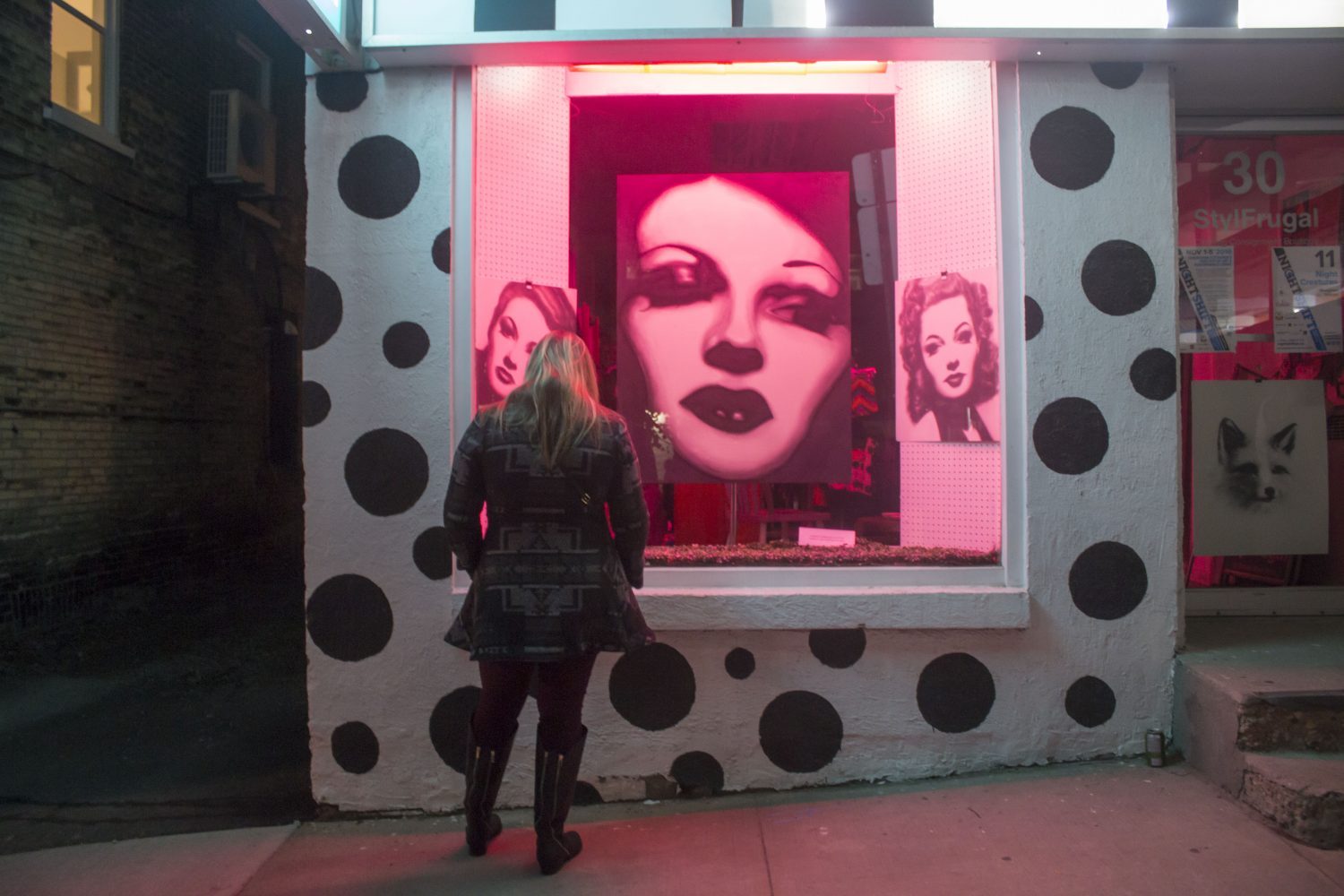 The tunnel was a sort of flagship exhibit for the event, as it was only a stone’s throw from city hall. As I got inside the building, the ground pulsed with the music, drawing people in. I got through to see what the event was about and immediately noticed the flashing light. The tunnel apparently responded to different frequencies and volumes of sound, producing an almost hallucinogenic experience, further amplified by the experimental music played by various local artists in a very small and personal venue next door. The entire experience boiled down to be like nothing I had ever experienced before, which I’m sure was the intention of Bernie Rohde and Nik Harron, the creators of the tunnel.

Seeing yourself on camera is always a hit-or-miss situation. Either you look great and can’t get enough of yourself, or you can’t wait to find out how to un-tag yourself from a less-than-generous depiction. The 24-hour dolly, run by Dylan Reibling, right in the reception of Kitchener City Hall, drew quite the crowd.

“Sometimes it boils down to people having a very quiet and intimate moment in a weird way in a very public place,” Reibling said.

The camera shot a 360-degree view of the subject and transcended all expectations of any kind of video. It brought together a closeness amongst the viewers, as if seeing the subject from every physical angle brought a new level of connectedness. Needless to say, the line for this piece was steady and extensive.

Descending the stairs of the Adventurers Guild Board Game Café & Tavern into the medieval setting of the Bloody Theater, the first thing I noticed was the atmosphere. It was dark, with small candles near the screen as the only source of light. The word “medieval” kept popping into my head.

The artists in charge of this exhibit, Dan Root and Meg Harder, explained that the work was a multimedia piece, marrying the songs of Dan Root, as well as the projected images of Meg Harder, producing a rather marvelous ten-minute show. The show was inspired by the book, Martyr’s Mirror.

“[The book is] a collection of stories about people who were martyred for their Anabaptist beliefs,” said Harder. The basement venue was at mass capacity, with people sitting on cushions to watch the ten-minute show.

Approaching the West side of Kitchener City Hall, it was full of noise and activity. People were darting around, drawing onto the large sheets of paper on which segments of downtown Kitchener were projected onto, serving as tracing lines.

Shana MacDonald, an assistant professor at the University of Waterloo stood in the middle of it all.

“[It’s important to take] the art out of the gallery and making it interactive in a public space,” said MacDonald.

The place definitely qualified as public, with scores of people waiting in line to make their mark onto the already intricate network of marker strokes, bringing a modified version of the city to life. It was an alternative take on the construction which causes traffic between the two cities, to the chagrin of all commuters.

Collage party reminded me of my early childhood, which admittedly was not that long ago, however felt that way due to many all-nighters, even on school nights. There was an abundance of construction paper, glue, scissors and a whole lot of running around. Stephen Lavigne and Sarah Kernohan, the artists and curators in charge of the exhibit, repeatedly assured people that there were in fact no rules, within reason.

This theme of giving over-creative spaces was an overarching theme throughout many exhibits during NIGHT\SHIFT. The exhibit was more on the light side of the night, with the presence of children attesting to the fact.