Exploring the origin and utility of slang 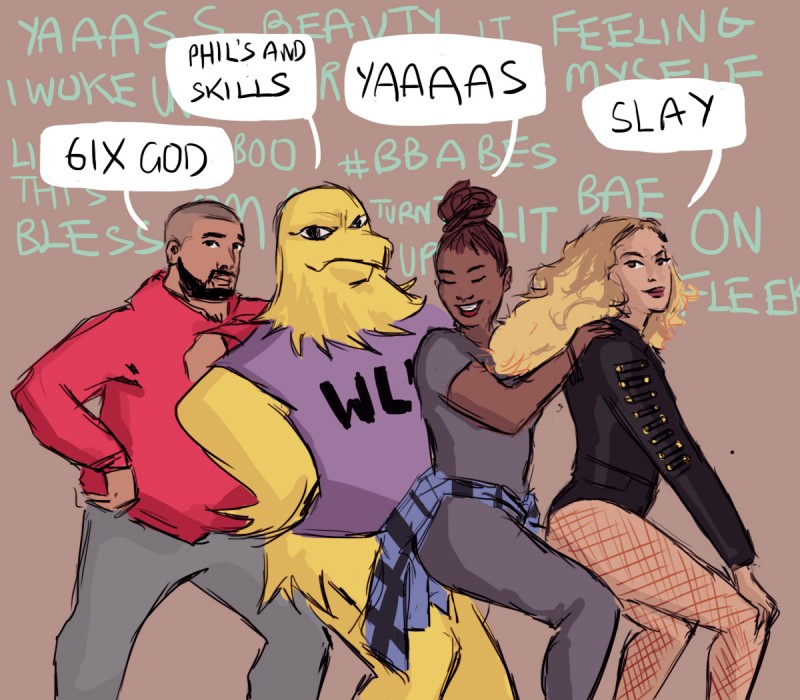 Do you ever find yourself unable to convey the message you want without the use of slang?

Perhaps your elongated “yaaaas” is justified, and your incessant use of “beauty” can be accepted as your inability to use breadth of vocabulary to express your thoughts.

While it has the potential to alienate, it can also be a way of bringing a group of people together.

Although language and vernacular present familiarity, slang plays a key role in facilitating inclusion. Millennials incessantly use new slang terms to express themselves, allowing for widespread use.

What many people don’t realize is some slang terms have been discarded and recycled for decades. For example, “OMG,” the abbreviation of “oh my god,” dates back to 1917 when it was first used in a letter from Lord Fisher to Winston Churchill.

In a study conducted by Yanchun Zhou, an associate professor of foreign linguistics at the Changchun University of Science and Technology, she said, “slang terms from subculture groups are adopted by common people and become common peoples’ vocabulary.”

Many overused terms have stemmed from black social media, such as “on fleek,” “bae” and “yas,” which come from somewhat cultural roots.

African American Vernacular English, also known as AAVE, is one of the most prominent influencers of modern day slang. Many terms that now have been removed from their roots are derived from dialects such as AAVE.

However, some terms including “ratchet” and “ghetto” carry underlying offensive connotations to some that have been popularized as universally accepted vocabulary.

This normalizes association of inherently black adjectives to actions viewed in society as less than or inappropriate.

Language plays a key role in promoting inclusivity and community within social cohorts.

Matthew Gidman, a coach for the Wilfrid Laurier University Dragon Boat team, highlighted the use of slang in sports as terms, “not made to confuse people who are not involved in the sport, but they are necessary for competitors and coaches alike.”

Technical slang terms assist athletic performance, but at times can transcend into every day conversation.

The LGBTQ community has been a key source for many popular slang terms.

Scott McPherson, a third-year business student brought up an important aspect of slang terminology and the isolating effects an outsider may face.

“To be able to understand [one] term, you have to know even more slang, which shows how vital of a role it can potentially play,” said McPherson.

Labels on different sexualities and the roles of individuals within the LGBTQ community are among the basics of common slang terms.

From drag queens to individual social cohorts within the LGBTQ community, the deeper you immerse yourself within the culture, the larger the pool of slang terms.

These slang terms can differ based on the group of people in a community, as well.

At Laurier, students have created terms, whether it be in the form of hashtags such as #BBAbes, or assonances such as “Phil’s and Skills,” stemming from separate social cohorts such as programs or faculties.

“The reason people constantly use slang is … to show they are one of the qualified members among a certain distinct group,” said Zhou.

Coming to university is like a salad bowl of many different cultures coming together. As apprehensive as students are to accept new slang, it soon becomes commonplace and a part of daily vernacular.

So the next time you elongate your “yas,” think about where it came from and why it’s in your daily vocabulary. You may be surprised.