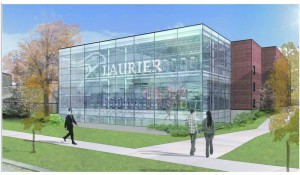 In a five million dollar project, the Fitness Centre at Wilfrid Laurier University’s Athletic Complex will be expanding to nearly double its current size.

Peter Baxter, director of athletics and recreation, finalized the plans in mid-April regarding an expansion to the current facility.

“The first thing we’re doing is addressing the capacity issue,” Baxter said. “When you build it, people will come.”

Only seven years ago in 2005, a $4.3 million addition was added to the Fitness Centre. The addition tripled the size of the fitness component, with a hundred new pieces of equipment.

“Basically we’re almost doubling the size of our Fitness Centre,” Baxter commented. “We’ll be expanding up to include a second floor as well as out past the front windows [of the Athletic offices].”

By doubling the size, it will become more accessible for students, as currently the facility reaches capacity frequently.

“Particularly at the beginning of each semester, it’s pretty crowded, especially at peak times like right in the morning, especially at lunch and of course in the evening, which can be very busy right up until eleven o’clock when we close.”

The plans are set to begin Aug. 1, 2012 and are expected to be completed by Aug.15, 2013, during which time, the current door will have a tunnel hoarding for entry for students, enabling a pathway to the facility.

The rest will be fenced off for construction for the duration of the year.
“The [workers] will be working on things like the elevator and they will do the steel structure so we can still utilize the downstairs during the construction period,” Baxter explained.

The expansion will follow a small project to increase, as well as mend portions of the current Fitness Centre.

Almost $250,000 of machine equipment will be purchased for the upcoming year, while the lockers and showerheads will be replaced.

The plans for the centre include expanding the cardio area, which will be relocated to a second level, an expansion of the free weight area on the ground floor, as well as including a fitness assessment testing area and an area for a new wellness program.

In addition, a separate cardio area can be cornered off for specific groups or evemts, such as women’s only fitness or to accommodate ethnic and religious groups.

Also included are two new dance studios on the second floor, accessible by Fashion n’ Motion, the competitive dance team, as well as groups that wish to rent the space out.

A student media component to the project is also on Baxter’s agenda, where varsity games streamed through webcasts, videos online and primetime television shows can be watched for students working out.

“We still need to fundraise for that component because that’s not part of the project but this is the idea.”

Finally, Baxter hopes to increase the sustainability portion of the Athletic Centre.
“We’re trying to do as much sustainability stuff to reduce our energy use, so there will be a new ventilation system to make sure that it recycles outdoor air with the current air. And of course, with a lot of glass, it actually helps with the heating efficiency in the building.”

Construction will begin this August with outside hoarding and layout details.

From late August 2012 until April 2013, contractors and construction workers will refrain from interfering with the use of the facility for students and student athletes.

“The good news is it will not affect our current fitness center operation during the year of construction,” said Baxter. “You have to muddle through some issues of construction, but it won’t really disrupt our programming.”

Next summer, when the project is expected to be finished, the facility will be closed entirely to rip up the flooring, repaint and finish the final features.

“In the summer of 2013, we do have it shut down for about a month so that they can cut in the stairs and so forth,” Baxter explained. “We’ll move some machines, because it isn’t hitting the bulk of the student population.”

With the project required to stay within a $5-million budget, the extra expenses were aided from the student levy and university.

“The students already passed a referendum a year ago this past spring to start a collective for this, which they started in September of last year, so the financing is already in place and has been approved by the students,” Baxter explained.

He also promises that it will not change the student fees for the following years, as it’s already been taken from the student levy fee from the beginning of the 2011 school term.

The main intention of the expansion project is to promote the importance of the students, Baxter explained. The growth in space as well as increase of equipment will allow the centre to be more user-friendly and accommodating for students.

“We’re building it to maximize the space for student use,” Baxter said. “This is all student money.”

“We could always use more space for coach’s offices and whatnot but this wasn’t the project to do it. We wanted to maximize the programmable space for students.”