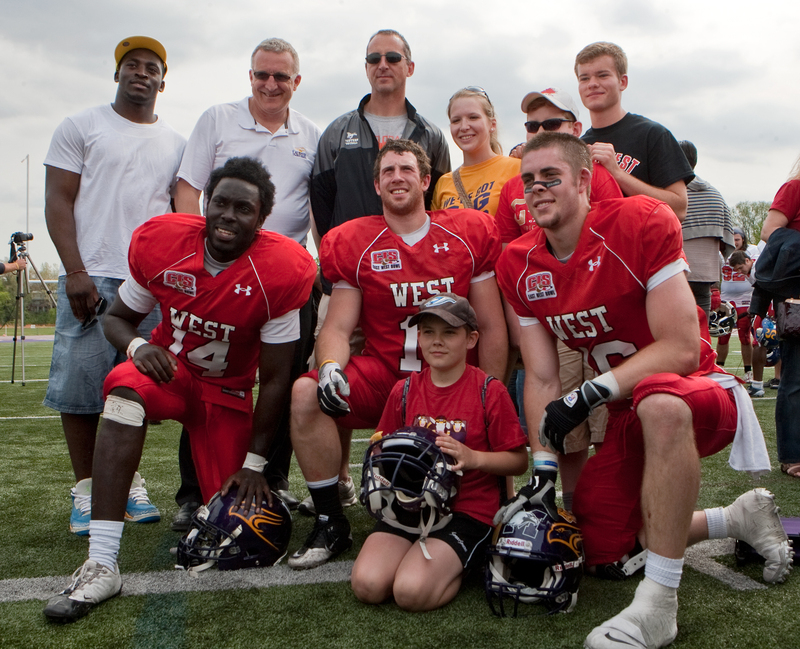 “Senior season is a special season,” Laurier defensive back Odum said. “I’m just looking forward to the last year with the guys, making plays, and all that stuff.”

Odum, fullback Dell and receiver Anthony traveled to London earlier this month to represent the Golden Hawks and partake in the East West Bowl, an annual week-long training camp organized by the Canadian University Football Coaches Association (CUFCA), and hosted by Western University.

The week includes training, practices and evaluations held by coaches and trainers from across Canada in the Canadian Interuniversity Sport league, culminating with a final all-star game held on the final day.

“It was tough,” Anthony explained after the all-star game. “It was really physically and mentally exhausting but coming together with guys from all across the country and putting in an entire playbook in four days. It was tough, but it was a great experience and I’m really happy to be here.”

The East West Bowl brings together 90 of the top university football players from across the country, where Canadian Football League scouts and team can examine the prospects for the draft the following year. Odum, Dell and Anthony, representing the West team, learned extra skills and plays that will allow them to excel in the upcoming year with the Hawks.

“It’s a bit of a reloading year,” Dell explained. “We’ve got a lot of young guys coming in, but that’s good. A lot of youth, a lot of fresh legs and I think we’ll be set. A lot of older guys on the team are great leaders so we just have to stick with our philosophy and roll with it.”

Odum had an interception and returned two kickoffs, racking up 25 yards, while Anthony caught three passes for 34 yards and returned a punt and a kickoff for a total of 38 yards. Competing with the best players from across the country was an adjustment, but the three fourth-years obtained promising help.

“It was different playing with a lot of different guys,” Odum said. “We only had four days to really get used to playing with each other, but everyone here is a great athlete so it was a much higher level of football, but it was great.”

“You come out here, you see how you stack up against some of the best players across the country, and then you take what you’ve learned, mistakes you’ve made, and try to apply it in your training camp the following year,” Dell agreed. The week also gave the three Hawks a chance to preview their upcoming season. They will open at the University of Toronto against the Varsity Blues on Sept. 3 before having their home opener the following Saturday against the Queen’s Gaels.

“Hopefully I can carry what I learned here into next season and help the Golden Hawks go as far as we can,” Dell said.

Anthony agreed. “We have a strong chance to take the Yates.”

For Laurier head coach Gary Jeffries, the experience will be huge for three players he expects to be leaders on what will be an inexperienced 2012 Golden Hawks team.

“It was a really big week for all three of them,” said Jeffries. “They’re all leaders on our team and any time you get to go to an elite camp and be around the top players in the country, it can do nothing but good.”

Coming off a 2011 season that saw Laurier bow out in the first round of the playoffs — the team’s earliest exit in nine years — Jeffries’ squad will see a significant turnover in 2012. Gone are key players like quarterback Shane Kelly; receivers Shamawd Chambers, Dillon Heap and Mark Surya; linebacker Sam Aird; and defensive lineman George Kourtesiotis, making way for a youth movement that includes a 54-player recruiting class.

“We lost a lot of kids and we thought it was time to regroup,” said Jeffries. “I think we’re going to be a young, exciting football team, right through the lineup.”

Jeffries added that the quarterback position will be decided in training camp. Steven Fantham comes in with the most experience, serving as Kelly’s backup last year.