Closing the gap between men’s and women’s sports 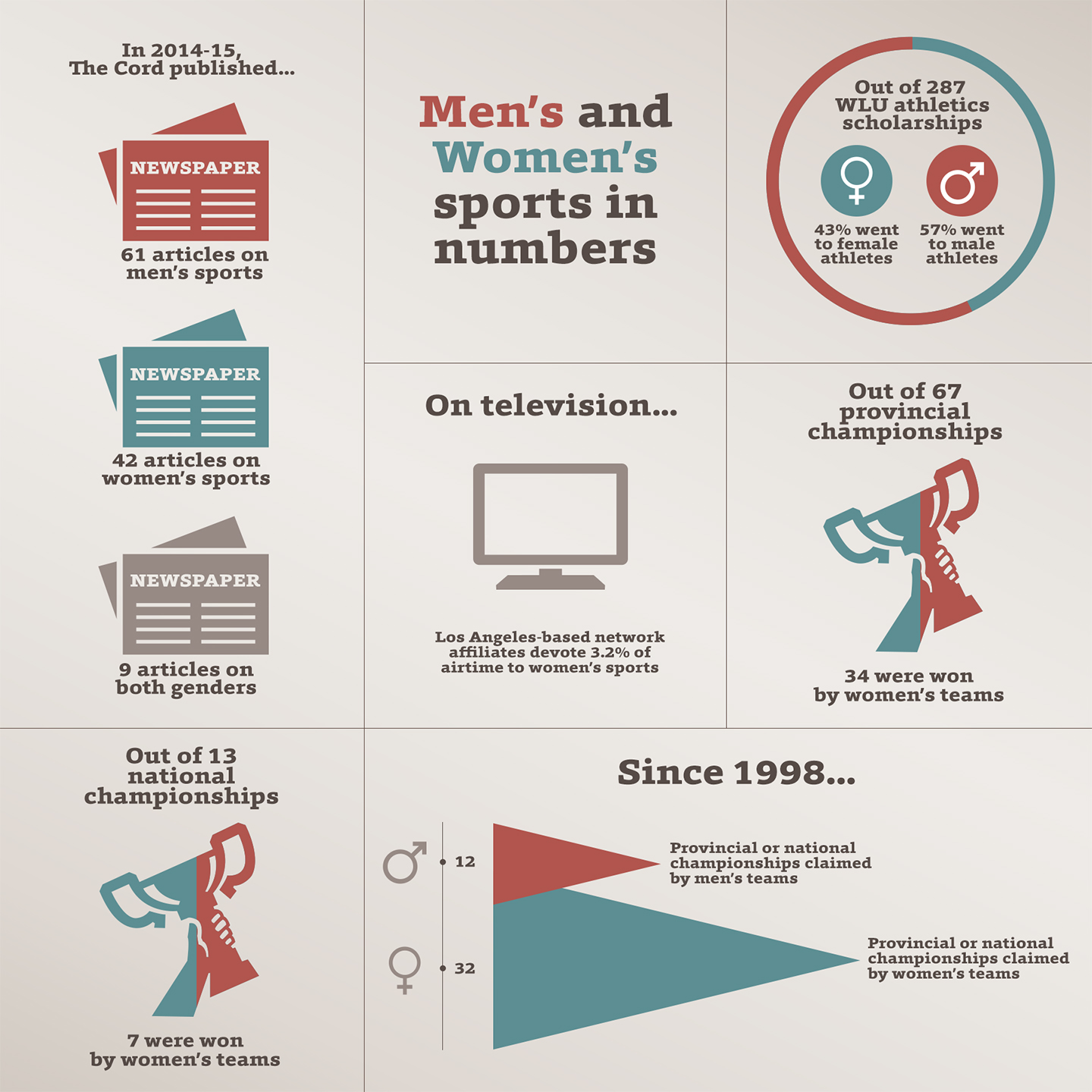 When Peter Baxter came to Wilfrid Laurier University in 1998, the institution was a football school.

Funds, time and dedication were put entirely to build the men’s football program. It wasn’t because the department of athletics and recreation weren’t trying; it was because football was where the money was.

But when Baxter was hired, he wanted to dedicate himself to the entire program — and all genders for excellence in sport.

“We needed to compete on other levels,” Baxter said. “We started off in those days to hire a full-time coach and athletic director, and [a women’s basketball coach] … and then we hired Peter Campbell, the men’s [basketball] coach because we wanted to compete in basketball.”

Why basketball? You could find interest in the community.

And then came hockey — both men’s and women’s teams began to evolve as Baxter continued building the Golden Hawk program. Changes to the facility were made because the women’s locker room was a third of the size of the men’s locker room, and resources weren’t the same.

“To me, they are just athletes. They are all student-athletes and they are all high-performance athletes, and I didn’t want to distinguish between a football athlete and a swimmer, or a female hockey player and a male hockey player,” Baxter said. “They are two different teams, but I want to make sure they are treated equitably through.”

Fast forward to today and the Laurier program has an equal amount of men’s and women’s varsity sports with seven teams each and four co-ed programs. But the level of performance, marketing, funding and outcomes can vary based on gender.

But funding continues to be skewed. According to the Canadian Interuniversity Sport athletic financial awards report, Laurier provided 287 student-athletes with an athletic scholarship. 57 per cent of those who received an award were male athletes, while 43 per cent of women athletes received scholarships.

Additionally, because of the size and money needed to run the program, football continues to be the largest portion of a varsity budget. Overall in the CIS, 1581 student-athletes participating in football received a scholarship, amounting to approximately $2,416,235 of the total $15,981,189 given to student-athletes at member institutions.

So what are the differences that the audience or marketers see in the women’s and men’s game that may make one favourable over the other?

Paul Falco, head coach of the women’s basketball team at Laurier, has coached both men’s and women’s basketball at the university level. He said he hasn’t found a huge difference in the coaching styles aside from men being bigger, faster and stronger. But in terms of style of play, both games are very similar.

To Falco, women catching up to their male counterparts is an irrelevant term.

Rick Osborne, head coach of the women’s hockey team since 2003, said a lot of it could do with the size and strength of the teams the audience are watching. The physicality of the game is different between men’s and women’s hockey — shots are harder and players are bigger in men’s hockey, which makes it hard to compare.

“The fans love the size, speed and physicality of the men’s game,” Osborne said. “A women’s game looks good from ice level when two good teams are playing, but from up top in a large venue, it can look slow because of the size.”

“There are fans of the women’s game, but smaller in quantity.”

Fans, and ergo interest, also come from media coverage. A study done by the University of Southern California in June 2015 found coverage of women’s sports has barely budged in a quarter-century in the United States despite dramatic increases in the number of women participating in different levels of sports. Los Angeles-based network affiliates devote only 3.2 per cent of airtime to women’s sports, down from five per cent in 1989. The same can be said about Canadian news.

This challenge continues to be one of the main issues women’s teams deal with. The Silhouette, McMaster University’s student newspaper, critiqued their own coverage from Sept. 2014 to Feb. 5, 2015. They published 43 articles on men’s teams, 20 on women’s and seven on “mixed” or both genders.

Between May 2014 and April 2015, The Cord published 61 stories about men’s teams, 42 stories about women’s and nine stories including both genders.

“It’s the best kept secret of entertainment … We’ve got to do our part to engage, but there’s got to be just as much coverage on it.”

Osborne feels there is “great support” at Laurier for student-athletes and administration and coaches feel good about that.

But from a coach’s perspective, the support needs to be leveraged with a focus on student-athlete performance as well.

Baxter, Falco and Osborne agreed Laurier has the ability to produce “world class athletes,” but it needs the resources for both men and women to continue to grow.

“World class athletes and successful teams will have no trouble adding value to the department and the university and that is how we ‘catch up’ and stay relative, especially in challenging budget times,” Osborne said.

And above all, it’s important for Laurier to maintain a competitive level for its women’s teams.

“The main thing is that we can compete,” Baxter said.

-With files from Killian Cuppage and Drew Yates