The Wilfrid Laurier University women’s curling teamcaptured the CIS bronze medal with an 8-3 victory over the University of Prince Edward Island. 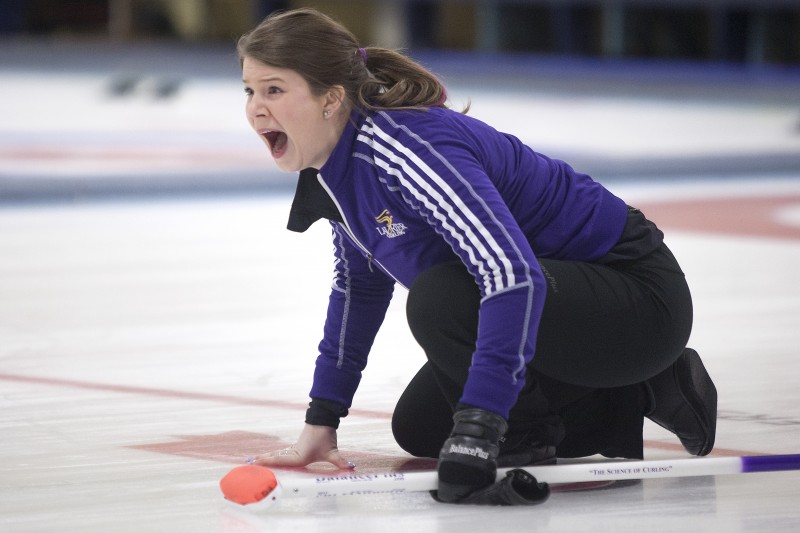 The Wilfrid Laurier University women’s curling team repeated last year’s performance as they captured the Canadian Interuniversity Sport bronze medal with an 8-3 victory over the University of Prince Edward Island.

The women’s squad ran into some bad luck in the semifinal draw against the University of Alberta Pandas.

Down 5-1 in the eighth, the Hawks had an opportunity to score a rare triple against Alberta skip Kelsey Rocque, but a tap shot by Howard wasn’t enough to keep the draw close.

The Hawks settled for a single point and Alberta ran Laurier out of rocks in the next end, sending the Hawks to the bronze medal game.

The rink rebounded back in the bronze medal game against UPEI.

The draw remained tight, with both rinks trading singles through the first half of the game. It wasn’t until the seventh end when UPEI skip Veronica Smith was heavy on her draw, giving Howard a chance to draw for three.

The Hawks came away with a double to take the lead and followed up with a huge four-point end to take a commanding 8-2 lead after eight ends. UPEI picked up a single with the hammer in the ninth, sealing the victory and a bronze medal for the Golden Hawks.

The season marks the end of an era for Mathers and Howard, who both played their last games as Golden Hawks Saturday afternoon.

“It’s amazing, and they work so hard — I’m so proud of all of them,” Mathers said of the team. “It’s bittersweet being the last year obviously. It’s great to leave with a bronze medal but it’s also hard to walk off the ice and you know that’s your last game as a Golden Hawk.”

Looking forward, Rice is confident that with the amount of talent the program has, the varsity team will remain competitive next year.

He is confident that the talent coming through the system throughout the next couple of seasons at Laurier will contribute to more success at the national level.

“We have lots of good talent here and coming up into the upcoming season, we fully anticipate that we will be competitive again next season,” he said.