Archiving to tell us who we are 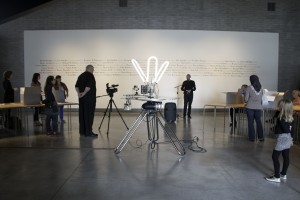 The latest exhibit to take place at the museum is described as a “contemporary cultural archive” by the curator of the exhibit, Krista Blake.

“It’s an installation, a piece in itself, but I really see it as a real archive. When I started this project, I decided I was going on this mission to create this cultural archive of today’s most creative minds and the people who are at the top of their fields, whatever that may be.”

The exhibit is built around individual numbered boxes. Submitted by contributors, patrons are able to go through and explore the compiled contents of the boxes.

Blake said she contacted a number of artists and invited them to contribute to the exhibit. Having the boxes numbered rather than disclosing the name of the artist was something Blake felt added to the experience.

“Once you see people open a box, there is a moment of suspense, of something amazing happening. Because I numbered the boxes and didn’t tell people initially who the box belonged to, I really wanted that moment of having no idea what is going on here.”

Blake was approached by the museum’s current in-house curator, Christian Singer, to curate the show and jumped at the opportunity.

“He asked if I would be interested in doing a show and I said yes, just as long as they knew it was going to be out of their usual mandate.”

Blake stressed that she wanted to bring something different to the exhibit.

“When I first got asked to do this show, the first thought that popped into my head was that at the Clay and Glass you can never touch anything, so I wanted to create a show in which you can touch everything.”

The exhibit surrounds a sculpture designed by Montreal artist Pascal Dufaux, which records people as they are experiencing the exhibit and projects the video feed onto a screen with a 45-second delay.

“The machine is about archiving, but more in the sense of space,” said Dufaux.

“I call it a time machine because it gives you a complex mirror. You have this 45-second delay that shows yourself, but in the past, so it’s an immediate archiving of yourself.”

With the exhibit built around the idea of archiving, both Blake and Dufaux see the exhibit speaking to who we are as humans.

“I think it’s important because it tells us who we were, who we are and who we are going to be. It’s not just about looking at the past, but also about what it can tell us about who we are now,” said Blake.

“It is a strong value because it talks about the existence of human beings, the way we collect things through the collection of what other people have made,” said Dufaux.

Blake hopes beyond the experience of seeing someone else’s life in this way, people also reflect on their observations.

“I really want people to experience it and hopefully learn something. Whether you like galleries or not, I want people to have that sense of wonder, and I think it’s working.”