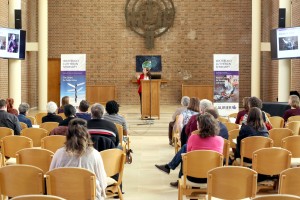 The Waterloo Lutheran Seminary gave sponsors the opportunity to come together and learn more about the 1,150 Syrian refugees coming to the Kitchener-Waterloo area before the end of the year.

On Saturday, December 5, 115 sponsors were registered for a series of daylong workshops where they were educated on Syrian culture, history and what resources are available for both volunteers and refugees.

In a collaborative event between the Mennonite Central Committee, the Canadian Lutheran World Relief, Bring Back Hope, as well as Wilfrid Laurier University and the Seminary, the day consisted of three sessions. They included Syrian history and culture, understanding trauma and a panel discussion regarding settlement resources in the Kitchener-Waterloo region.

Kristine Lund, assistant principal of the Waterloo Lutheran Seminary, believes the event benefitted the sponsors with little to no sense of Syrian culture and history.

“A lot of us don’t know anything much about Syria before all the war and all the bombing that’s occurred and what we’ve seen in the media recently,” she said.

To Lund, the sessions were organized for volunteers to have an appreciation for the Syrian refugees and the country they’re leaving behind to come to Canada.

“There will be a lot of feelings about leaving that rich culture behind, as well as how they can maintain some important things as they move to Canada.”

A long with the Syrian culture, the Seminary incorporated the topic of trauma into their discussions and sessions. Lund said the Seminary wanted volunteers to have an understanding of what trauma might look like and how they can support a refugee who has experienced trauma.

“Many of the refugees have had many challenging experiences either in refugee camps, needing to flee and the whole process of immigration can be very traumatizing, and so for the volunteers who are working with those people we wanted them to have an understanding of what trauma might look like,” said Lund.

Volunteers were also educated on the settlement resources for refugees, which includes English classes.

“For people to have a sense of where they can go for a variety of resources we thought would be important.”

“We’re in process of getting a family so it was good to hear all the resources available, also some of the experiences that they might had come through in terms of trauma and to be aware of that and to be sensitive and to check our stereotypes,” she said.

“I think over the days when we bring our family I think a lot of these things are going to slowly get us moving again and thinking about all the different things that this family’s going to bring.”

Lund said the Seminary hopes to continue this event in January.