Wilson strives to make a difference

Dorian Wilson, of he men’s football team, and has made a clothing line with the soul purpose of situation in Brazil. 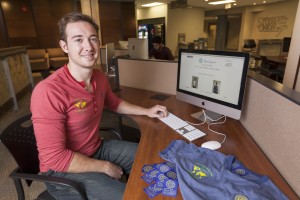 The FIFA World Cup is an international phenomenon that is watched and loved by billions across the planet.
However, something that many do not know is there is hidden tragedy lurking behind the spotlight.
Dorian Wilson, offensive lineman for the Wilfrid Laurier University football team, is a third-year communications student who felt the need to take action.

He and his business partner and friend, 19-year-old Ben Polk, teamed together this past summer, to form a clothing company called Revival Apparel.

A third of all proceeds go directly to charities in Brazil aimed to repair the damages from this summer’s World Cup.

FIFA is the organization responsible for what many would consider a social injustice.
In preparation for the 2014 World Cup in Brazil, thousands of people had their homes destroyed without compensation.

Militarized riot police forced locals to evacuate residents in order to make room for the construction of stadiums and parking lots in favour of the World Cup.

“We wanted to make a difference by spreading awareness about the cause,” said Wilson. “But we also wanted to generate some funds which can be used to help in a more direct way.”

Dorian was first inspired back in February of this year, during the rising fame of Nek-Nominations — where people were nominated to drink large amounts of alcohol, do something crazy, film it and post it on Facebook.

Dorian and Polk decided to change things up and instead post a video featuring a good deed.

The post was a success with over 8,000 views. It was also a great motivation for Wilson and Polk to take the next step towards making a difference.

Revival Apparel is a social entrepreneurship company, aimed to fight against the injustice in Brazil through the extension of Canadian manufactured clothing.

Wilson explained what influenced the involvement in his cause.

“There were a few videos circulating about the damages in Brazil because of the World Cup,” he said. “We watched them and wondered how this is allowed to keep going on. There were tons of people commenting on the videos and a lot of them were people saying, ‘Well I wish I could help but I don’t know how, so I’m just going to share this video instead.’ It got me thinking: If one were to help, what would be done?”

Dorian went on to explain that it would be beneficial to raise awareness and also raise money.

“I thought about a business method that could be used as a tool to help these people. And it ultimately fell in line with a social entrepreneurship. A clothing company ultimately came out of it,” he said.

Polk discussed what he felt when he first heard about the problems in Brazil.

“I thought the World Cup was going to be seen in a more negative light. I hoped people would not only see the positives but also start seeing some negatives — which we didn’t see. We decided to do something about it,” he said.

Many of them are now completely empty and unused — and they were built in the first place at the cost of many locals’ homes.

Few news agencies broadcasted the peaceful protests many Brazilians took part in to save their homes.

“When we were researching and actually finding out about the cold hard facts about what was going on in Brazil, we couldn’t find a single major news agency that has actually reported on this,” said Polk.

“It took a lot to actually figure out what was going on.

“Part of the problem comes down to the fact that FIFA has a global control on worldwide soccer competition,” said Wilson.

“When you play any soccer video games, it’s FIFA. They control the game. And people love their soccer … in other words, the world’s love for the sport blinded people from what else is going on.”

The two continued to talk about their plans for Revival Apparel in the near future.

“They are starting to represent what you stand for. That’s what Revival is all about.”

“The one thing that was cool, being university students, is that we’re able to have quality and low prices in our product,” said Polk.

“It leads to people being more inclined to purchasing our clothing, which will ultimately help raise more money and awareness.”

Revival Apparel hopes to deal with more issues beyond Brazil, collecting funds for more charities across the world.