The project aims to dispel the myth that human trafficking is something that only happens elsewhere and to provide the community with information and resources to help them protect themselves against human trafficking, specifically vulnerable populations like young women and girls.

Over 90 per cent of human trafficking cases in Canada are domestic cases, meaning they occur entirely within Canadian borders, and 70 per cent of those reported cases occur in Ontario.

And these statistics do not include the cases which go unreported.

The project was funded by a $10,000 grant from the Ontario Ministry of Community and Social Service, allowing the region to devote the required time and resources into developing a locally-based program rather than relying solely on national programs or programs tailored to other regions.

Over 90 per cent of human trafficking cases in Canada are domestic cases, meaning they occur entirely within Canadian borders, and 70 per cent of those reported cases occur in Ontario.

Prior to this campaign, the research and development team found that there was a lack of formal education in Waterloo on the topic of human trafficking, which could leave the public uninformed and vulnerable.

“So what we found was that, at the time of the needs assessment, no education was being provided in Waterloo region high schools and there was also a high degree of support from parents and educators,” said Sarah Gilbert, project manager.

“So, for instance, 96 per cent of parents indicated that they definitely would be in support of high school students receiving information on human trafficking awareness and prevention.”

During the development process, looking into previous projects of covering similar subject matter, drawing influence from other projects such as the RCMP’s national “I’m not for sale” campaign and toolkit.

“They had a youth awareness toolkit … this toolkit included posters, a Powerpoint presentation and a booklet. We really liked this format and the RCMP indicated to us that they had success with it so we decided to model our toolkit in the same fashion and we also created a website to act as a hub for information and for accessing the toolkit,” said Gilbert.

On the campaign website, ithappenshere.org, there is a wealth of knowledge surrounding the topic of human trafficking in the Waterloo region, as well as a toolkit that can be used for educational purposes in a variety of settings such as in classrooms or during seminars or presentations.

The toolkit includes a Powerpoint presentation, a booklet and a poster which are available upon request through the website.

“The presentation is designed so that anyone can deliver it, you don’t necessarily need to have knowledge in the subject matter,” Gilbert said.

The toolkit covers everything from the definition of human trafficking to a breakdown of the local statistics on human trafficking in Waterloo. It also provides tips for recognizing luring behaviours and how to protect yourself in a variety of different contexts.

One of the most striking aspects of the campaign is the imagery used in the posters. On one side of the poster is an attractive man with a sinister grin, on the other side is an image of a predatory wolf bearing its teeth, bringing new life to the age-old trope of the wolf in sheep’s clothing. 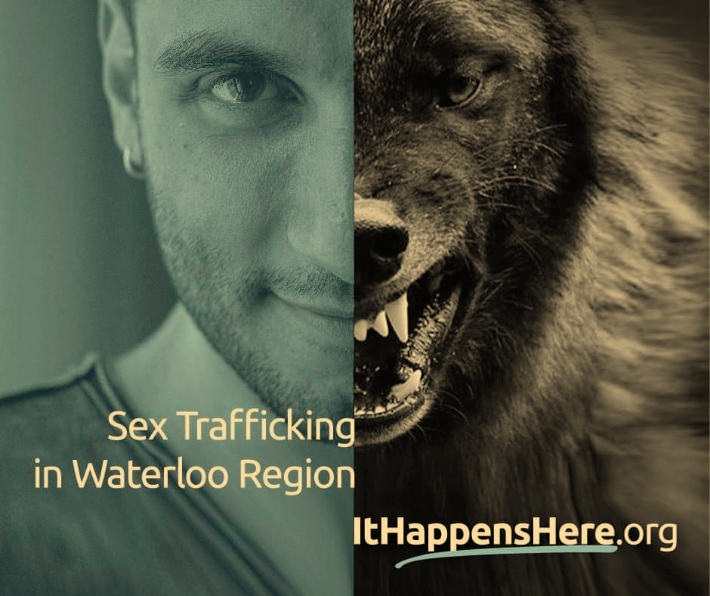 The committee’s vision for the poster was brought to fruition by local Waterloo graphic designer, Bob Bender.

“They didn’t want to go with something like the usual imagery of girls looking sad, because really that image is sort of after the fact,” said Julia Manuel, Chair of the multidisciplinary response to combat human trafficking committee and Director of the sexual assault and domestic violence treatment centre.

“It begins with a person who presents themselves as something they’re not.”

The simple yet effective concept catches people’s attention and provides viewers with some quick facts on human trafficking and resources they can reach out to for help.

“I think the posters are the big thing – they’re up in a couple of the hospitals, they’re going into nineteen high schools, we’re hoping to get them into bars and hotels, the libraries, community centers. The most important message that we want to send is that there is help out there for people who are in this lifestyle if they want to get out,” Manuel said.

“There are people and agencies who are available to help them.”