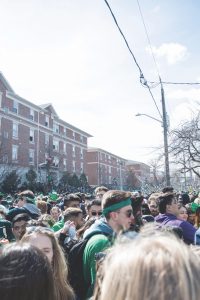 Wilfrid Laurier University’s most infamous holiday, St. Patrick’s Day, is on the horizon and both Laurier and the Waterloo community are preparing for the annual unsanctioned street party which takes place on Ezra Avenue.

“Unsanctioned street gatherings are dangerous. Laurier continues to actively discourage them and to urge our students not to participate,” said Kevin Crowley, director, communications and public affairs, in an email statement.

Despite the fact that the university actively discourages these types of gatherings, the scale of the Ezra Avenue street parties has continued to grow over the years, attracting people from other schools and communities, which only adds to the disruption.

“The density of the crowds at the unsanctioned street parties have definitely increased over the years and we remain concerned with public safety,” said Andre Johnson, public information officer at the Waterloo Regional Police Service (WRPS).

The estimated number of people in attendance of last year’s St. Patrick’s Day celebration was approximately 33,000, a nearly 50 per cent increase from the previous year and numbers are only expected to grow despite Laurier’s best efforts to discourage attendance by imposing guest restrictions on residences and university-owned apartments.

While Ezra Aveune parties used to take place solely on St. Patrick’s Day, in recent years students have taken to flooding Ezra on other celebratory days, such as homecoming.

In past years, the street party had taken place solely on Ezra Avenue, but as the crowds continued to grow they have spread out into the surrounding areas, such as Clayfield Avenue, Bricker Avenue and Marshall Street, further impeding traffic and other day to day operations.

The overcrowding which comes along with groups of this size can pose a variety of safety risk to those who choose to partake in the unsanctioned street gatherings.

“With crowds of those sizes, the actions of those in attendance can impact public safety and if one person were to act out, or throw a bottle as an example, or there were any issues that arise that require emergency service to respond to quickly to, crowds of that size make is difficult to get to people who may need help,” said Johnson.

As a way of informing the public of the risks that go along with the Ezra Avenue celebration, the WRPS will be conducting a door knocker campaign to inform people in close proximity to Wilfrid Laurier University and encourage people to opt for a more responsible way to celebrate.

“We want individuals to celebrate St. Patrick’s Day in a safe manner that doesn’t cause harm to themselves or their community. We would encourage individuals who want to enjoy the day to do it in a licensed, legal establishment and not on the street,” said Johnson.

In addition, the WRPS is working with other emergency responders and community planners to develop a plan of action for this year’s St. Patrick’s Day gathering, as they have done in previous years.

The WRPS are concerned about the impacts these parties have on the community as a whole, given that they take place in a residential neighbourhood nearby an elementary school.

“In the past we’ve had issues with public urination and some levels of mischief as well, so it does have an impact on the greater community. Especially when streets are shut down, access isn’t as easily available, and again, the larger community isn’t just those who partake in the unsanctioned street gatherings. So, the impact is greater than just the parties themselves,” said Johnson.

While the Ezra street parties have become somewhat of a Laurier tradition, the scale of these gatherings is growing to a point where it is becoming increasingly difficult to ensure the safety and well-being of both those who attend the parties and the surrounding community members. If things continue on this course, more serious efforts may be taken to address this issue.