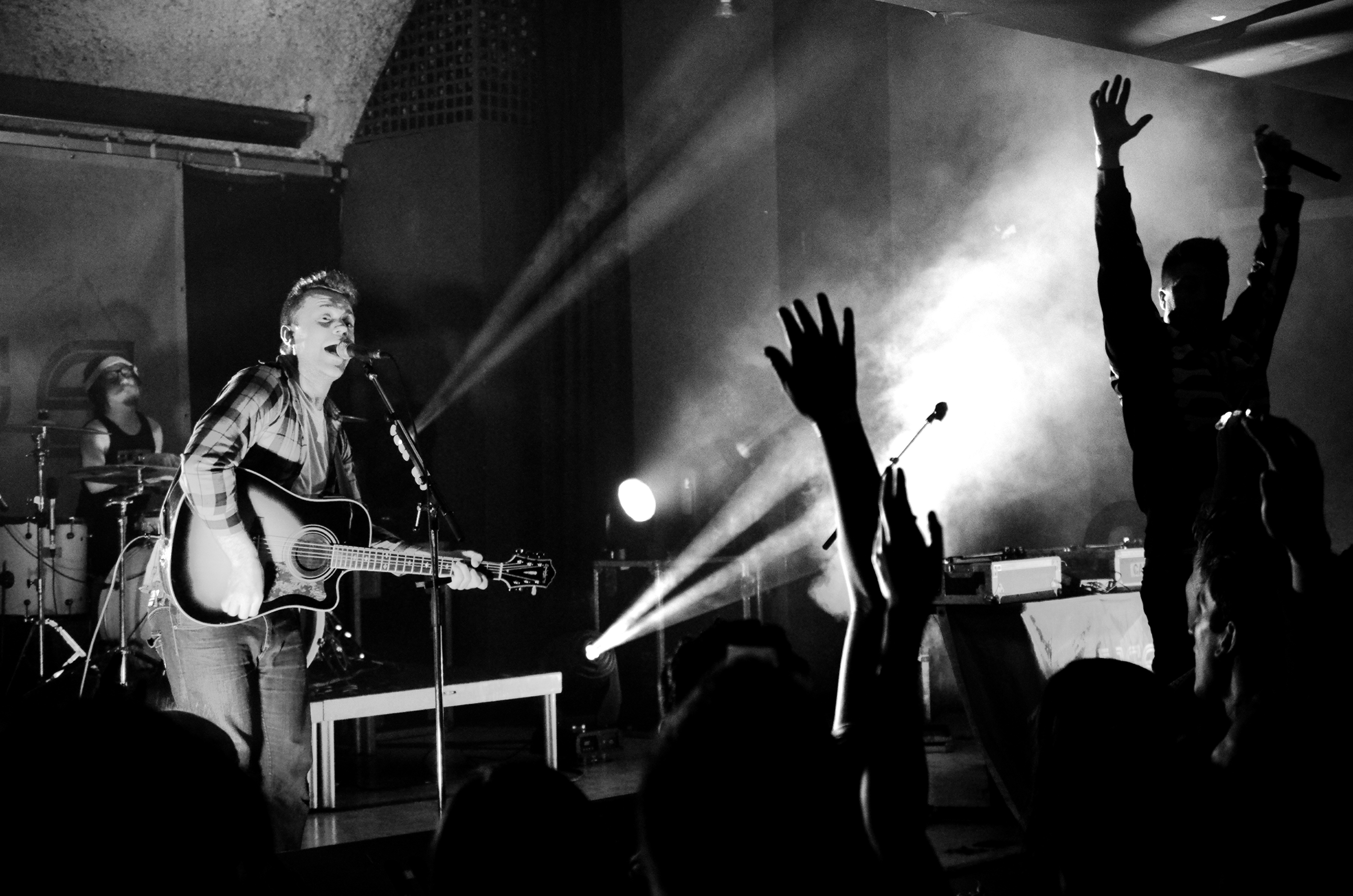 Blue-tinted lights illuminated the recent album cover art for Ubiquitous Synergy Seeker’s—better known as USS—latest EP USS Approved as eager audience members waited for the Friday Feb. 1 concert to begin. Consisting of friends Jason “Human Kebab” Parsons and Ashley Buchholz, USS humbly describes their sound as “campfire after-party.” Parsons controls the turntables and occasionally sings while Buchholz is the lead vocalist, guitar and erhu player.“Erhu is a Chinese violin. I was in London, England visiting my sister. I saw two old Chinese gentleman playing erhus,” said Buchholz in explanation of the confusing instrument. “When I got home, I tried to find lessons, erhu lessons. I had to go to the Pacific Mall. So I wound up taking erhu lessons with Asian senior women on Tuesdays at 10 am.”

Playing at the Turret, USS brought the university down — concert-goers were rocking out so hard that the floor was shaking.  The band played a balanced mix from their two EPs (Welding the C:/ and the recently released USS Approves) and one full-length album (Questamation). USS played to their audience, favouring songs that were better known, such as “Laces Out,” “2 15/16” and their 2008 hit “Hollow Point Sniper Hyperbole.”
USS did not just stick to their own material, occasionally sampling dubstep giant Skrillex to create a mini-Skrillex dance party. They also heavily interacted with the crowd, telling amusing anecdotes and giving the microphone to the occasional audience member. They also did not stick to the conventional method of playing their respective instruments. Parsons used the legs of the microphone stand to scratch his turntable while Buchholz strummed his guitar with a 12-inch 45 rpm vinyl record.Despite the intense energy of their actual performance, the encore only managed to top their incredibly high liveliness. Playing audience favourites such as “Hakuna Matata” from The Lion King and “Wonderwall” by Oasis, the show took on the tone of a giant, drunk communal karaoke bar.

As their final act, the entire band took to crowd surfing. Buchholz ran off stage for a few moments and returned with a life-sized cutout of Bob Marley. Riding the Bob Marley cutout like a surfboard, the band all took turns throwing themselves into the hands of the audience.

Much like the name itself, USS is one of a kind. The story behind their unique moniker varies upon which band member you were to ask. Buchholz’s explanation sounded like a short story: “I was hanging a picture in my bathroom and I slipped and hit my head … I came up with a script for a movie where all the dogs in Toronto ran away and swam across the channel and took over Toronto island. They created a dog kingdom.” After minor protestation and laughter from Parsons, Buchholz continued, “At the same time, I was working at a factory and I was very dissatisfied with the state of my life. I decided to write a script for a movie about myself that would come out in five years. Actually the script that I wrote is the life that we’re living right now. The name of the movie was Ubiquitous Synergy Seeker.”

While Parsons agreed that it was one of the best ways he’s heard [Buchholz] tell it, Parsons explained that “Ubiquitous is everywhere, synergy is togetherness, and seeker, well we all know what that means.” Halfway through the interview, USS turned the tables and began interviewing me about my future aspirations. After responding that I’d like to be a journalist and not living on the streets of Toronto, Buchholz responded with thoughtful advice for everyone.“I was crying my eyes out at the kitchen table saying ‘I just wanna be a musician!’ and she goes ‘Dude. You are a musican. Change your language, you wanna be an income-generating musician.’”