Time to re-think the values of war

Last October, I wrote a piece for this paper in which I bemoaned the sad state of the American elections and urged people to reject voting for the ‘lesser of two evils.’

The following edition featured the only published write-in to one of my editorials: a reader disagreeing vehemently with my opposition to voting.  The reader particularly noted that my comments insulted the memory of the men and women who had died defending our right to vote.

It’s a common argument: something ought to happen because people have fought and died for it.  People have died (allegedly) for our right to democratic government, so implying we shouldn’t vote is disrespectful and means their sacrifice was worthless.

This is not a good argument; in fact, it’s barely an argument at all.  That people at some point died for an ideal has no bearing on how good that idea is.

For hundreds, even thousands of years, ancient empires, most of them thoroughly class-based, dogmatic and authoritarian, ruled the political scene.

Though exceptions certainly exist, for much of our history states have made war to defend and expand violent empires.  Should we defend this sort of political order as so many have died, allegedly, in defence of it?

Obviously, since so many people were willing to sacrifice their livesfor Nazi fascism and Stalinist communism, shouldn’t we respect those ideologies as well?

Many will object, with good reason, that not all German and Russian soldiers believed in their government’s causes, and indeed many were greatly wronged by them.  But why do we insist that Canadian, American and other Allied forces all fought for democracy?

The belief that soldiers die for the causes we want them to isn’t just wrong, it’s extremely disrespectful.  It reduces soldiers, largely ordinary men and women, into stone statues for democracy, more akin to walking war memorials than complex human beings. 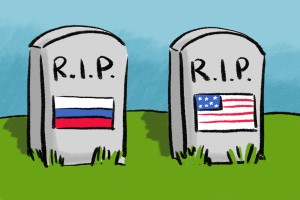 During the World Wars, it was not uncommon for people facing criminal conviction to be offered years in the army or years in prison.  Did they fight for democracy?  What about the professional soldiers who simply see soldiering as a job like any other?  Most sinister, there are certainly people who have joined the armed forces to satisfy an attraction to violence.

Claiming that people, especially soldiers in wartime, have sacrificed themselves for democracy or any other reason reduces human beings with complex motivations to monuments to the state, statues with no individual identity and totally committed to an ideology.  This is an ugly thing to do to any kind of people.

Values, especially when they get entrenched in a political system, are not immortal.  Too often they are corrupted by the force and coercion of the state.

If Americans in WWII died for the dream of democracy, did they also die for Jim Crow and laws oppressing women?  Did Canadians who fought in the Second Boer War fight against racism in the Boer republics while defending it at home and abroad in the British Empire?

It is a noble dream to think that soldiers are paragons of virtue with the unique strength to lay down their lives for a society’s values.  But it’s not always true, and the argument is the last refuge of a conservative impulse ignoring the equivalent sacrifices of others.

Next time you consider shutting down someone’s argument with the old ‘dead soldiers’ argument, stop and think.

Does it really matter?  People believe lots of silly things; hell, people have died for all sorts of stupid ideas.  Maybe it would be better to actually prove your point rather than claim others know best.