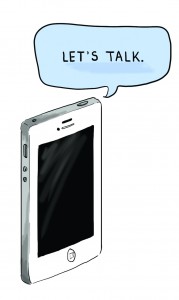 Severe mental illnesses cut with a double-edged sword. On one edge are the biological and social factors that affect the course, which can lead to psychotic symptoms, diminished social competences and depleted social networks.

The other edge of the sword is the stigma, leading to prejudice and discrimination. Such a stigma may be as damaging as the direct effects of the disorder.  In one study, 75 per cent of a group of family members interviewed believed the stigma of mental illness decreased their children’s self-esteem, hindered their ability to make friends and undermined their success in gaining employment.

As with Bell’s recent laudable “Let’s Talk” campaign, there have been many gallant efforts to reduce the stigma and the malignant stereotypes of the mentally ill with protest campaigns, public education programs and on-going contact with the mentally ill.

The National Alliance for the Mentally Ill, the National Stigma Clearinghouse and the Canadian Mental Health Association have all worked tirelessly to raise consciousness about psychiatric illnesses and protest the negative images promulgated through the media, now solidly fixed in the public conscious.

There is however, very little evidence suggesting that protest campaigns succeed in changing peoples’ prejudicial attitudes toward those who are mentally ill. Some people worry that attempts to suppress negative stereotypes about mental illness may actually contribute to the “sticky” stigma.

The second approach to reducing the stigma of mental illness involves providing information contradicting the stereotypes and prejudiced views. Books, videos, films and other audiovisual aids as well as vigorous ad campaigns have been used to highlight false and hurtful assumptions about the mentally ill. For example, the assumption that people with mental illnesses are prone to act with violent behaviour.

While such efforts are well intentioned and praiseworthy, providing sufficient information to counter the stigma is difficult in brief programs and often reach those individuals who already agree with the messages communicated. From the results of many studies, the most effective way to remove or mitigate the effects of the stigma is by encouraging contact and interactions between the general public and those who are known to have mental health issues.

In established forums—where dialogue between persons with mental health issues and mental health professions with the public attending—can address differing perspectives about mental illness and challenge many of the stigmatizing attitudes held by the public.

What appears to be most effective is providing contact with persons with mental illness and is definitely associated with improved attitudes toward those with such difficulties. Further, it has been found that such contact programs are more successful in reducing the stigma when participants can work together, all cooperating on work tasks. In such contexts, people with difficulties are viewed as competent and can bring needed skills, abilities and energy to the work tasks.

From my interactions with those who have worked with people with mental health issues, the significant insight they gain from working with such people is the discovery that these people with so-called “abnormal” thoughts and behaviour, represent distortions and exaggerations of normal patterns of behaviour.

“Abnormal” attitudes and behaviours are always cut from  a “normal” cloth. Such stigmatized people are not suddenly transformed by some malignant force, but rather they retain a humanity common to us all. Communities everywhere can begin to provide the contexts necessary for easy interaction of the public and those afflicted with psychological difficulties.

In such ways, bridges can not only reduce the stigma of mental illness, but provide our communities with a committed and valued group of people who are able to help build local resources, facilities and community support.