The One I Love a strong debut

The One I Love was an entertaining watch, and a change of pace near the end allowed for a strong finish. 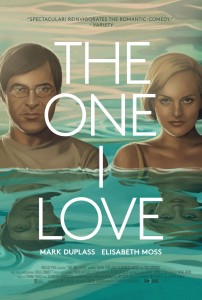 The cerebral romance The One I Love follows a struggling couple as they journey to a secluded country rental by recommendation of their therapist (Ted Danson), in an attempt to rejuvenate their failing marriage. Although they are skeptical at first, Ethan (Mark Duplass) and Sophie (Elisabeth Moss) soon discover the magical properties of the guesthouse.
Without divulging too much, the guesthouse allows Ethan or Sophie to peer into a dimension where their significant other is everything they ever wanted: a dimension where they are always “right.” Conflict arises as jealousy takes grip of the couple.

In his full-length feature debut, author and director Charlie McDowell brings this challenging concept to life through the use of elegant cinematography and an excellent score. The real standout aspect of this film is the acting, as Duplass and Moss are each challenged to play two contrasting roles.

It was easy to appreciate the acting in this film. Watching Duplass shift from the neurotic, uptight and reserved Ethan, to the mellow and relaxed “other” Ethan proved his incredible range as an actor.

Although the differences between Moss’ characters were less apparent, the subtle changes in her nuances and mannerisms made her performance equally as enthralling.

There have been numerous films in the past where actors have taken on multiple roles, but what makes this film standout is the apparent attention to detail put into every scene.

However, despite a strong cast, the film sustained a few missteps in its narration.

At a glance the concept of the film is fascinating, but when stretched to over 90 minutes, it became frustrating. With little variance between scene structure, notably in the middle, the film felt repetitive. As a viewer I felt as though I waited far too long for a shift in pace.

The film is not slow by any means — the ambiguity of the guest house keeps tension high — but as we revisit the same setting, the same concept and the same exchanges, the suspense that was engaging at first quickly becomes monotonous. However, The One I Love was still an entertaining watch, and a change of pace near the end allowed for a strong finish.

The musical score for the film was excellent. The mix of delicate strings and staccato percussion fit the film perfectly.

At its most subtle moment, the arrangement was the perfect accessory to the relaxed setting. In contrast, the unorthodox percussive grooves instilled a sense of urgency at the film’s most suspenseful moments. The film composers Danny Bensi and Saunder Jurriaans’ efforts could be likened to Jonny Greenwood’s work in films such as The Master or There Will Be Blood.

Despite a script that leaves more to be desired, a is a strong debut by newcomer Charlie McDowell. With excellent performances by Mark Duplass and Elisabeth Moss, the film remains a highlight among this year’s independent films.