The best, the worst and the weird of Osheaga 2013

In order to stand out from the crowd at Osheaga, costumes are a must. There were several good costumes this year, but the guy with a fake flamingo on a pole and the tutu with a bright blue wig must have been the best. He came to the festival every day with the costume on. That’s some serious dedication. One of the best parts of having a ridiculous costume is that you can cover some serious ground and force your way through the crowds — just because you have the costume on. Because of that, this guy spent a lot of time near the front of the crowd.

Hip-hop artist Kendrick Lamar gets the MVP for coming in to what is typically perceived as a rock-oriented festival and completely dominating the main stage on Sunday. He got the crowd really excited about the performance and did a great job spanning his whole career with his set list. Casual and dedicated fans alike really enjoyed the set. One of the highlights of his set was definitely ‘Money Trees’ as fans enthusiastically joined in to sing along with the rapper.

Macklemore & Ryan Lewis had awesome lights and visuals. Bringing out Tegan and Sara, a lesbian twin sister duo, for ‘Same Love’, a song about being supportive of LGBT culture and rights, made for a very powerful moment. Right before his finale ‘Irish Celebration’, Macklemore played a video on the huge video screen behind the stage. It was very unique and funny, and served as a great lead-in to his last song.

Worst set goes to K-os. After walking off his Friday set, his rescheduled Saturday set was totally void of love for Montreal. K-os was talking about how much louder Calgary was, and gave repeated shout-outs to Toronto. He also tried to cover ‘Stairway to Heaven’ and ‘Umbrella’ by Rihanna. So, there’s that.

Over the course of the weekend, there were a lot of significant bands, such as Frank Ocean, Azealia Banks who cancelled or were physically unable to play. This was unfortunate because these performers were very highly anticipated. The most notorious such cancellation was punk-rap group Death Grips, who cancelled their Sunday performance last minute. On August 8, it was revealed that Death Grips had no intentions of going to Montreal at all having pulled a similar stunt at this year’s Lollapalooza.

Charles Bradley and His Extraordinaires didn’t seem to draw too many fans. His soul music was unique and he clearly has life experience, but the genre didn’t fit the crowd. Luckily his set didn’t draw on too long, and better-suited bands came on for the rest of the day.

The RFID-enabled bracelet tickets were a great addition. You could even sign into Facebook and post photos right from the island. I didn’t hear about anybody having problems with getting into the festival because their bracelet didn’t work. Also, it was easy to spot other concertgoers when walking around in the city, which definitely gained awareness for the festival in Montreal.

I would really like more of a reason to head to the side stages over the course of the weekend. The bands on the side stages did not draw as much of a crowd as they did so last year. Also, there is money to be made with having food vendors similar to the beer vendors that walk around the site. 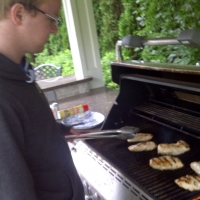