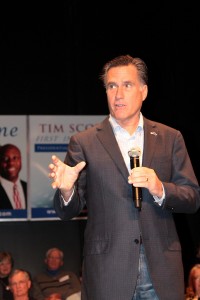 I’ve been trying to pinpoint the exact time that Mitt Romney went from being the plausible post-Obama politician to the “how did this guy get elected to anything?” politician.

Was it the moment he decided it was a good idea to let Clint Eastwood talk to an empty chair?

Was it the time he mistakenly thought Britain was a democratic state and started trashing everything about it?

Or, was it the time he decided it would be easier to get elected by writing off half the country as “victims” who didn’t grow up with George Romney’s silver spoon in their mouths, so he decided to give government assistance a try?

No, it can’t be any of these isolated instances that doomed Mitt Romney’s chances of handing over the keys of one of his umpteen mansions for access to the White House. The only plausible explanation is this: Romney is secretly a devout Democrat who is throwing every aspect of this election — and deliberately sabotaging his chances — so that the President who should be in the political fight of his life can simply take a cake walk back to the oval office.

For someone who prides himself on his managerial and leadership abilities, it’s somewhat surprising that Romney’s campaign has evolved into the official train wreck that it is.

If this is how Romney acted as CEO of Bain Capital, I’m shocked that the company ever became even a moderately successful venture.

The campaign’s decision last Friday to finally release his tax returns is something voters and the media have been begging him to do since he started running for president. Everybody knew he would eventually have to relent and release his returns.

But, for weeks he avoided it, told the press that they had everything they needed to render judgment on him and created an environment where the Senate majority leader was accusing him of paying an effective tax rate of zero per cent.

He had no retort to this unsubstantiated claim because he refused to produce the evidence.

So, Harry Reid’s seemingly contrived and outrageous claim garnered some credibility to the point that even the supposedly sensible media was asking “do you think he really paid no tax?”

Still, no releases were made.

Now, when the most voters are tuned into the election and when Romney has bottomed out in the polls, Obama has more momentum than he ever has before.

Romney has turned off 47 per cent of the electorate by basically calling them lazy citizens looking for a government handout and when he is in the hot seat for politicizing the death of the American ambassador to Libya.

It goes against all political wisdom to add more fuel to the growing fire. This is the time that Romney needs something, anything positive about his campaign.

Not more ammunition for the media currently content with feeding the “Romney is in free-fall” storyline.

The Romney campaign has so far, been characterized by cringe-worthy gaffe after cringe-worthy gaffe from a candidate who is so far disconnected from the average American that he can’t seem to have a five-minute chat with a voter in an Ohio coffee shop without putting his campaign on the defensive.

Add to that a political staff that doesn’t seem to know how to control their candidate or how to build an effective, coherent and consistent economic message, and you have the quintessential recipe for presidential campaign disaster.

The Romney campaign is running out of opportunities to turn this around.

With three debates standing in between the candidates and election day, if Obama gives a passable performance, he’ll be the likely winner of an election where all the economic and political fundamentals were lined up against him.

I never thought that the Republicans were taking this election seriously.

When Michelle Bachmann, Herman Cain, Rick Santorum and Newt Gingrich were all frontrunners at one point or another, it was clear that the plausible Republican candidates were sitting this election out. I just never thought that there would be a nominee so inept that they looked like they were trying to sabotage their own party.