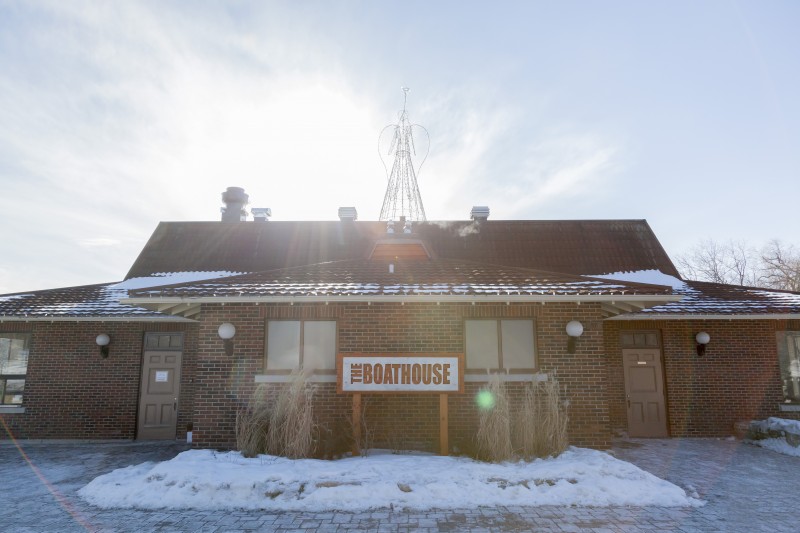 The Boathouse, a lakeside restaurant and concert venue in the heart of Kitchener’s Victoria Park, has reopened after months of renovations. In late 2013 the venue ran into issues with its lease and was closed abruptly. Now, under new ownership, the historic venue is once again open for business.

The Boathouse, which was set to open earlier in the year, faced some critical delays that slowed down the building’s renovation process.

Due to the venue being a designated historic site, strict building code prevented any construction being done on the structural walls and foundation. The renovations therefore focused on the venue’s interior and were done by the current staff.

“We put a lot of emphasis on the inside, doing the work ourselves,” said George Trihenea, service composer at The Boathouse.

“That’s what makes the renovations most distinct, is that the people that work here were here doing the work.”

The renovations also served to increase the Boathouse’s customer capacity. With additional standing room and an expanded patio area, the Boathouse is prepared to host live music events and serve as a restaurant year-round.

“I think the biggest part is opening music up to the whole community,” said Trihenea. “Our whole goal is to open up various genres of music to the community, while opening the restaurant up.”

The Boathouse was popular for its live music events before it closed a few years ago. The venue was also well known to local musicians as a venue that they could have access to.

“We appreciate any music that comes through here, especially when it’s local,” said Trihenea. “I wouldn’t say that there’s something specifically we’re looking forward to, because we look forward to all our artists.”

The restaurant is also featuring a new menu with the goal being to source food locally and keep dishes as fresh as possible.

“We have our own baker that comes in and does our bread, desserts are all made fresh daily, so we’re really trying to do everything from scratch and keep it as fresh as possible,” said Trihenea.

In addition to the focus on fresh, local food, the menu also presents unique items that are designed to be distinct in Kitchener-Waterloo.

“The chef has a secret recipe that he keeps to himself,” said Trihenea.

“I think that’s going to serve to make Boathouse’s overall menu distinct in the community.”

The Boathouse is also looking to focus more on its location as an on-the-water venue in Victoria Park.

A take-out window, another product of the renovation, will allow park patrons to purchase homemade donuts, dubbed “full paddles,” as they enjoy the park. The venue will also be adding additional services to park visitors starting this spring that aim to enhance the visitor’s experience.

“We’re going to be facilitating picnic baskets,” said Trihenea. “So if you call ahead and you want to have a picnic in the park, we’ll put the package together for you.”

The Boathouse hopes to recapture the clientele and popularity it held before closing, and hopes that the facility does more for the community than serve as a restaurant and music venue.

“It’s a memory that we want to create,” said Trihenea. “The music is a big part of that as well. Leaving the Boathouse sweaty and exhausted because you had such a great time is what we’re aiming for.”