Republicans do not deserve recongition 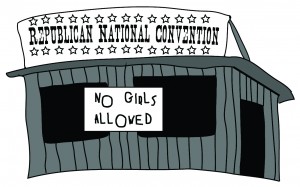 The Republican National Convention (RNC) in Florida ended over a week ago, and it left me bewildered. How do people still take this party seriously?

I understand that conventions for political parties are typically egotistical rallies, but the Republican Party takes this to a completely new level.

Fortunately, this self-congratulatory rally highlighted the deceitful nature of the party.

Undoubtedly, the most criticized speech of the RNC was that of Republican vice presidential nominee Paul Ryan.

Ryan’s speech was riddled with numerous inaccuracies. He accused President Obama of being responsible for closing a General M otors factory in Florida, while the plant began closure under George W. Bush.

Additionally, he accused Obama of being responsible for the downgrading of the American credit rating, while in reality it was because the Republicans threatened to not raise the debt ceiling.

These lies did not go unnoticed, with many news organizations exposing Ryan’s fabrications; even FOX News disapproved of the speech.

This alone suggests how ridiculous the claims of the Republican Party have become.

The fact that the right-wing media has become critical of the far right should signal to Republicans that they should reconsider their dismal political strategies.

While there is some merit to the argument that all political parties bend the truth to some degree, this is far from the most appalling aspect of the party.

That honour, of course, would fall to party members such as Harold Akin.

Akin was recently in the news for remarking that women who are victims of “legitimate rape” rarely get pregnant.

While he later attempted to apologize for his remarks, the fact remains that Representative Akin genuinely believes this is scientifically accurate, and shapes policy around it.

Outrageous, pathetically misinformed positions such as this, highlight that the Republican Party and their members are unfit to serve Americans.

The Republicans’ lack of legitimacy leaves me with one final question: Why does the media even acknowledge the ridiculous antics and drivel of the right wing?

Surely, the news stories regarding the Republicans have their place. It is important that the public be informed of the radical positions of the party, but these articles reach quite far, making the front page of BBC News.

It is certainly not newsworthy, and it shouldn’t be treated as such.

Clearly, the Republicans do not care about truth and legitimacy, and as such, no legitimate news source should acknowledge their nonsensical rallies.

With any luck, ignoring them will result in one of two conclusions, either the demise of the party, or a party which recognizes the importance of integrity.