Laurier International is taking tangible steps to help international students be more conscious of their safety while away from home. 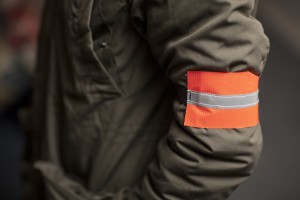 Laurier International is taking tangible steps to help international students be more conscious of their safety while away from home.

One initiative had them distribute reflective arm bands to international students in an attempt to ensure they are more visible as they walk at night.

“One of the responses was, it was put forth by the students and the staff at Laurier International, ‘what could we do to try to prevent this from happening again?’ ” he explained.

He continued that they believed visibility may be part of the issue, because this winter has been fairly dark due to the lack of snow and people seem to be more apt to wear darker clothing. As a result, they thought reflective arm bands would be a good measure to take.

“Students predominantly … they’re walking at night, they’re not getting in a car or taking the bus. There’s a lot of traffic on University Avenue and King Street — that’s one of the busiest intersections in the region. So we wanted to get something out that would help students.”

The armbands were given to international students on both the Waterloo and Brantford campuses. However, Donahue said they have more armbands on order and are hoping to expand their outreach by providing some to Special Constable Services and Foot Patrol to be handed out to students across the campuses.

“I’m happy to say that I see a number of students wearing them,” he said.

This is just one initiative of many that Laurier International is looking to implement for its students.

“We’re also going to work with Special Constables to do a bit of a safety audit for international students to kind of show them, to assess some of the situations around crossing streets and busy streets, and making people aware of how to be safe living in another country.”

Donahue explained that students who have never lived in a winter climate before may not be aware of the safety concerns associated with the winter weather. For example, students may not know about the problems snow banks pose for driver visibility or the distance it takes for a car to stop when the roads are slippery.

“That’s part of what Laurier is about, I think, as a community who are hosting people who have never been to university, we are very proud in our orientation that we provide to students and their transition,” Donahue said. “We have a number of different groups that are on our campus and international students are just one. We modify orientation and our services to meet the needs of specific student groups.”