Over the weekend, news editor Nathalie Bouchard, editor-in-chief Kurtis Rideout and myself reviewed the presidential dishes for the 2018 campaign. Each year the dishes change, last year with only one candidate there was only one meal to try.

The BRARitto is the current Students’ Union president Kanwar’s dish — which was universally accepted as absolutely delicious. But this year, with four candidates, we got to try the four dishes — one of which will remain on the menu until the next Students’ Union election in 2019. 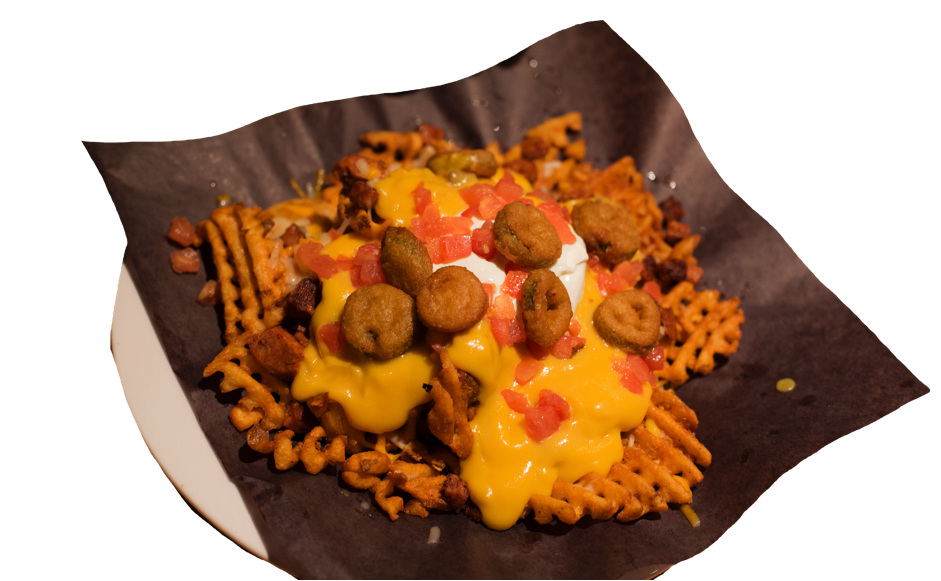 Hands down, this is the most overly-indulgent meal. Not only do you get a hearty helping two kinds of cheese and sour cream, there’s also sausage, waffle fries and jalapeños. It’s not a dish to eat alone. Or maybe it is, I’m not apt to judge. Truthfully, this is the dish I crave whenever my life falls into even the slightest crisis. Like Idris’ dish it has an aspect of comfort but in an entirely different way. It’s the briefest comfort, like bad sex, that leaves you wanting for something healthier and wishing you had made a better choice.

The major downside to this dish is, if you’re lactose intolerant (or just don’t consume dairy products) this dish is a no-go and there’s no way around it. 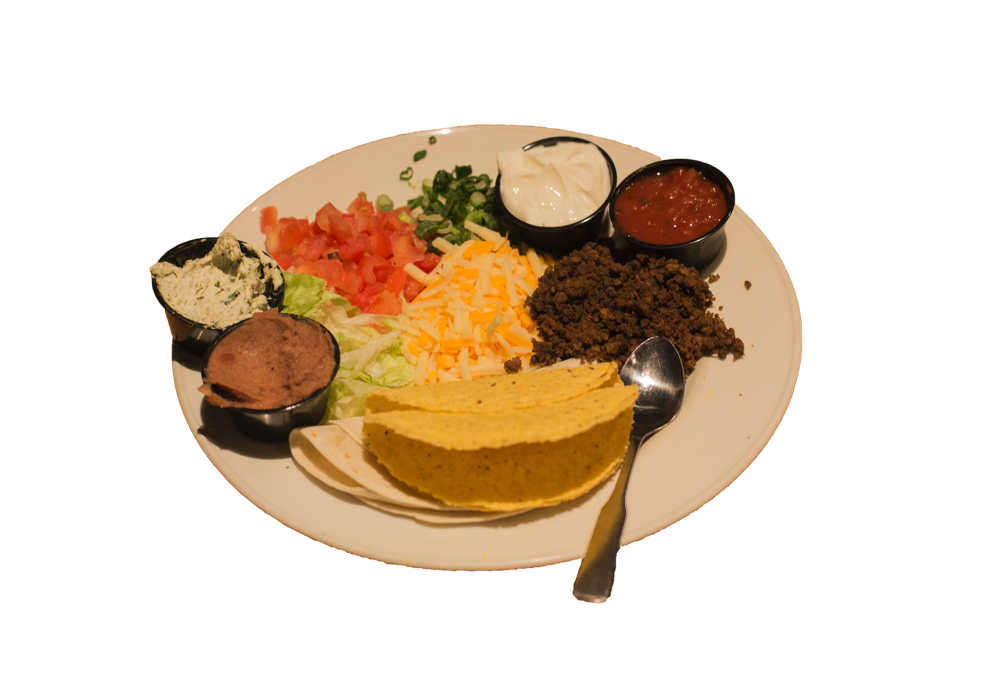 “A choice of soft or hard shell tacos with spicy beef, lettuce, tomatoes, Wilf’s cheese blend, refried beans, green onions and served with a side of spinach dip, sour cream and salsa. Kick it up a notch by adding your choice of Wilf’s wing sauce.”

Is it fair to say that Tariquos are the most uninspired aspect of Tarique’s campaign? Maybe not, but it would be accurate nonetheless. Tariquos are just your standard tacos, with some of Wilf’s famous spinach dip slabbed onto the side. Now, don’t get me wrong, a taco is a taco is a taco. So despite the unoriginality they’re pretty good. I just wouldn’t be running into Wilf’s desperate to get my hands on one, it’s something easily recreated at home. But, I suppose if you’re in dorms, it’s just as good as the home-made thing.

Bonus points to Tarique for providing the option of refried beans, which can easily substitute the beef. Plus, hard-shells are gluten free, so this dish is hitting all the marks for inclusivity. 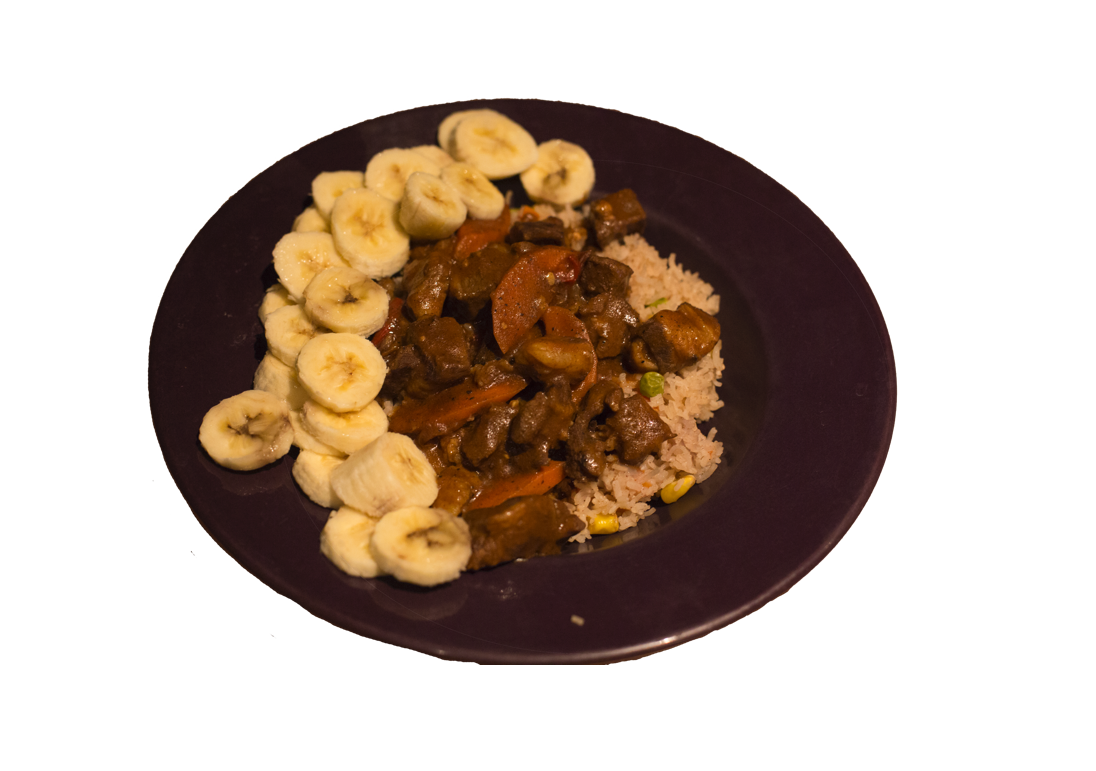 “A Somali dish of roasted lamb, peppers, and onions; served with seasoned rice and a banana.”

Idris’ dish was a favourite among those of us who tried it, earning its spot easily at number one. Those unfamiliar with Somalian food may be put off by the idea of bananas on the side of a meal — however, I would encourage you to set those apprehensions aside. There’s something uniquely comforting about the meal that makes you homesick, even if this is something your parents would never make. There’s also some major bonus points for not just opting for an easy sharable, but instead going for something that Idris actually enjoys. 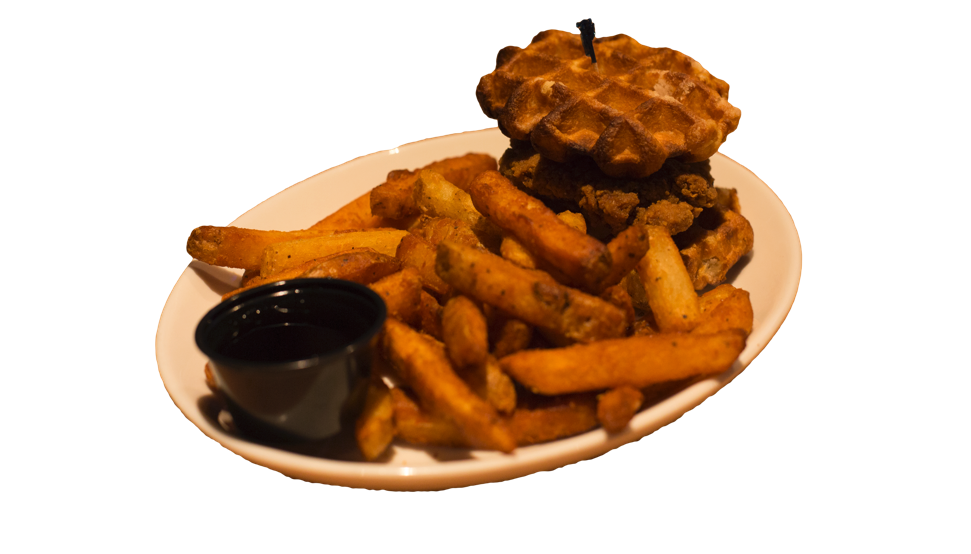 “Fried chicken sandwiched between two fluffy buttermilk waffles and served with maple syrup and a side of fries.”

Chicken and waffles is a pretty common dish, easily found around the tri-city. Despite this, the meal is still satisfying and — extremely — filling. Even if we hadn’t eaten all those other dishes, I seriously doubt I would be able to get through a plate of the chicken and waffles in one sitting. But that’s not necessarily a bad thing. What I’m meriting this meal on its personal aspect. Obviously if Ali wanted to do a crowd pleaser he would have done a sharable like Fletcher’s or Tarique’s meal. But, like Idris’ dish, this has something more personal to it. You get the impression that this is a meal Ali genuinely enjoys and wanted to share with everyone else.