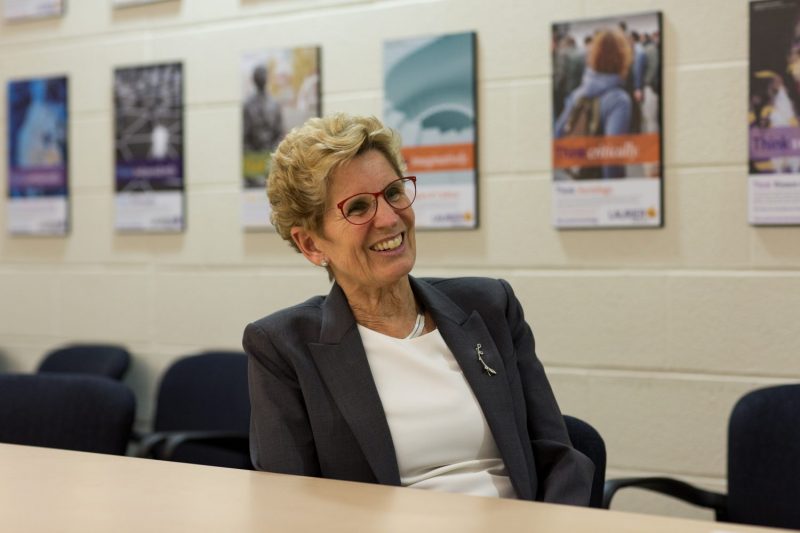 The town hall focused on the problems university students face and how Premier Wynne and the provincial government would address them. Students’ concerns varied.

Some attendees raised issues about the competitive job market and how Premier Wynne could help create more jobs in Ontario. Other concerns focused on Grassy Narrows and increased work to raise the rates of Indigenous graduates.

However, concerns continued to circle back to whether students could trust Wynne with their future.

Her approval rates have dropped down to an all time low of 16 per cent and concerns over the new carbon tax is largely attributed to it.

“It’s not about my personal popularity,” Wynne said during the address.

Premier Wynne continued to assure all in attendance that, with the help of private sectors, as well as the public sphere, Ontario will benefit.

We will not [eliminate the deficit] at the expense of the services for the people.

“As a society in Ontario, we have not done as well as we should,” Wynne said.

She has been touring Ontario’s universities, with her next conference being at held at the University of Guelph. Before coming to the Laurier Waterloo campus, Wynne made an announcement at Conestoga College’s Doon campus and was joined by the Minister of Research, Innovation and Science, Reza Moridi.

Her announcement focused on a $20-million research and development fund which aims to help community college students apply their classroom learning at Ontario companies.

This is not Premier Wynne’s first campus tour, but this time she hopes to raise more awareness of the changes being made to the Ontario Student Assistance Program (OSAP).

“Young people who live in families that are earning $50,000 or less, will be eligible for free tuition or better than free tuition.”

On the provincial government’s official news website, it is explained that families who earn less than $50,000 dollars will also be receiving grants that are sometimes greater than the average tuition.

“About 210,000 students will be eligible … it’s a huge change. We know that the gap between high income and low income students, that it is often the difference between going to college and university and not going.”

Premier Wynne explained that the benefits of the changes being made will not be limited to students coming right out of high school. For graduate students, as wellas mature students, incomes will be put under consideration when and if they apply to OSAP

As a society in Ontario, we have not done as well as we should.

“The 30 per cent off tuition only applied to students coming right out of high school, they were eligable for four years. Now, this new Ontario student grant will be available to students, no matter how long they’ve been out of high school. Also, for adults trying to get back into the system, as well, for graduate students.

At the conference, Premier Wynne said that even with these new regulations in OSAP, they are still working to eliminate Ontario’s deficit, which has been speculated to increase at a minimum of 50 million in the next four years.

“We will not [eliminate the deficit] at the expense of the services for the people,” Wynne said at the address.

“Students have access to eight semesters, the equivalent of four years, of support. If they don’t have that support [from OSAP] in their undergraduate, then they could qualify for it later,” she said, reiterating that the provincial government would still be working toward more affordable and “free tuition” for Ontario university students.

The new regulations to OSAP will be implemented during the academic year of 2017-18.

“We’re trying to give them more support so that they won’t accumulate so much debt.”