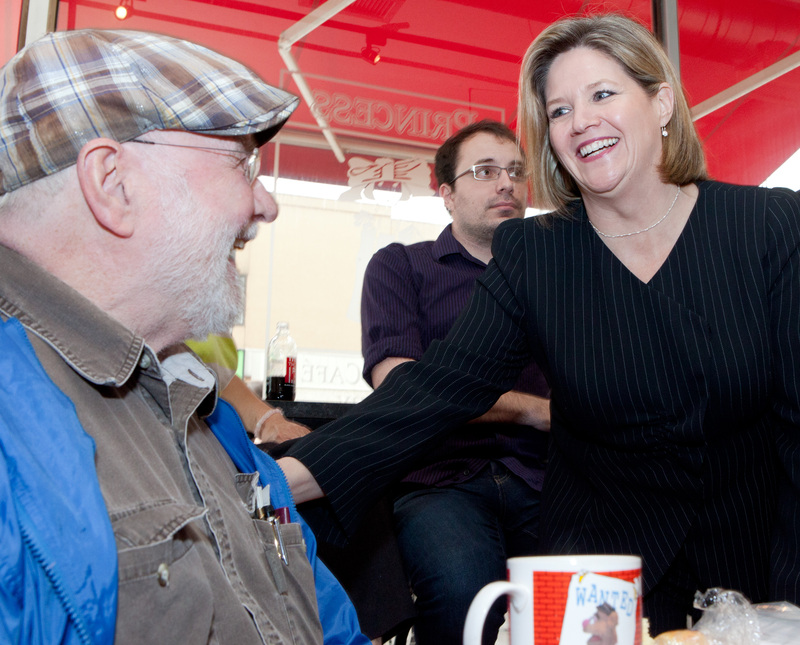 Horwath greeted supporters at the Princess Café in Uptown Waterloo, the previous office location for Isabel Cisterna, the NDP candidate in the provincial election last fall.

Hudak was in town on Wednesday, while McGuinty visited K-W on Thursday.

Throughout her visit, Horwath stressed that politics in the existing provincial government need to be done differently.

“[The public] can vote for a party that can role up their sleeves and that has demonstrated that they are going to work hard on the behalf of the people or they can vote for someone who is representing a party that want all the power, which would be the Liberals,” she explained.

The visits from each leader came a week after long-time PC MPP Elizabeth Witmer resigned to become the chair of the Workplace Safety and Insurance Board under the McGuinty government.

McGuinty himself gave the position to Witmer and a lot have speculated — in particular the NDP — that it was given to Witmer so that the Liberals could have an opportunity to gain a majority government.

Horwath said that the people of Ontario don’t want this, “The Liberals were really out of touch with their two majority governments, they weren’t listening to everyday folks.”

In terms of both federal and provincial politics, the K-W riding has traditionally been Liberal or Conservative. When asked how the NDP will overcome this, Horwath believes that the sense of engagement that already exists in the community will work to their advantage.

Horwath is unsure who will be the local NDP candidate in the upcoming byelection and said they are currently in the process for finding one. Under the discretion of the premier, the byelection must happen within the next six months.

If it happens during September or October, the student population will be a lot larger and may have an impact on the outcome.

“I think every person who has the eligibility to vote should be encouraged to vote. So it’s whether its students or not, anything we can do for them to participate in the electoral process is extremely important,” Horwath explained.

“I’m hopefully when it does come that the campaign is one that does justice of this province. So it’s about ideas, it’s about issues, it’s about real important things, as opposed to just political power interests of the government.”