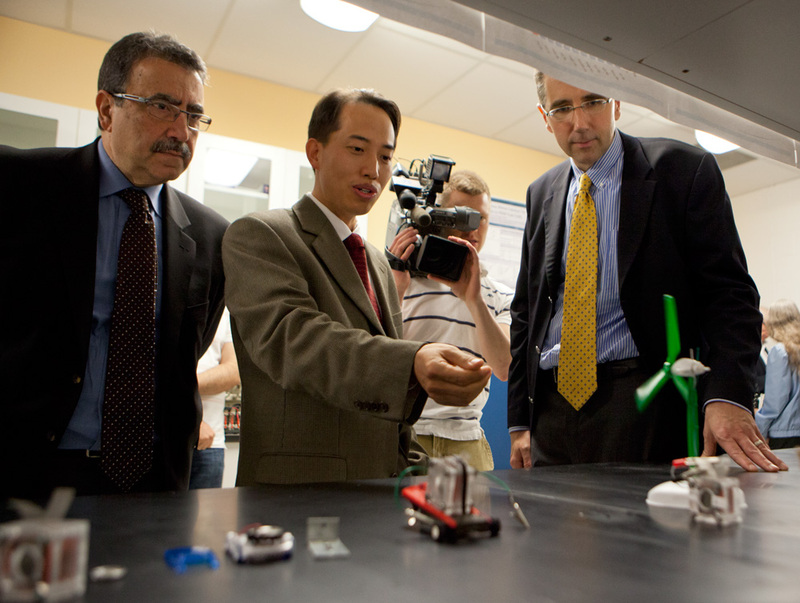 11 local research projects will be getting a helping hand from the Ontario government.

Kitchener Centre MPP and Minister of Community and Social Services, John Milloy, joined representatives of Wilfrid Laurier University, the University of Waterloo and Perimeter Institute at UW Friday morning to officially announce the recipients of this year’s Early Researcher Awards (ERA). The ERA program is designed to help recently-appointed Ontario researchers carry out their projects.

Milloy, who until last October’s provincial election served as the minister of training, colleges and universities, stressed the role that supporting research can play in helping Ontario’s economy.

“In a time such as now, there is always the question, ‘how do we create jobs?’ And we all know there’s no easy, straightforward answer, but there are answers,” he said. “One of the biggest surrounds the notion of ideas. How do we encourage people to come up with great ideas and explore them? How do we move through basic research and how do move through to commercialization and jobs? What it involves is supporting people at all stages of that process.”

Currently, the ERA program helps fund 63 projects at 19 institutions, in nine Ontario cities. University of Waterloo president Feridun Hamdullahpur said it’s no surprise that nearly a quarter of the projects are being done in Waterloo.

“We often wonder, what’s in the water in Waterloo?” he quipped.

“Two universities, plus Perimeter Institute, this is living evidence that this place is where innovation happens.”

Of the 11 local research projects, 8 are being executed at UW, two at Laurier and one at the Perimeter institute. The University of Waterloo researchers are receiving a total of $1.12 million, while Laurier’s two projects are getting $280,000 and Perimeter Institute $140,000.

The projects stretch across all academic disciplines and involve the study of everything from quantum mechanics, to cultural integration in Greek literature, to non-virus based gene therapy.

“I’ve been at Laurier since 1996 and in the research office since ’98 and back then it was a one-person office. We were in the same office as graduate studies,” she said.

“Over the years, it’s grown to the point where now we have a full VP: research, who reports directly to the president and the office is growing again to adapt to the changing research environment externally.”

Baltzer’s research focuses on climate change effects on Canada’s boreal forests. Most of this work takes place in the Northwest Territories, studying permafrosted areas. Barclay, meanwhile, is currently researching unfairness in the workplace and how people overcome psychological traumas caused by this unfairness.