Although St. Patrick’s Day on Ezra rings significant to many, these celebratory and un-sanctioned events are not exclusive to our school. Unsanctioned street gatherings are becoming increasingly frequent, widespread and infamous amidst other Ontario university towns and cities.

The day-long conference was organized in order for these representatives to discuss the challenges associated with these events and how to effectively respond and prepare for unsanctioned street crowds.

“The strong attendance [at this conference] clearly demonstrates that the phenomenon of unsanctioned street gatherings is not unique to any one university or community — it is a common challenge for many universities and many communities,” said David McMurray, Laurier’s vice president of student affairs.

“The conference also reflects the firm commitment of universities to work collaboratively with community partners and students to find effective solutions to the serious concerns associated with unsanctioned street gatherings.”

Some of the more pressing concerns discussed by representatives were the safety and security of students, as well as members and residents of the community. Additionally, it sought to address the burden that is placed on emergency response teams and the public cost of supporting extra ser-vices.

As well, the high influx of out-of-town visitors for such celebrations created higher numbers of illegal activity — 73 per cent of charges laid at last year’s St. Patrick’s Day party on Ezra were against students who don’t attend Laurier.

“The conference discussions generated numerous ideas for universities and community partners to consider … future activities include world-cafe-style community consultations, research into the most effective ways to change the behaviours that lead to unsanctioned street gatherings and ‘town-and-gown’ conferences, such as the National Forum on Town and Gown Issues and Opportunities being hosted by Brock University in June 2019,” McMurray said.

“We are proud of our Laurier students, our reputation and the Golden Hawk community we all represent. Past behaviour on St. Patrick’s Day has made it necessary to remind students that the university actively discourages these gatherings,” McMurray added.

“As ambassadors of Laurier, please hold yourselves to the highest standards outlined in the Non-Academic Student Code of Conduct — and expect the same of others … Respect the law enforcement and emergency services officers who are working to keep you and our community safe, and allow them to do their jobs. Respect our community neighbours and their properties.” 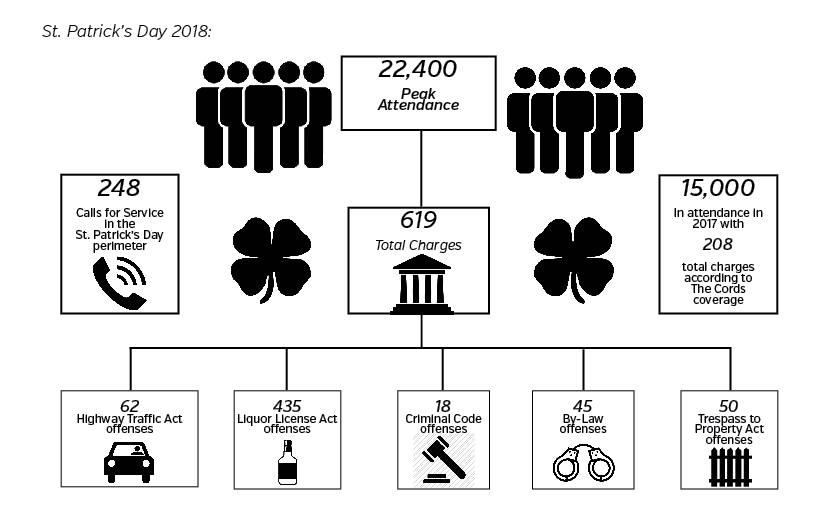