Ish and Chips owners start over 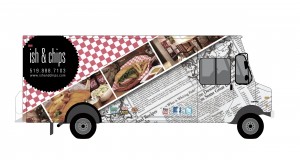 After a fire burned down the much-loved Uptown establishment, Ish and Chips’ owners are in the process of opening a food truck for the Waterloo area. With the rebuilding of the establishment still in question, the owners will open a food truck until they find a permanent location.

Kamil Mytnik, the son of the Ish and Chips owners, has been working to build the food truck and get it running. However, they have encountered struggles, which have brought the endeavor to a temporary halt.

“We’re having some problems with insurance, they’re a little hesitant to insure us because of the fire and they’re basically under the impression that we would be susceptible for another fire or some kind of major loss,” Mytnik said. “We’ve had a couple of denials, unfortunately, but we’re still pushing through. The truck is done and finished, all that is needed are a few minor things.”

The restaurant, which caught fire in August from unknown causes, was also the subject of a charity concert held by Starlight and the Uptown Waterloo businesses to raise money for the victims of the fire. Mytnik shared that he and his parents would like to have a running restaurant in the Uptown Waterloo area again, but it is difficult as there are no vacancies available.

Mytnik exclusively shared that an Ish and Chips establishment will be opening on Richmond Street in London near the University of Western Ontario. With renovations started last week, the restaurant is expected to open in late May or early June.

As for the food truck, Mytnik says that the right timing is needed.

“Even if we had been insured and had all of those small things taken care of now, I’m not sure how much sense it would make to launch it in this abysmal January weather,” Mytnik reasoned.

“It may make a little bit more sense to launch it when the weather is more ideal in the spring.”

For Waterloo resident Andrew Forbes, who frequently stopped into Ish and Chips on his lunch break to indulge in their famous haddock and chips, the food truck cannot come soon enough.

“Ish and Chips was a place where people could connect with each other and it was sad to hear about what happened with the fire,” Forbes said.

When he heard that Ish and Chips was in the process of making a food truck, Forbes was relieved. Cravings for his favourite lunchtime meal aside, Forbes believes that this will bring the community back together.

“I think that the arrival of the food truck will remind the residents what Ish and Chips is really all about,” Forbes said.

In the meantime, Mytnik has been making plans for the launch of the food truck until the insurance issues get settled.

“I have really high standards for myself with the food truck. I have this vision to really put out this kick- ass food truck that can be easily tracked and people can get a hold of us very easily through GPS applications,” Mytnik said.

“There are great opportunities to make Ish and Chips a really cool mobile restaurant on wheels.”