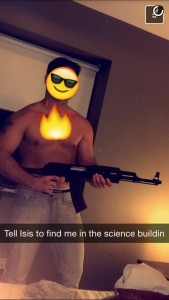 A week after Wilfrid Laurier University went into lockdown over a threat posted on the online forum 4chan, the school and Waterloo Regional Police Service began an investigation into a picture from the Snapchat account, “Laurier Snaps.”

Mike Haffner, staff sergeant at WRPS, said the police were contacted after the picture was released on Snapchat last Friday.

“Once that person posted that picture, our services contacted and we reached out to Laurier Special Constable Service and then we put the plan together to for this past Friday,” said Haffner.

The photo shows an image of a male whose face is covered by a giant smiley emoji holding a gun believed to be a replica. The caption reads, “Tell Isis to find me in the science buildin.” The WRPS currently have no suspects.

Haffner noted it’s important from a security perspective to ensure the safety of the Laurier community.

The lockdown, which took place on October 16, was triggered after a threat was posted on the online forum 4chan that mentioned an attack on the Science Building.

According to Haffner, some would believe the picture was taken out of humour, yet it caused anxiety and fear among the Laurier and Waterloo community.