I survived brain surgery… now what? 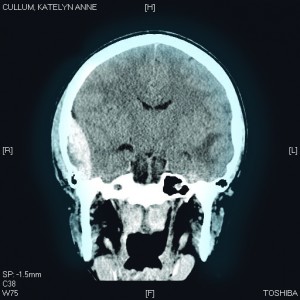 “I never thought this would happen to me.” Those are the words out of everyone’s mouth after they have gone through something bad. No one expects it, no one is prepared for it and no one knows how to deal with it.

Unfortunately, I spoke those choice words at the beginning of October, when I woke up in an Intensive Care Unit (ICU) from a medically induced coma due to my brain surgery.

I wish I could follow it up with a wicked story that makes me seem cool and dangerous, but this all happened because I went with my friend to get a piercing and fainted because I saw him flinch.

I ended up with staples in the back of my head because I had cut it open and was transferred to Hamilton General Hospital so my brain could be monitored. This was because I had an epidural hematoma, which is an accumulation of blood between the inside of my skull and outer covering of my brain.

I was admitted on a Monday and the following Saturday I was rushed into emergency surgery that required the removal of a portion of my skull because I had a seizure since my brain was swollen and bleeding.

Fortunately, I don’t remember any of this (that Saturday also happened to be Homecoming, so I know none of you remember that day either) and woke up in the ICU about three days later.

This story isn’t intended to make you feel sorry for me, that is the last thing I want. But I do want to talk about this because I know that other young people have experienced a brain injury similar to mine and I want to express how difficult it is to get back into the swing of things, especially school, when you’re hit with such an event.

“It goes without saying, there is a lot going on in the brain,” said Jayar La Fontaine, the acquired brain injury system navigator at the Community Head Injury Resource Services. It’s a complicated organ and damaging it can result in serious consequences and obstacles.

I don’t consider this a burden; I won’t say that I’m glad this happened to me but I’m a firm believer in the common phrase that “everything happens for a reason.”

To all my friends reading this, I’m talking about you, so pat yourself on the back.

Apparently the first thing I asked about when I woke up (aside from making my dad promise to buy me the new iPhone 5. Yes, I’m a brat) was  school. I don’t know if that makes me a dork or just makes me worrisome, but it was a thought that was constantly on my mind.

Being a fourth-year history student, foregoing the semester was not something I could afford. But at the same time, I knew the obstacles I’d be facing.

Catching up on missed seminar readings was something I feared but wanted to conquer. Thankfully, I have three amazing professors that were completely understanding and willing to work with me to succeed this semester.

That is essentially where the easiness ends.

Because my brain is still swollen from the surgery, the front part is pushing on my eyes and making my vision unfocused. My eyes are essentially back to normal now but after I got discharged I was seeing double, even triple.

Seeing double and being in the Concourse is especially terrifying because since it’s already such a busy place, when everyone is multiplied I just feel like I’m at a concert about to be pushed into a mosh pit.

So now that I’ll forever be under the label of “brain injury girl,” I don’t know how to continue my life.

For me, the hardest part of this whole thing has been taking the severity of my injury seriously because I don’t remember any of it. So when I tell people about the fact that I had brain surgery, I can’t help but laugh.

I’m not laughing at my injuries, I know they are real and life threatening and I appreciate all the work my doctors did to keep me alive. But try saying “I had brain surgery” out loud, it feels weird right? Especially as a university student.

Of all the stupid things I’ve done the past three years, drunk and sober, I get this injury from fainting. That being said, I’d like to take this time to advise you all to just think through all the precarious things you all do. I’m not saying you should live your life in fear, but the brain is important and should be cared for.

When asked how to take preventive measures in regards to brain injuries, Azim Ahmed, communications and fund development officer at the Ontario Brain Injury Association (OBIA) stressed that “the most important thing is being aware of what’s around you.”

He went on to say that obviously it’s impossible to prevent accidents from happening, but being aware of your surroundings and being logical in common situations, like “when riding a bike, obviously helmets are important,” is smart. Fontaine added that you should “really think about the risks you are taking.”

Another thing I’ve found difficult with this whole situation is that, since a brain
injury is internal and the only thing that tells people I have one is my hidden scars and the shaved part of my head, most people don’t believe it.

I was fortunate enough to get through this whole thing as basically the same person I was before. No personality changes, nothing. And I’m so thankful for that. But being on a neuro ward for two weeks, I did encounter a lot of other patients who, unfortunately, are suffering  from and are defined by their brain injury.

To most of society, they are just considered “dumb.” Not everyone thinks that, but most severe brain injuries alter your intelligence, the way you think, the way you act and we perceive people who have suffered from them as less normal than the rest of us.

According to the OBIA, brain injuries are the number one killer and disabler of people under 44. So clearly, we need to be more aware of internal injuries. They’re real and they happen to students.

Especially since young people are so active, brain injuries during sports are common. According to the OBIA, one in five sport-related injuries are brain injuries.

Another common cause of brain injuries is motor vehicle accidents. Fontaine expressed that the 18 to 22 age group, is “highly susceptible” to those types of injuries and urged precaution.

So the next time you see someone acting out, don’t be so quick to judge. Don’t assume that they are just being dumb and remember that they could have a story like mine and just didn’t get as lucky.

One in 26 Canadians are living with an acquired brain injury, according to OBIA.

One really sweet part of this whole thing though, and when you see me on campus you can ask, is that part of my skull is still at Hamilton General Hospital. They took it out in surgery. And since my brain continued to swell, they didn’t put it back in. That is what defines a craniectomy.

So there is a spot on my head that is soft and squishy and so cool. Obviously, I don’t let people push on it, but if you’re interested in feeling a skull-less head, don’t hesitate to ask, and you can run your hand over it.

Within the next hour, six Canadians will suffer from a brain injury. Whether that is from fainting in a piercing shop, or in another accident, it is a common occurrence.

But it’s uncommon in the sense that it’s not visible. Many young people could be suffering from a brain injury.

This accident has changed my life, but for the better. I’m grateful for all the outpour of love and support I’ve received, and adapted a new outlook on life since I survived death.

Now, I have really short hair and have to wear a medical alert bracelet that reads “partial right skull missing.” Don’t mess with me.

The hidden struggles of women with ADHD: how overlooked symptoms can lead to problems later in life

What’s on the menu? Local restaurant deals in Kitchener-Waterloo

Supporting independent cinemas during the pandemic: there’s nothing like the in-person, movie-viewing experience