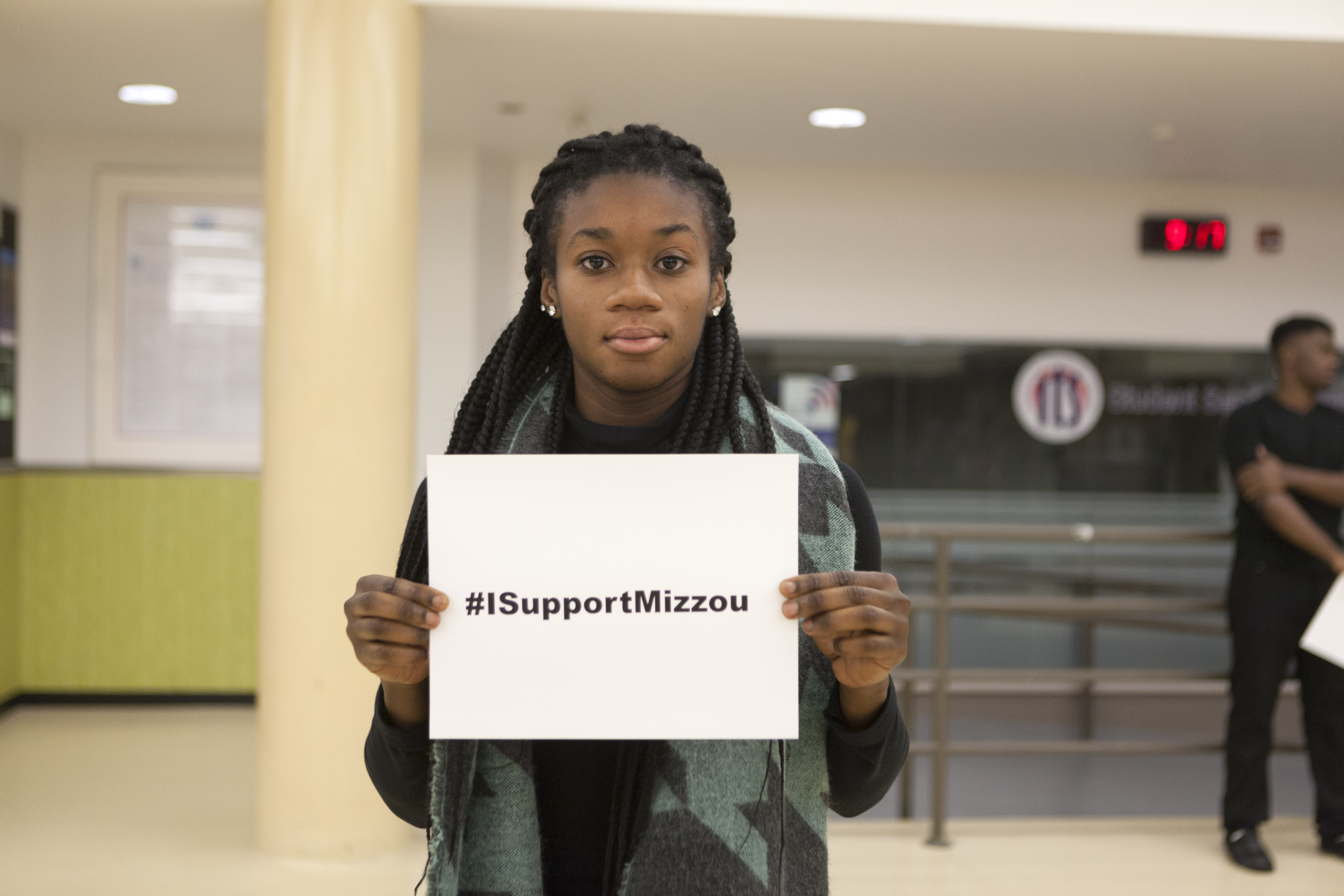 Students had the opportunity to show their support for Missouri Thursday. | Photo by Jessica Dik

On Thursday, November 12, Wilfrid Laurier University’s Association of Black Students came together in the Concourse to film their responses to the issues of racial discrimination at the University of Missouri.

Holding white signs with the sentence, ‘#IStandWithMizzou,’ members of ABS shared their experiences of what it means to be a black student on campus.

“With everything that’s been going on with the racial tensions in Missouri, we just felt as an executive team that we needed to do something,” said Janaya Thomas, ABS president and fourth-year communications studies student.

Since September, staff and student protestors at the University of Missouri called for college president Tim Wolfe and chancellor R. Bown Loftin to resign, both of whom did not respond to incidents of racial prejudice on the school’s campus.

In 2010, two white students were charged and arrested for dropping cotton balls in front of Missouri’s Oldham Black Centre. A year later, a student was given probation for racially-charged graffiti in a dormitory.

The act of protest included one graduate student, Jonathan Butler, who went on a hunger strike and the university’s football team who refused to play until Wolfe’s resignation. Wolfe officially resigned on November 9.

“We just felt as an executive team that we needed to do something”.

After it’s released, Thomas hopes the video will generate discussion about what security looks like at Laurier and what the protocols are would be diverse students were targeted.

“This is kind of like a small discussion that we’re bringing to the university at large and letting the students know in Missouri that we’re here standing in solidarity to support them.”

Along with other associations at the Diversity and Equity Office, ABS partnered with other student groups at McMaster University, the University of Guelph and Ryerson University in creating the video.

Thomas wants Laurier students to know that although the video was a call for specifically black students, anyone is encouraged to get involved with ABS.

“I think that was just important because of the severity of the event so this right now is kind of a healing process and an outlet for black students to talk about what’s happening,” she said. “We definitely want to continue the conversation and we want to invite other students and our allies to come out and talk about what injustice looks like and what prejudice looks like.”

The video will be released on Wednesday through ABS’s Facebook page.

Burnout has increased during the COVID-19 pandemic